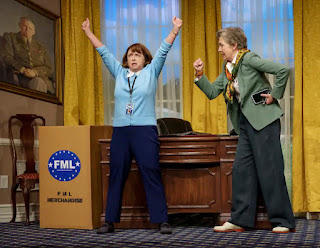 Sometimes you have to laugh to keep from crying. At least that’s the approach two recent plays have taken with the current political morass in which we all find ourselves.  Selina Fillinger’s farce POTUS (that’s the acronym for President of the United States) is currently scheduled to play at Broadway’s Shubert Theatre through Aug. 14. Steph Del Rosso’s awkwardly named satire 53% Of (its title refers to the percentage of white women who voted for Donald Trump in 2016) ends a brief two-week run at Second Stage’s uptown space the McGinn/Cazale Theater this weekend.

I don’t know if it’s a coincidence but both boast all-female casts and nearly all-female creative teams. Heck, POTUS’s subtitle is “Behind Every Great Dumbass Are Seven Women Trying to Keep Him Alive” and its starry cast is led by Julie White and Rachel Dratch, both of whom were nominated for Tonys for playing the beleaguered chief of staff to the unseen president and his bewildered personal secretary. The young actresses in 53% Of aren’t yet as well-known, but they gamely play multiple parts, including the male roles, in their production.

Both shows, written by twentysomething playwrights who clearly lean toward the left end of the political spectrum, made me chuckle but I wasn’t totally comfortable with the underlying message that either was trying to get across. The women in POTUS—be they the reporter who covers him, the press secretary who covers for him, the mistress who, ah, services him or the First Lady who puts up with him—all enable the man-child in the Oval Office.

They may take time out to strike power poses or to give one another you-go-girl pep talks but they all miserably fail the feminist Bechdel test because although there are a whole bunch of women in the play, including the president’s lesbian sister, all they do is talk to one another about a man. And all of their efforts are directed at smoothing over his gaffs (it’s a Republican administration) and keeping their guy in office.

I know. I know. It’s just a farce. And Susan Stroman’s jaunty direction and Beowulf Boritt’s turntable set keep the antics moving, complete with the requisite slamming doors. Plus at the curtain call there’s a crowd-pleasing dance and sing-along set to a Joan Jett anthem. Hillary Clinton even went to see the show this past week (click here to read about that) and she had a great time.

But in the end, I came away from the show feeling that Fellinger (click here to read more about her) left the blame for the political mess on the shoulders of the women and I couldn’t shake the additional feeling that when the music ended, the characters would end up right back where we found them, holding up some male doofus instead of doing their own thing. 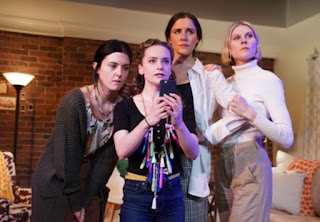 I had hoped that 53% Of was going to give me some insights into why women behave that way. The play opens shortly after the 2016 election at a meeting of white suburban Trump supporters who are congratulating themselves on their man’s win but who become uncomfortable when a newcomer, attracted by their social media postings, arrives proudly wearing a sweatshirt emblazoned with a Confederate flag.

Alas, the play’s title is a misnomer and instead of digging into the dynamics of how the suburbanites reconcile their support for Trump with their unease for what he stands for, the play hopscotches to other settings: a bro-style gathering of the husbands of the women in the first scene, a get-together of self-consciously progressive young white women in an urban setting and finally a meeting at a bar between one of those white progressives and a black friend.

The cast worked hard as they moved from one scene to the next and Lux Haac’s costumes helped a little but director Tiffany Nichole Greene couldn’t figure out how to make all of the quick changes work. So I was confused by the third scene, uncertain if its young women were the rebellious daughters of the women and men in the first two scenes or completely unrelated characters.

The result was a series of SNL-type sketches that not only lacked depth but flicked at the idea that there’s little difference between the white women who voted for Trump and those who didn’t.  Which I don’t believe is true and didn’t find funny at all.