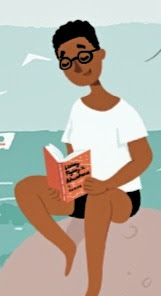 The months of July and August are traditionally a quiet time for theater but the summer is still my favorite time of the year. My husband K says that’s because my birthday is in the summer and so it’s how I first got to know the world. Whatever the reason, I love the languid days, the warm nights and the time I get to sit on our terrace, sipping a cool drink (I’m back to Cosmos this year) and reading. I’ve also come to love sharing my annual summer reading list for those of you looking for something theater-related to read while you kickback at the beach, in the backyard or on a patch of grass or piece of rock in the park. This year’s list has novels, memoirs and biographies, a lot of them about Tennessee Williams:

City of Girls by Elizabeth Gilbert. Although best known as a non-fiction writer and the author of the you-go-girl bestseller "Eat, Pray, Love," Gilbert has also written several novels and her latest is centered around an off-Broadway theater in the 1940s that is home to a motley crew of misfits led by a lesbian version of Auntie Mame. Or at least that's what the best half of the book is about. The story peters out whenever the location shifts but the hard-partying show girls, moody writers and show-must-go-on actors make for good company and an easy summer read.


Exit Stage Left: The Snagglepuss Chronicles by Mark Russell.  This graphic novel tranposes the Hanna-Barbera cartoon characters into the theater world of the 1950s when the House Un-American Activities Committee was on the prowl. Arthur Miller and Lillian Hellman make cameo appearances but the titular theater-loving mountain lion steps in for Tennessee Williams and anchors a story about the committee's oppression of homosexuals. It's an offbeat but still moving way to look back at that reign of terror.

Famous Father Girl: Growing Up Bernstein by Jamie Bernstein. Leonard Bernstein’s eldest daughter offers an intimate look at her dad, warts and all. And there were plenty of warts including her father’s drug use and decidedly unMeToo behavior with young men, some even younger than his own children. But she also recalls his exuberant love for his family and the professional brilliance that allowed him to create such magnificent scores as the ones for On the Town and West Side Story. Plus there are lots of delicious anecdotes about the family’s famous friends, a who’s who from the Golden Age of American theater that included Betty Comden, Adolph Green, Mike NIchols, Jerome Robbins and Stephen Sondheim.

Leading Men by Christopher Castellani. Tennessee Williams wrote many of his greatest plays during the time that he and Frank Merlo, a working class guy from New Jersey, were a couple. And although far from monogamous, their 15-year relationship may count as one of the midcentury's greatest love stories. Castellani’s novel offers a fictionalized version of a pivotal summer in their lives and its aftermath. I got impatient with chapters devoted to a character inspired by Williams’ longtime confidante and literary executive Maria Britneva but when the book focuses on Williams and Merlo, it’s terrific.

A Player and a Gentleman: The Diary of Harry Watkins,Nineteenth-Century U.S. American Actor, edited by Amy E. Hughes and Nancy J. Stubbs. It’s never been easy to be an actor but it was really tough during this country’s Antebellum years when actors had to be ready to perform as many as a dozen different plays in a week and supply their own costumes. A well-regarded actor who worked alongside some of the era’s greats including Edwin Booth and Edwin Forrest, Watkins kept a journal and the best bits are excerpted in this chronicle of his journey from playing “walking gentleman” parts in traveling companies for $6 a week (less than $200 in today’s money) to becoming an actor-manager. It’s catnip for theater history buffs.

Sister Carrie by Theodore Dreiser: First published in 1900, this novel from the American canon isn’t really a theater book but it provides a fascinating look at the theater world during the Gilded Age as its determined titular heroine transforms from a poor insecure shop girl into a celebrated leading lady of the stage, blithely ruining the lives of several men as she makes her ascent.

Too Much is Not Enough: A Memoir of Fumbling Toward Adulthood by Andrew Rannells. Theater fans know Rannells as the original Elder Price in The Book of Mormon and more recently as Larry in the 50th anniversary revival of The Boys in the Band that featured a cast of all proudly gay actors. But neither of those shows makes it into this delightful memoir of selected stories about the actor’s childhood as a boy actor in his native Omaha, Nebraska, and his first seven years as a struggling actor in New York. Get the audiobook if you can because listening to Rannells narrate his exploits is like dishing with a good friend while sipping a well-chilled cocktail.

Trust Exercise by Susan Choi. Centered around a group of students who attended a performing arts high school in Houston during the 1980s, Choi’s coming-of-age novel, inspired in part by her girlhood experiences at such a school, won raves when it came out earlier this year. As might be expected, it features a charismatic but slightly mysterious teacher who serves as a mentor to the students who all compete to win his favor. But the narrative, which extends into the students’ adulthood, veers from the predictable and ends up posing significant questions about the role of art, friendship, memory and revenge.

Temper by Layne Fargo. Fans of David Ives' psychological thriller Venus in Fur will undoubtedly get a kick out of this Fifty Shades of Greyish story about a thirtysomething Chicago actress who gets cast in a new play by the domineering artistic director of a theater company known for doing edgy work. The play is a two-hander about a troubled married couple but the novel's cast of characters include the company's female co-founder, the actress' male roommate and a reporter who covers the local theater scene. Nearly all of them are bisexual and hot for one another, which sets the stage for jealousies, rivalries and some serious S&M entanglements.

Tennessee Williams: Mad Pilgrimage of the Flesh by John Lahr. The one-time theater critic for The New Yorker won a National Book Award for this biography when it came out in 2014 and it’s easy to see why. The book not only provides an intimate (at times too intimate) chronicle of the playwright’s life but also analyzes each of the more than three dozen plays he wrote. As Lahr tells it, Williams drank too much, was sexually obsessive, fretted constantly about his reputation and experienced several nervous breakdowns but he never stopped writing. And although his later plays may suffer in comparison to his early masterpieces, glimpses of Williams' brilliance can be found in those works and in the letters he exchanged with his wide circle of friends and from which Lahr wisely quotes extensively.

And if you're looking for still more to read, below are links to my lists from previous years: