"In the Green" is Too Monochromatic 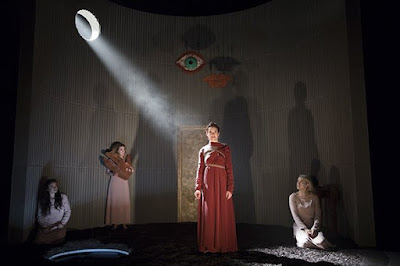 As their name suggests, chamber musicals tend to be smaller than traditional song-and-dance shows. Quirkier too. They also tend to be beloved by critics more than by average folks. Or than by me. In the Green, the almost defiantly idiosyncratic musical now playing at LCT3 through Aug. 4, checks off all those boxes.

Written and composed by Grace McLean, it tells the story of Hildegard of Bingen, the 12th century mystic who, at a time when embroidery was the major creative outlet for most women, founded monasteries, composed liturgical music, wrote theological and scientific treatises, staged the first morality plays, and later became both a canonized saint and a feminist icon.

Hildegard lived to be 81 and her long life clearly offers a lot of juicy material for a show to work with. But McLean focuses on the years of Hildegard’s life when, after her parents consigned their eight-year-old daughter to a monastery, she was isolated in a cell for decades with an older religious woman named Juta.

The young women don’t divide up the role by age as the performers in Summer: The Donna Summer Musical and The Cher Show do. Instead, they portray parts of the young Hildegard’s fractured soul. The storyline, such as it is, revolves around the efforts to unify these disparate pieces of Hildegard.

There are intimations of sexual abuse in the pasts of both cloistered women (a fifth actress Mia Pak plays the repressed parts of Juta) but their stories are left intentionally fuzzy. McLean is far more interested in creating a sonic narrative.

Her score is played by a four-member band (including someone who strums a qanun) that sits just slightly offstage playing Philip Glass-style rhythms. But the driving force of McLean's soundscape comes directly from the women themselves.

They moan, they click their tongues, they clap their hands, they beat their thighs and sometimes they sing in gorgeous harmony. Through the magic of modern technology, most of their sounds are recorded and immediately played back, creating an eerie electronic echo.

The effect can be arresting. It sometimes reminded me of the Gregorian chants that I adore. But there’s also a-look-at-how-clever-I-am quality to it all that I found annoying.

I also wanted more of a story. And since most of the action takes place inside the women’s cell, it got monotonous, despite director Lee Sunday Evans’ valiant attempts to keep the actors in motion. Which is not easy to do in the intentionally constricted space set designer Kristen Robinson has created for them.

Maybe the problem is that I’m just not a chamber musical gal. I’m chagrined to admit that I was bored by Dave Malloy’s Octet, and that a capella musica charmed just about everyone else I know. Even more sacrilegious, I was somewhat ho-hum about The Band’s Visit, a universal favorite (even my persnickety husband K liked it) which, of course, ended up winning a Tony.

But years of theatergoing have taught me that you gotta know yourself and make peace with your preferences. I love propulsive narratives and I’m a sucker for big spectacles onstage. Now I have appreciated other kinds of musicals. But the intimate pleasures of this chamber musical proved to be too claustrophobic for me.

Labels: In the Green