Why "tick, tick...boom" Knocked Me Over 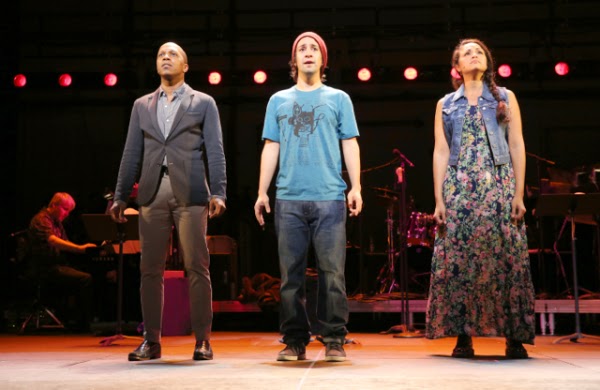 If you want to see a show that will lift your spirits, then drop what you’re doing right now and get a ticket to tick, tick…boom!, which is playing in the New York City Center Encores! Off Center series only through tomorrow, which is why I’m taking the unusual step of posting a day early.

The Off Center series, which launched last summer, reprises musicals that were originally done off-Broadway. This production is the best thing I’ve seen at any Encores since I saw the first performance of Chicago that eventually lead to what is now a nearly 18-year run of that Bob Fosse/Kander & Ebb classic.

But this revival of Rent creator Jonathan Larson’s lesser-known work will also break your heart. As every theater lover knows, Larson died from a tear in his aorta on the morning of the first preview of Rent, which would go on to the Tony for Best Musical, a Pulitzer Prize and its own 12-year run. He was just 35 and seeing tick, tick…boom made me mourn all over again the loss of his brilliance and the shows that might have been.

Tick, tick boom is a straight-up autobiographical piece that Larson originally wrote as a one-man cabaret act that he first performed at the Village Gate. He’s the main character and the story recounts his struggle to continue working as a composer as he approaches his 30th birthday.

It's not easy as he watches friends exchange their artistic dreams for the security of steady paychecks and apartments where the bathtub is in the bathroom and not the kitchen. The sound effects of the title are the cautionary vibrations of the time bomb hanging over his head.
Larson stayed the course and Rent, which also borrows liberally from his experiences as a struggling artist, was the result. Five years after his death in 1996, playwright David Auburn, himself a Pulitzer winner for Proof, converted tick, tick…boom into a three-person show that starred Raul Esparza, Jerry Dixon and Amy Spanger.

I didn’t see that production and I don’t know how much Auburn added but the script is rife with lines about how little time there is any life. Knowing the tragic brevity of Larson’s makes them all the more poignant.
Which isn’t to say that this show is a downer. Many of the incidents Larson shares—the "are-you-OK" calls from his parents, the encounters with obnoxious customers at the diner where he earns his rent money, the oops-did-he-really-say-that exchange he has during an interview for a straight job—are hilarious.

Meanwhile, the songs—from funny numbers like "Sugar," a paean to junk food, and "Sunday," a parody of the Stephen Sondheim song from Sunday in the Park With George; to moving ballads like "Come to Your Senses" and "Why"—are delightful.

Larson wanted to marry the rock music he loved in his youth to the show music, particularly that by Sondheim, that he revered. Rent was the consummation of that but he was already well on his way with tick, tick..boom, and no one has yet to do it better.

The Encores! folks have had the great good sense to cast Lin-Manuel Miranda to play Larson. Miranda is, of course, the composer and lyricist of In the Heights, the 2008 Tony winner for Best Musical that joyfully combined the hip-hop music he loved in his youth with the show music, particularly Larson’s, that he revered (click here to read an incredibly moving tribute he wrote to his role model).

Miranda isn’t a great singer but he is now just a year shy of the age Larson was when he died and his identification with Larson mixed with his own innate charm make his performance a shouldn't-miss-it experience.

But he’s not the only reason to see this production. Auburn’s version of the story calls for an additional male and female character and here, again, the casting couldn’t be better.

Leslie Odom, Jr., now probably best known for his TV work on “Smash” and “Person of Interest,” is excellent as Larson’s best friend who has given up his dream of being an actor for a career in marketing. He's also amusing in several smaller roles, from Larson's dad to his female agent.

Karen Olivo, the Tony winner for her portrayal of Anita in the 2009 revival of West Side Story publicly quit the business last year for a teaching gig in Wisconsin. But she's returned to play Larson’s girlfriend, a dancer drifting more into teaching and pressuring him to move out of the city.

The crowd at the Thursday night performance I attended roared its approval after every number but Olivo’s plaintive rendition of “Come to Your Senses” almost brought the house down (click here to read an interview with her).

The production, directed by Oliver Butler, is simply but effectively staged.  The usual Encores! orchestra has been replaced by a tight five-man band. And most of the action takes place on a stage bare, except for lights, cables and other backstage paraphernalia, as though invoking Larson’s spirit and those of every other theater artist, successful or not, who has stuck it out against the odds.
It seems unlikely that this show will transfer.  As much as I loved it, tick, tick...boom is probably too slight and dated to draw a mainstream audience.  And if it were somehow to get a longer run, it’s unlikely it would be with this cast.  So, as I said, you should do whatever you can to get a ticket now.