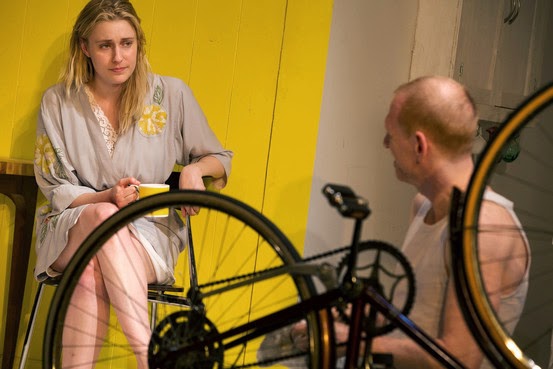 Sign me up for the Greta Gerwig fan club. A few months ago, I saw—and very much liked—this appealing young actress in “Frances Ha,” the indie movie she and her boyfriend director Noah Baumbach made about a young woman stumbling through the transition between college and adulthood. But I wasn’t sure what to expect when I read that Gerwig, a theater novice, would be starring in The Village Bike, the provocative play by British playwright Penelope Skinner that opened in an MCC Theater production at the Lucille Lortel Theatre last week.

Now, having seen the play, I can say that Gerwig has made one of the most assured stage debuts I’ve ever seen. That may be, in part, because the role fits the boho personae she's cultivated so well (click here to read an interview with the actress). Gerwig plays Becky, a young pregnant wife whose recent move to a small English village has made her restless and whose shifting hormone levels have made her horny.
Unfortunately for Becky, her husband John is the kind of emo guy who won’t use plastic bags because they damage the environment and won’t sleep with his pregnant wife because he fears that his love thrusts may hurt their unborn child. So she decides to buy a second-hand bike, with the idea that riding it will be a way to sublimate her sexual energy.

But the play's title is a sneaky double entendre because the phrase “village bike” is also slang for a woman everyone in town has “ridden.” And as it happens, the bike's owner is the village rake Oliver, whose wife is conveniently out of town for the summer, allowing Becky and Oliver to fall into what they agree will be a no-strings fling in which they indulge one another's sexual fantasies and abstain from any emotional involvement.

It's a perfect set-up for a sex farce. But by the second act, both the fantasies and the emotions are spinning seriously out of control.
Skinner, whose 2008 breakthrough play Fucked was about a woman who gives lap dances for a living, likes to explore the ambivalent attitudes that society—and women themselves—continues to have about female sexual behavior even though five decades have passed since the Pill was supposed to free women to do what they please without worrying about the consequences (click here to read about the writer).

The roles Skinner writes require an actress who isn't afraid to expose ugly emotions. Gerwig’s guilelessness makes her the right gal for the job. From the panicky look in her eye to the almost unnoticeable tremor in her hands, Gerwig radiates the growing desperation Becky experiences as she realizes that she can’t reconcile the woman she imagines herself to be with the one she actually is.
The actress gets marvelous support from Jason Butler Harner as the beta-male John, Scott Shepherd who plays Oliver with the kind of bad-boy insouciance that so often spells trouble for women (click here to see a scene between him and her) and the ubiquitous Sam Gold, who directs with a sensitive touch (is it even possible to do a play about contemporary life these days without Gold at the helm?)

But Gold doesn’t get everything right.  A set change takes an army of stagehands to pull off during intermission and still requires the audience to do too much work to keep everything clear.  Gerwig, however, is so totally lucid that I really hope it’s not the last time we see her on a stage.