This "Macbeth" is Brawny But It Lacks Magic 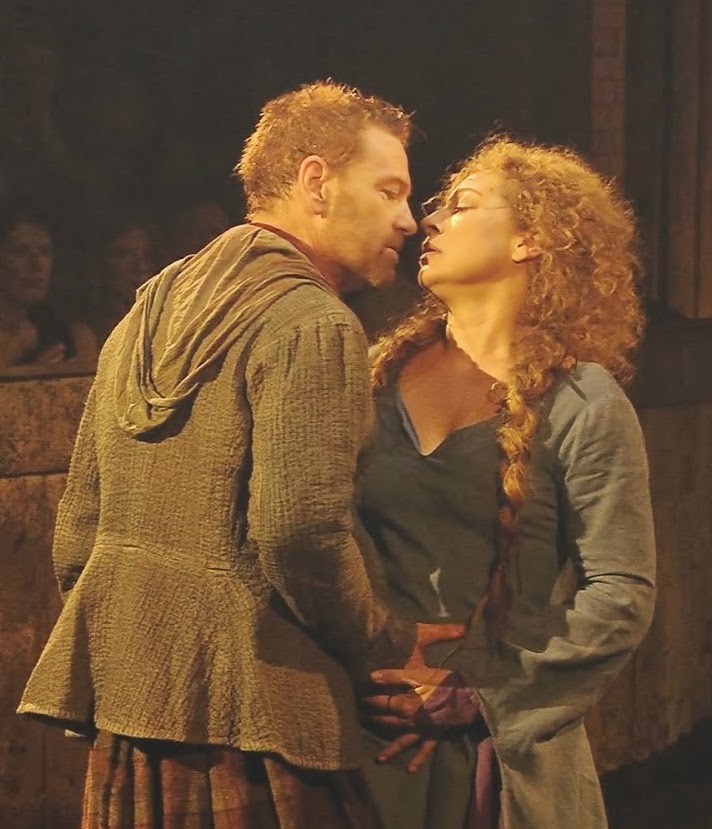 You might think that I’d be ready to give Shakespeare a rest after the recent Bard-heavy season on Broadway. But I bought tickets to Kenneth Branagh’s acclaimed production of Macbeth the very morning they went on sale. For this production marks Branagh’s New York stage debut and his first stage production of Shakespeare in nearly a decade.

Branagh made his theatrical bones in 1984 when he was just 24 with the landmark Royal Shakespeare Company production of Henry V that he also turned into a terrific movie. Later, as the actor-manager of the Renaissance Theatre Company, he took on the iconic roles of Romeo, Hamlet, Coriolanus and Benedick in Much Ado About Nothing, causing some observers to declare him the thespian heir to Laurence Olivier.
But the company disbanded in 1992 and Branagh drifted into other ventures, including playing the title character in the film noir TV crime series “Wallander,” directing the superhero film “Thor” and making a cameo appearance in one of the “Harry Potter” movies.

Then, a couple of years ago, he got a joint commission from the Manchester International Festival and the Park Avenue Armory to do a production of Macbeth, with himself in the title role.

Branagh recruited Rob Ashford to be his co-director and persuaded the dynamic British actress Alex Kingston to play his Lady Macbeth. The production had a triumphant world premiere at the festival last summer and is now playing at the Armory through June 22.

Although the stage area fills up only a small portion of the Armory’s mammoth drill hall, the entire place has been enlisted for this production. Theatergoers are divided into “clans” named after the warring factions in the play and sent to wait in one of the Armory’s beautiful regiment rooms. Each group gets it own program with a clan-specific tartan cover—my theatergoing buddy Bill and I were in the Angus clan.

A gong sounds 20 minute before show time and each clan is then escorted into the main hall, which has been transformed into the spooky desolate bog of medieval Scotland. The audience is seated on padded bleachers on both sides of a long dirt-filled trench that is buttressed on one end by a Stonehenge-like pagan structure and on the other by a religious alter underneath a huge Christian cross (click here to read more about the making of the set).
It took about 40 minutes for everyone to get ushered in and seated but once the play gets going, the action whooshes by in a fast-paced two hours with no intermission. This is a high-testosterone production with lots of tall, brawny soldiers (there are over two dozen people in the cast), big muscular sword fights, rainstorms that turn the dirt to mud and lusty encounters between the Macbeths.

And there are lots of spook-house thrills. Murders that usually occur offstage are gruesomely re-enacted right in front of the audience. The witches who foretell Macbeth's fate, blonde-haired vampire sylphs, seem to hover in the air.

It’s all dazzling and spine-tingly thrilling to watch but less so to hear. The acoustics are difficult in a hall of that size and the accents made it even more of a challenge to understand all of what the actors are saying. People with shaky memories of the play might also have a difficult time sorting out the characters and their alliances.
The quieter moments play best. Scarlett Strallen is a poignant Lady Macduff and Richard Coyle commands attention as the grieving husband who avenges her cruel death. I actually found myself sorry that the evening hadn’t just focused on their story.

Now, that's not to say that Branagh and Kingston, best known in this country for her work on the old TV medical drama “ER,” were bad. He is appropriately courageous and conflicted as any Macbeth should be, although he speaks more quickly than most. She is strong-willed, sexy and, like a good Lady Macbeth, convincingly devoted to her husband’s wicked ambitions (click here to read an interview with her).
But, despite the production’s stated intention to focus on the love between the deadly couple (click here to read more about that) neither brings new colors to the roles in the way that Patrick Stewart and Kate Fleetwood did in the 2007 production that imagined Macbeth as an older husband trying to prove his virility to a childless—and ruthless—younger trophy wife (click here to see clips of that production and some other legendary ones).

There is, as Bill said on our walk to dinner after the show, no clearly delineated yin-yang dynamic. Which means there's no clear explanation for why the Macbeths do what they do. In the end, the clashing sounds and passionate fury of this Macbeth may be impressive but I wanted it all to signify something more.