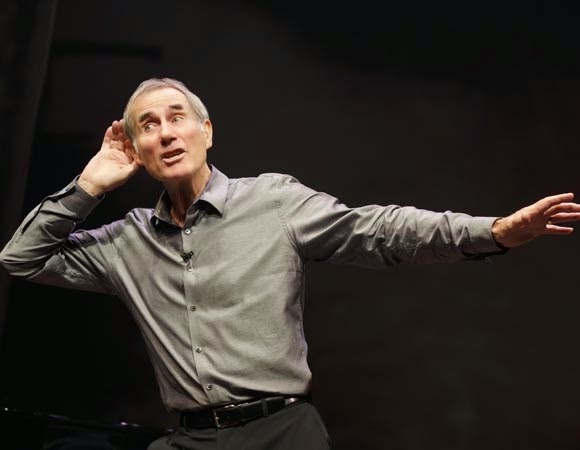 If you should ever be invited to a dinner party with the actor Jim Dale, you should go. For Dale has all the qualities anyone would want in a table companion: he's got great stories to tell, a self-deprecating wit with which to tell them and an abiding desire to please his audience. As it happens, those are the same qualities that mark his one-man show Just Jim Dale, which is scheduled to play at the Roundabout Theatre Company’s Lara Pels Theatre through Aug. 10, just five days before Dale’s 79th birthday.

Dale, who won the Tony for Barnum back in 1980 but is probably now best known for voicing over 100 characters on the “Harry Potter” audiobooks, got his start in show business by playing in British music halls when he was still in his teens and going by his birth name Jim Smith.
Just Jim Dale dances through the rest of his career, with stops along the way for his days in a ‘50s-era boy band, his years as part of London’s National Theatre with Laurence Olivier, his U.S. breakthroughs in the commedia dell’arte comedy Scapino and Barnum, his Oscar win for writing the title song for the movie “Georgy Girl” and his later dramatic turns in Joe Egg and The Road to Mecca (click here for my review of that one).

The theatrical polymath Richard Maltby, Jr. directs the show and the patter is broken up with songs (the jolly pianist Mark York also serves as a silent comic foil), a couple of soft shoe routines, some artful pratfalls and video projections that show the actor in his younger days.
But this isn’t one of those warts-and-all affairs like Elaine Stritch’s At Liberty. Dale focuses only on the upbeat times and professes to have liked everyone he’s ever worked with. Still, he’s irrepressibly charming and so is this slight 90-minute show, which has gotten generally welcoming reviews (click here to read a few). And yet I can’t help wishing I’d just had dinner with Dale instead.