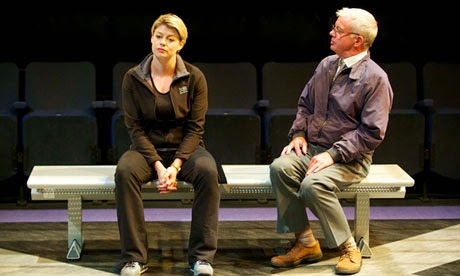 Intermission had arrived for Arrivals & Departures, the latest Alan Ayckbourn play (reportedly his 77th!) that is running along with two of the master playwright’s earlier works in the annual Brits off Broadway festival at the 59E59 Theaters through June 29, and my theatergoing buddy Bill was feeling restless. Where, he wanted to know, was the gimmick?

Ayckbourn likes to play with time and space and he is famous for such “gimmicks” as having characters enact separate storylines on the same set or dividing a single story into parts that play out in separate theaters.

But the first act of Arrivals & Departures seemed pretty straightforward: a security team has assembled at a train station to capture a terrorist reported to be on an incoming train.
Since this is an Ayckbourn play, the agents are a Monty Pythonesque crew and there are a lot of laughs as the group’s supercilious leader conducts dress rehearsals for the agents who are halfheartedly pretending to be regular travelers.

Their amusing antics are interrupted by two latecomers. One is Barry, a genial civilian who had a previous encounter with the terrorist and so has been brought in to help identify the man once he’s in custody. The other is Ez, a surly female agent who has been assigned to protect Barry.
As Ez and Barry wait for the mission to begin, there are flashbacks that give Ez’s backstory. In deference to the play’s title, they nearly all take place in train stations and airline terminals. But they didn’t seem distinctive enough to qualify as an Ayckbourn-worthy gimmick. And they didn’t seem all that interesting in their own right either.

Several people left at intermission. Those of us who stayed were rewarded when the gimmick was revealed at the start of the second act.

[TIME OUT: Now, as regular readers know, I hate spoilers and I really try to avoid spelling out plots in these posts or otherwise ruining any surprises but I haven’t figured out a way to talk about this show without giving away its conceit. So stop reading now if you don’t want to know it.]
What happens in the second act is a repeat of the first, only this time the flashbacks provide Barry’s backstory. I found his tale to be somewhat more affecting than Ez’s, probably because Kim Wall gives such a textured performance as the kind of little guy who's eager to please but well aware that he seldom does. Yet I still found myself restless at the thought of having to go through all the scenes again.

There is finally a denouement to the terrorist mission but that storyline is just a red herring. What Ayckbourn, who also directed the production, really has on his mind is a cerebration on the different ways in which average people deal with the disappointments that life dishes out.
Whether you’re disappointed or not by this show, may depend on the deepness of your fondness for Ayckbourn. Bill and I ran into a mutual friend who’s a huge fan and he was delighted even at the intermission break. The New York Times critic Ben Brantley liked it too (click here to read his review.)  Me?  I think I’ll wait for the next gimmick.