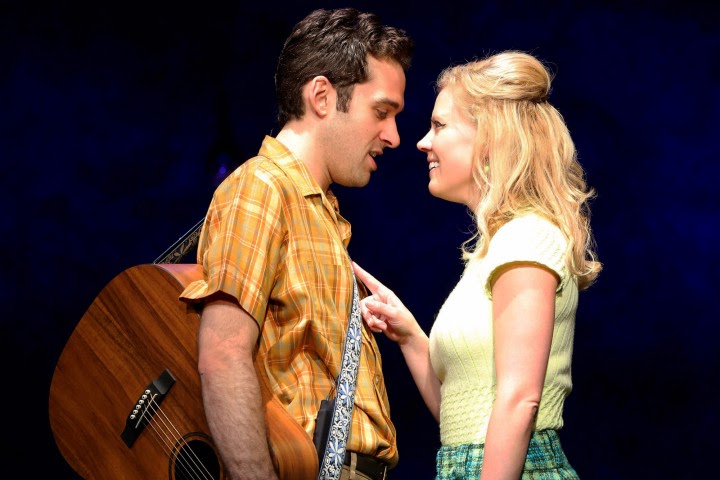 Whimsy is not usually my thing. But, what can I say, I was charmed by Fly By Night, the quirky new musical that is playing at Playwrights Horizons through Sunday.
The show was originally created by three Yale Drama School students for the annual Yale Summer Cabaret and its callow earnestness is still apparent as Fly By Night (a less generic title would be nice) unspools a meditation on the cosmic meaning of life. But it also offers a catchy score, an original, if offbeat, story, sly wit and all-around terrific performances.
Kim Rosenstock, Michael Mitnick and Will Connolly, who worked collaboratively on the book, lyrics and music (click here to read about how they did it), were clearly attentive students at Yale because their show borrows smartly from the canon of much beloved works.
Like Merrily We Roll Along, it centers around a trio of young people and has a fractured narrative, which in this case, moves back and forth over a year’s time. Like The Fantasticks, it has an engaging narrator (a droll Henry Stram) who guides the audience through the tale. And like Craig Lucas’ Prelude to a Kiss, it incorporates supernatural elements, including a mysterious soothsayer (also Stram).
But best of all, like Rodgers & Hammerstein or Kander & Ebb, its songwriters have the good sense to repeat their melodies (here, a genial Jonathan Larson-style mashup of pop-rock and show tunes) until the songs wriggle their way into earworms (the woman next to me started humming some of the tunes during the intermission break).
Fly By Night’s central character is Harold McClam, a young would-be musician who has a monotonous day job in a sandwich shop. His mother has recently died, he’s unable to cope with his grieving father and afraid he might grow up to be his grouchy boss Crabble, who hasn’t had a happy day in 20 years. Then Harold, played with his usual appealing nerdiness by Adam Chanler-Berat, falls in love. Twice.
The first time is with Daphne, an ambitious young actress who yearns to be a Broadway star (a perky Patti Murin). The second is with Miriam, an unassuming waitress who is obsessed with celestial stars (a dreamy Allison Case) and who also, unbeknownst to Harold, happens to be Daphne’s sister (click here to read an interview with the three leads).
Everything—Daphne’s big acting break, Mr. McClam’s grief, Crabble’s unhappiness, the romantic triangle—comes to a head on Nov. 5, 1965, the night of the great blackout that left some 30 million people in the northeast without electricity for up to 13 hours.
The arrival of those dark, but surprisingly liberating, hours sets off a chain reaction of epiphanies, all deftly woven together by director Carolyn Cantor, although I wish she had persuaded the writers to tell their tale in 90 or 100 minutes instead of its bloated 2 hours and 20 minutes.
Still, by the end of the second act, people in the row behind me were sobbing, including the frat-boy type who had been guffawing knowingly at all the relationship jokes.

But that’s the kind of ingratiating show this is, one that can appeal to recent college grads, delighted to see people like themselves on a stage; show queens, thrilled to welcome promising new voices into the musical theater and even whimsy phobes like me.