A Few Thoughts on "Much Ado About Nothing" 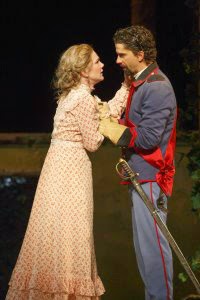 The main lovers in Shakespeare’s Much Ado About Nothing are supposed to be Hero, the sweet young daughter of an Italian aristocrat; and Claudio, the gallant nobleman who falls for her. But almost from the start, audiences— and actors—have preferred the characters of Hero’s cousin Beatrice and Claudio’s pal Benedick, the bickering twosome who ostentatiously disavow love (particularly for one another) exchange flamboyant gibes and are just a helluva lot more fun.

So the trick for companies putting on this comedy is to find evenly-matched actors who are witty and sexy enough to make both their characters—and the audience—fall in love with them. Past pairings have included Blythe Danner and Kevin Kline, Emma Thompson and Kenneth Branagh and Kathleen Widdoes and Sam Waterston in the 1973 production for the Public Theater that many New York theater lovers swear to be the best of the past half century.

Now, the Public has taken up the challenge again with the casting of Lily Rabe and Hamish Linklater in the current production directed by Jack O’Brien and running through this weekend at The Delacorte Theater in Central Park. The tickets are, as usual, free. The chance to see Shakespeare outdoors on a summer evening is, as always, wonderful.
The choice of Rabe and Linklater for Beatrice and Benedick seems destined. Both actors are from theatrical families and each has become a stalwart of these summer-in-the-park productions. Rabe was so committed to playing Beatrice that she gave up a part in the latest installment of the blockbuster “Hunger Games” movie franchise because the filming conflicted with the schedule for Much Ado (click here to read an interview with her).

The daughter of the late actress Jill Clayburgh and the playwright David Rabe, the husky-voiced Rabe had her breakout four years ago as a perfect Portia in The Merchant of Venice, alongside her mom’s old beau Al Pacino’s Shylock.  Now she uses her innate intelligence to play Beatrice as the smart girl who manages to be cool without being mean.

Her Beatrice’s hesitancy about love is self-protective: she wants to make sure that the guy she gives her heart to is smart enough to know that it will be accompanied by her sharp mind.

Linklater made his name on TV sitcoms like “The New Adventures of Old Christine” but his mother is the celebrated acting coach Kristin Linklater,  who also co-founded the Shakespeare & Company acting troupe, and he started appearing in her Shakespeare productions when he was still in grade school (click here to read an interview with him).

His Benedick is also unwilling to be made a fool for love and masks his feelings for Beatrice in pretend disdain until their friends connive to get them together by telling each that the other has already professed affection. More easily wooed, he turns almost giddy at the news, which puts a different spin on the role:  the guy is the greater romantic.

This is the third time in the past four years that Rabe and Linklater, now reported to be a real-life couple, have performed together on a New York stage and there’s a familiarity between them that gives an intimate spark to the bantering between Beatrice and Benedick.

When Linklater seemed to bungle a line at the performance my husband K and I saw, Rabe swooped in to help cover the mistake and the looks of amusement and affection that passed between them was the kind of serendipitous moment that theatergoers like me cherish.

The supporting cast was, alas, less successful. Jack Cutmore-Scott and Ismenia Mendes are pretty but bland as Claudio and Hero and John Glover, a notorious scene-stealer, is unusually subdued as Hero’s father.

Meanwhile, Pedro Pascal, one of the multitude of stars on HBO’s “Game of Thrones,” doesn’t seem to know quite what to do with Don John, the Iago-like villain who tries to wreck the romance between Claudio and Hero by falsely accusing her of being unfaithful. And John Pankow isn't funny enough as Dogberry, the clownish constable who saves the day.
The one exception is Brian Stokes Mitchell, who plays Don Pedro, Claudio and Benedick’s military commander. Judging from the Playbill, this is Mitchell’s professional Shakespeare debut (even though he was terrific in the 1991 revival of Cole Porter's Bard-inspired musical Kiss Me, Kate) but Mitchell's sonorous baritone and commanding stage presence make me hope that this won’t be his last venture in the canon.

And since I’m in a wish-fulfillment mood, I’ll also hope that producers will find new chances for Rabe and Linklater to put their Hepburn & Tracy-like chemistry to work. Maybe something like The Front Page.

Labels: Much Ado About Nothing