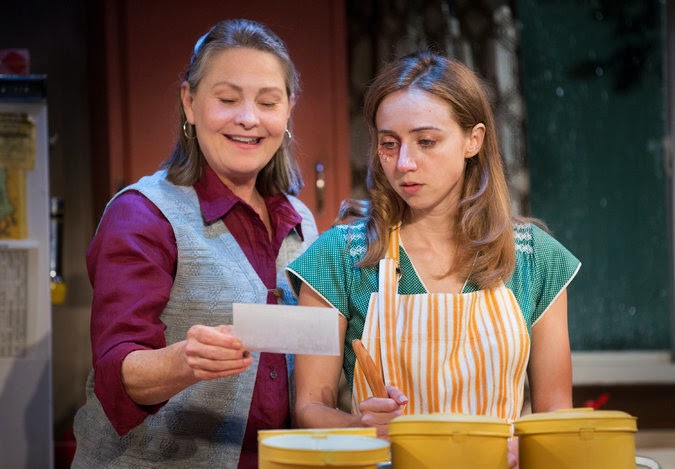 Playwright Sarah Treem is only 33 years-old, which means she’s much too young to have lived through the pre-Roe v. Wade days that provide the backdrop for her latest play When We Were Young and Unafraid, which is running at Manhattan Theatre Club through Aug. 10.

But Treem, who broke onto the theater scene in 2007 with a play called Feminine Ending, has an abiding interest in the ways by which women define themselves in this society (click here to read an interview about her commitment to the subject) and so she has set this new work amidst the ferment of the women’s lib era when old shames were being shucked off and bold challenges taken up.
When We Were Young and Unafraid takes place at a seemingly placid bed and breakfast on an island off the coast of Seattle that’s run by an earth-mother named Agnes and her teenage daughter Penny. But it’s quickly revealed that their home also doubles as an underground railroad station for women fleeing abusive husbands.

The latest arrival is Mary Anne, who bears both the tell-tale black eye of a particularly bruising beating and conventional beliefs about the way women should behave. Also on hand are Hannah, a radical lesbian ostensibly searching for a nearby women’s commune, and Paul, a male guest at the B&B.

The setup is a bit overly schematic—Mary Anne teaches Penny how to play dumb so that she can get the quarterback at school to invite her to the senior prom, Hannah rants about how women are better off without men—but the underlying issue of how to be feminine and feminist is one that many young women continue to struggle with (while recent polls show that most Americans now believe in gender equality, less than a quarter of the women under-35 surveyed were willing to call themselves feminists).

But the real problem arises as Treem tries to juggle too many options and serves them up with too little subtlety. Her characters too often act, well, out of character, doing what the plot needs them to do instead of what the people they’re supposed to be would do.  Penny, in particular, hops all over the place, Gloria Steinem at the barricades one minute, a do- anything-to-please-your-man Marabel Morgan in Saran wrap the next.
Still, Pam MacKinnon has assembled a crackerjack cast and directed them masterfully. Cherry Jones, fresh from her acclaimed turn as Amanda in last season's revival of The Glass Menagerie, convincingly grounds Agnes in the solidity on which others lean but, as happens with so many strong women, wobbles when it’s called upon to support her own needs.

And Zoe Kazan is the best I’ve ever seen her, nailing the desperate, almost flamboyant, neediness that causes women like Mary Anne to make such disastrous choices (click here to read an interview with her).
Some critics (most of them male) have dismissed When We Young and Unafraid, calling it inconsequential, outdated, unbelievable. But those are often the kinds of words that get thrown at women when they focus on women’s stories.  This may be an imperfect play but I applaud Treem for having had the balls to write it.

Labels: When We Were Young and Unafraid