How "Sex With Strangers" Turned Me On 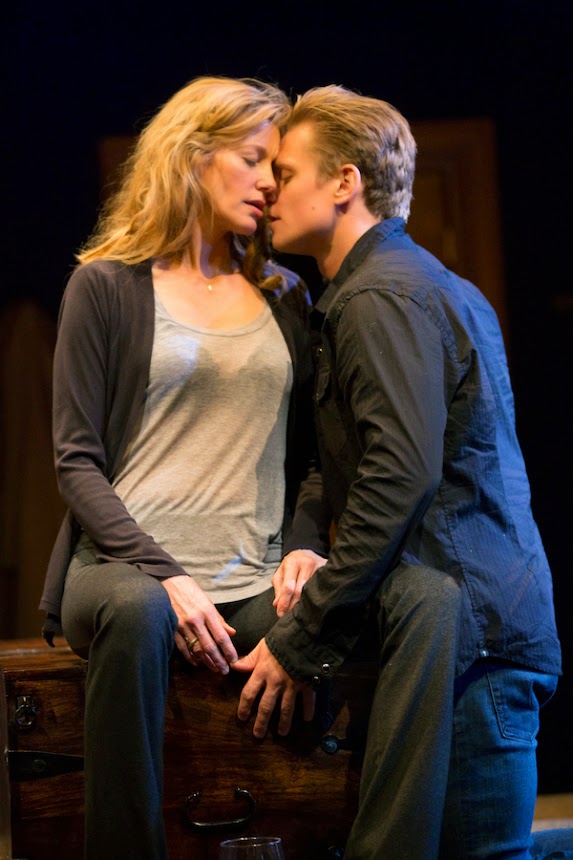 We all say we want to be loved for just being ourselves but playwright Laura Eason knows that romantic relationships usually start off with each person pretending to be someone different than they really are. And that knowingness is the charm of her play Sex With Strangers, which opened this week at Second Stage Theatre.

Its would-be lovers are Olivia, a late-thirtysomething writer whose debut novel was beautifully written but so totally overlooked that she has retreated into teaching and just writing for herself; and Ethan, 10 years younger and the author of a slick bestseller about how to pick up (and discard) women that began as a blog and now has him rolling in dough.
They meet cute after a snowstorm keeps other guests away and they end up the only residents at a writers’ retreat. In typical romcom fashion, they’re turned off by one another at first and then, they’re turned on.  Really turned on.
Their sex scenes, as directed by David Schwimmer, go on a bit longer than they need to but they are hot and erotic. Schwimmer may still be most famous for his role on the sitcom “Friends” but, like Eason, he’s also a longtime member of Chicago’s Lookingglass Theatre Company and he knows his way around a stage.
He also knows how to squeeze the juice from the text, which, in this case, is succulent and bristling with such questions as whether the Internet will change literature and whether love can change a person (click here to read about the development of the show).
After the lovemaking come the real intimacies. Ethan is eager to be seen as a more sensitive guy than his book would suggest. He’s read, and says he’s a fan of, Olivia’s novel and he also wants to be taken seriously as a writer. Olivia yearns for the wider readership that Ethan has enjoyed and is flattered by the attention of such a young hottie even as she’s suspicious of his licentious past.
And then come the questions. Is he really into her or just an asshole who’s trying to get her to lend the prestige of her literary background to his new digital publishing venture?  Does she really want to be with him or is she actually lusting after the contacts he has in the publishing world who can help advance her career? Does it matter why they’re together? Can either put aside the fears and jealousies that come easily for the vulnerability that is harder won?
To care about the answers, you need to care about the characters. And here’s where Sex With Strangers really scores, for Schwimmer and Eason have smartly cast Anna Gunn, best known as Walter White’s wife on the hit cable series “Breaking Bad;” and Billy Magnussen, who broke through last season as the hilariously dim-witted but chiseled-bodied Spike in Vanya and Sonia and Masha and Spike.
Gunn struck me as straining during the first act of the performance that my theatergoing buddy Bill and I saw. I could sense the gears working as she tried to convey Olivia’s simultaneous wariness and neediness. But she burrows into the role during the second act when Olivia is forced to make tough decisions about the work that defines her and the man she’s trying to figure out (click here to read an interview with the actress).

Magnussen lends his own boundless charisma to Ethan but he also layers believable gravitas under the character’s fratboy bonhomie. And Magnussen is so natural in the role he almost seems not to be acting.  He radiates the sense that anything could happen which makes it extra thrilling to watch his performance.  I’d love to see his Stanley Kowalski.

But in the meantime, you ought to see Sex With Strangers, which has just been extended to Aug. 31.

I loved this play. Laura Eason's writing is sharp and funny. The title is attention-grabbing but the play is about so much more. It's really about literature and blogging and the state of publishing today and what, exactly, does it mean to publish a book. I found it all really thoughtful and fascinating and I enjoyed it much more than I thought I would from the title!