Hot and Cold on This Year's "Summer Shorts" 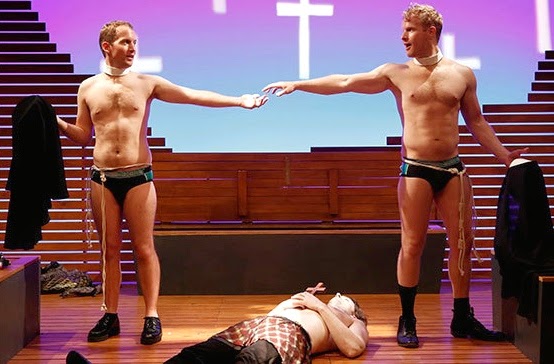 Summer Shorts, the festival of short plays that appears every August at the 59E59 Theaters, is always a grab bag. Its contributors are a motley crew of known and lesser-known playwrights. They can—and do—write about anything and in any form. Which means the shows, divided into two evenings of three plays each, include small comedies, tiny tragedies, solo works and the occasional mini musical. The quality varies too, from the very good to the nearly unbearable.

Both the highs and lows of the festival were on display when my friend Jessie and I saw the three plays that make up this year’s Series B, which consists of works by Albert Innaurato, Neil LaBute and Daniel Reitz, all performed on a simple but elegant and highly versatile set designed by Rebecca Lord-Surratt.
The evening opened with Napoleon in Exile, a two-hander by Reitz, who, according to his bio, is well-known on the regional and play development circuit although he’s new to me. But after seeing this affecting piece about a mother and her grown son who has Asperger’s syndrome, I’ll be on the look out for more of his work.

Under the excellent direction of Paul Schnee, Henny Russell is wrenching as a mother who realizes perhaps too late that her efforts to protect her son may have put him at greater risk. But the piece rises or falls on the performance of the son Corey and Will Dagger is outstanding, capturing the physical tics and emotional inhibitions of the syndrome without surrendering to stereotype.

Dagger makes Corey funny and smart but also fearfully aware of how unable he is to function in the world on his own. My heart broke for both mother and child and for the real life families in similar situations.
LaBute is a Summer Shorts regular and his latest offering The Mulberry Bush shows how well he has mastered the form. It starts with two apparent strangers sitting on neighboring park benches and striking up a conversation. The talk turns more serious, secrets are revealed, tensions rise. But the most difficult role is left for the audience, which is challenged to find empathy for someone easy to detest.

Once again, the acting is superb, particularly from Victor Slezak, who, under the sensitive direction of Maria Mileaf, slowly peels back the fragile layers of a man at war with himself and desperately afraid of losing.

But most of the advanced attention for this collection of plays has gone to Innaurato, the onetime theatrical wunderkind who wrote such highly acclaimed plays as Gemini and The Transfiguration of Benno Blimpie but hasn’t had a new work produced in New York since 1989 (click here to read a recent New York Times piece about him). Alas, his Shorts offering Doubtless was a real disappointment.
A smug farce whose characters included lesbian nuns, priapic priests and a vampire Jesus, it takes hits at the Catholic Church, the political right and people who have been more successful in the theater than its author, including his former Yale Drama School classmates Meryl Streep, Sigourney Weaver and Christopher Durang. Even the title is an intentional slam at Doubt, John Patrick Shanley’s Pulitzer-Prize winner about sex abuse in the Church.

The bitterness might be tolerable if the production were truly funny but director Jack Hofsiss seems undone by that challenge. Three women sitting near me (ex-nuns?  members of the Innaurato family?) guffawed loudly at each put down but the whole thing struck me as silly and sophomoric and like several other people in the audience, I kept sneaking peeks at my watch.
Doubtless runs twice as long as each of its companions and isn’t nearly half as satisfying as either. But, as my husband K said when I got home, “two out of three ain’t bad.” That's particularly so when they’ve been plucked from a grab bag.