Youth, Love and Sex at This Year's Fringe 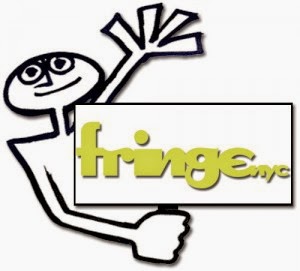 Every spring I tell myself I should see the end-of-school productions at Juilliard or New York University’s Tisch School of the Arts so that I can get a peek at the newest crop of talented hopefuls ready to storm the theater world.  Inevitably, other things come up and I end up not going. But a visit to this year’s New York International Fringe Festival has given me the chance to make up for that.

The Fringe is always filled with young up-and-comers hoping for their big break. Yet I had almost skipped it too because, as always, it's so difficult choosing what to see when 200 shows are running at 18 different venues from Aug. 8 to Aug 24. But my undaunted theatergoing buddy Bill valiantly sorted through the offerings and came up with a trio of shows for us to see in one day of marathon theatergoing.

Two of the three—Vestments of the Gods and The Picture (of Dorian Gray)—featured fresh-faced casts and left me admiring the intensity of their young actors' energy and unbridled commitment to their craft, even if I wasn’t swept away by the shows themselves.

Vestments of the Gods, a musical that lists Lin-Manuel Miranda as a producer, uses Sophocles’ Antigone as a jumping off point. Here the principled young woman daring to go up against the establishment is Annie, a sixth grader at Thebes Street Elementary School, and the cause she’s fighting for is an end to bullying, particularly of the effeminate boy who is her best friend.

The book writer Owen Panettieri works hard to create modern-day cognates for the characters in the original story—Ismene, Antigone’s more compliant sister, becomes Ms. Mene, the school teacher who looks the other way when the bullying occurs; Tiresias, the soothsayer in the Greek version becomes, a bit more improbably, Terry, the truth-telling janitor at the school.

But Panettieri isn’t able to add anything to the tale beyond the obvious message that bullying is bad and so his show carries the whiff of an old-style public service announcement. A program note says the music by David Carl was added late in the development process.  It’s pleasant, if undistinguished, but the lyrics, also by Panettieri, don’t say much about the characters singing them or move the plot along. 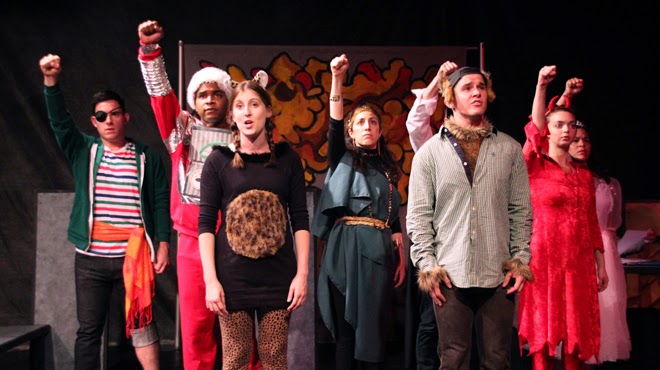 Still the cast is game. Erica Diaz does a fine job as the noble Annie, stage vet Jennifer Cody seems to be having a good time as the school’s narrow-minded PTA president and although the eight actors who make up this show’s Greek chorus are a decade older than the grade schoolers they're playing, they are energetic and sing well.

Vestments of the Gods, which is scheduled for three more performances at Theatre 80 on St. Marks Place, is unlikely to have much of an afterlife but some of its eager young cast members may.

The odds that the five comely actors in The Picture (of Dorian Gray) may have careers seem even stronger. The three men and two women apparently all come from Juniata College, a small liberal arts school in Pennsylvania that prides itself on its science program, and they’re almost vibrating with the desire to show how much theater matters.

Their show takes a highly-stylized approach to Oscar Wilde’s classic novella about a hedonist who trades his soul for eternal youth and beauty. Neal Utterback is listed as the adapter and director and he has the actors, all dressed in androgynous jeans and white t-shirts, pass the characters around irrespective of gender. The change is signaled when an actor puts on one of the distinctive pairs of sunglasses that symbolize each role.


A narrator periodically recites Wilde's prose. The actors sometimes speak in unison. They also perform choreographed movements and sing snatches of contemporary songs chosen to underscore telling moments in the story. Bill found it all to be a bit too precious. And the story can be difficult to follow if you come to it new. But I'm a sucker for this kind of flamboyant stagecraft. 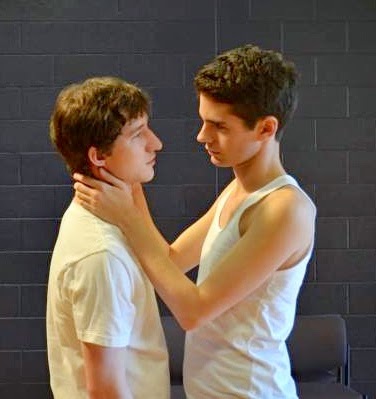 Watching these young actors, particularly the eyecatching Jamison Monella, reminded me of my own acting class days when my fellow students and I felt that we didn’t need props or costumes to make a show but just passion. You can catch a similar spirit on display at The Steve & Marie Sgouros Theatre on MacDougal Street, where The Picture (of Dorian Gray) is slated for four more performances, including one today.

And yet, contrary to the up-with-youth theme of this post, the show that both Bill and I like most was Bedroom Secrets, a two hander about middle-aged people written and directed by Thomas and Judy Heath, the husband-and-wife team whose previous play Perfectly Normel People won the festival’s Audience Award last year.
The set-up for Bedroom Secrets is simple: a therapist listens to and tries to help the sexual problems of a series of clients. The therapist is played by Ashlie Atkinson, who made a terrific debut nine years ago as the overweight title character in Neil LaBute’s Fat Pig but hasn’t done much in New York since then. I hope this production changes that because she’s a marvelously genuine and sympathetic actor.

All five of the clients—male and female—are played by Stephen Wallem, who will be familiar to TV watchers as the male nurse Thor on Edie Falco’s Showtime series “Nurse Jackie.” Wallem's stage credits seem to be mainly musicals and concerts but he does a very nice job here, moving in just a beat from character to character, aided only by a simple prop—a water bottle, a cellphone, some neck wear—to distinguish each.

The play’s underlying message is that all of us—gay or straight, single or married, young or not so young—want to be loved. That’s not exactly original but it’s sweetly told and just the kind of show that budget-minded regional theaters might appreciate. But New Yorkers will have to rush to see it because there’s only one more performance scheduled and it’s tonight at the Players Theatre on MacDougal.

There are however lots of other Fringe performances to see over the next week and a half and you can check them all out here.