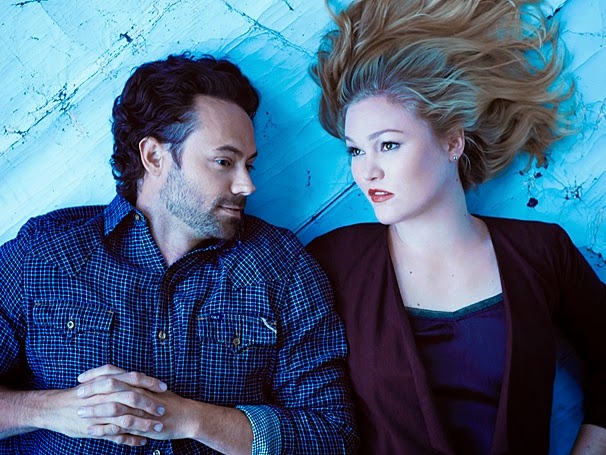 Nothing makes sense in Phoenix, the totally inept two-hander that’s playing at the Cherry Lane Theatre through Aug. 23.  Ostensibly, it’s a rom-com about two lonely souls who hooked up one night, later discover that she’s pregnant and then spend the next 85 minutes trying to figure out where to go from there.

If that scenario sounds familiar it may be because you’ve seen the 2007 Judd Apatow movie “Knocked Up,” in which Seth Rogen and Kathryn Heigel play a couple who hook up one night, later discover that she’s pregnant and then try to figure out where to go from there.

Of course, it’s absolutely OK to appropriate a familiar storyline (look at Shakespeare) but if you do, then you’ve got to bring something to it (look at Shakespeare). Unfortunately, playwright Scott Organ only brings vapid dialogue and half-realized characters.
The first scene of Phoenix is a meeting, four weeks after the couple's initial get-together, between the woman Sue and the man, whose name is listed as James in the Playbill but who is called Bruce onstage. And that mix-up is just the first sign that this production is in trouble.

Sue has summoned James/Bruce to a coffee shop to tell him three things: (1) she had a good time when they were together; (2) she doesn’t want to see him anymore and (3) she’s pregnant and plans to get rid of the baby but isn't expecting any help from him.

Really? I’m all for suspension of belief in the theater but are we actually supposed to believe that a woman would go out of her way to get in touch with a one-night stand just to tell him that she doesn’t want to have anything to do with him and is getting rid of the unintentional pregnancy that resulted from their encounter?  Really?
The absurd premise might matter less if the actors were able to convey the longing to connect that's supposed to be roiling underneath the slick surfaces of their characters—hers wary, his whimsical.  But, alas, that’s not the case either.

Neither Julia Stiles, returning to the New York stage for the first time since she appeared in the short-lived Broadway revival of David Mamet’s Oleanna (click here to read an interview with her); nor newcomer James Wirt is at all up to that task.

Although I have to say that barely seemed to matter to the legion of scantily-skirted young women in the audience who apparently see Stiles as a role model and, at the performance my theatergoing buddy Bill and I attended, clapped madly after every scene.

Even so, under the misbegotten direction of Jennifer Delia, making her off-Broadway directorial debut, the actors display little chemistry, deliver their lines woodenly and indulge in unnecessary and distracting stage business:  at one point, Stiles literally stands on her head.
But, as I said, nothing makes sense in this production. The set is dominated by a collection of suspended paintings, including glitter portraits of the two actors, that do nothing to establish where the action is taking place. The interstitial music is loud, the lighting garish.

And the costuming is equally clueless: would the no-nonsense woman that Sue is made out to be really change from her sweats into a pink and white chiffon sundress when heading out to an early-morning abortion?

I'm not the only one who was put off by the choices this show made and director Delia has written a detailed response to the earlier criticism (click here to read what she says). But it seems to me that if you've got to explain the effect your choices were supposed to make, then they didn't make them.

Part of the problem may be that from the producers on down, everyone involved in this project, with the exception of Stiles, is a theatrical first-timer. Most of them hail from the movie world and the Playbill says that a film based on Phoenix is already in pre-production.  Maybe it will fare better in that medium.

In the meantime, anyone seeking a robust onstage portrayal of what can happen when opposites attract should take a detour from Phoenix and head over to Second Stage to see Sex with Strangers.