Yet Another Listless "King Lear" 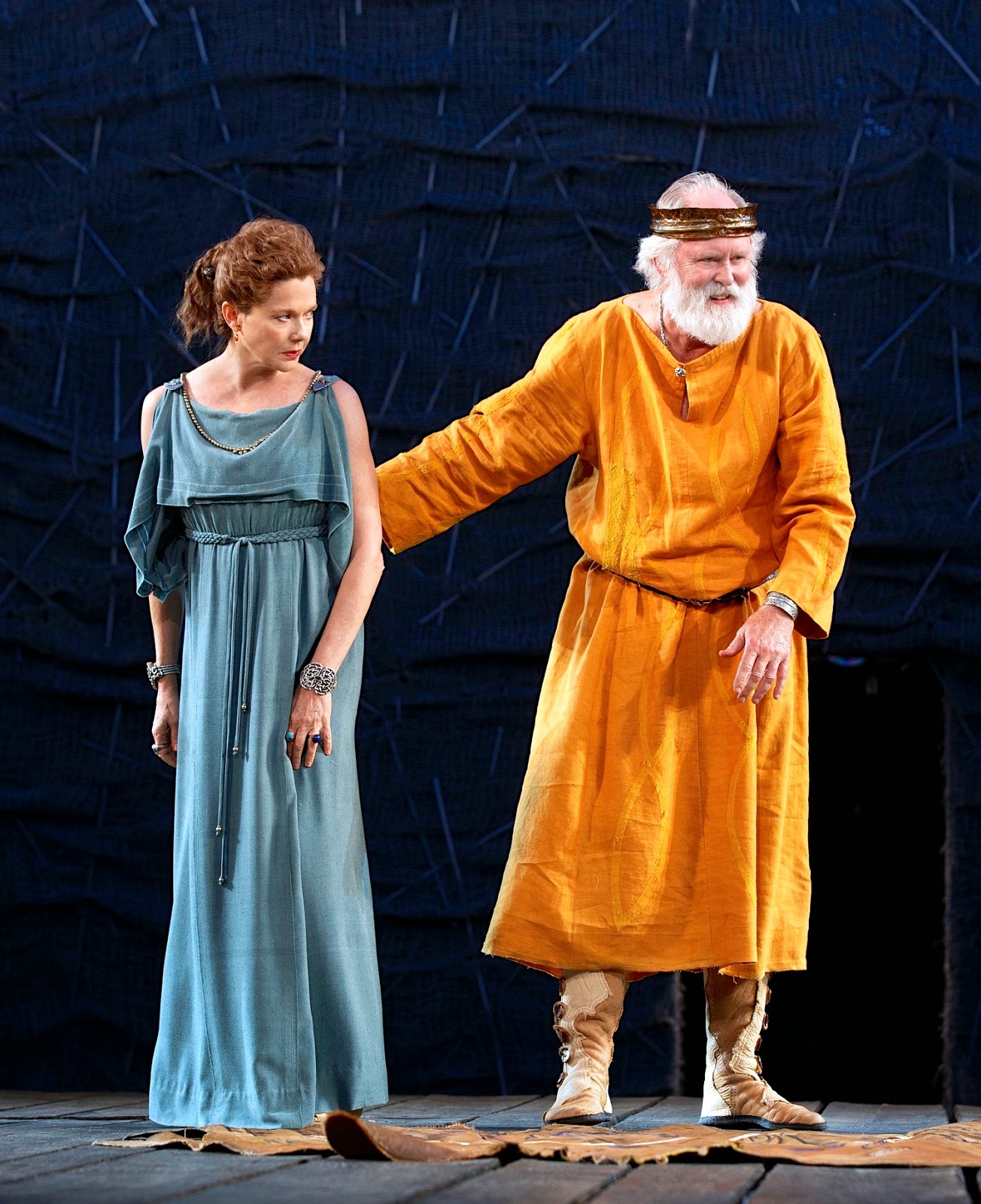 The public radio host Ira Glass set the theater blogosphere aflutter last week. The reason: after seeing an early preview of the new Shakespeare in the Park production of King Lear, he tweeted “@John Lithgow as Lear tonight: amazing. Shakespeare: not good. No stakes, not relatable. I think I’m realizing: Shakespeare sucks.”

As you can imagine, it was that last bit that pissed off theater lovers, including my friend Howard Sherman (click here to read his response). Of course, neither the play nor Shakespeare need any defending. Lear has been holding its own for some 400 years as one of the greatest works in the western canon. As George Bernard Shaw said “No man will ever write a better tragedy than Lear.”
And yet, having seen this production, I can understand some of Glass’ disillusionment. This Lear is as drab as the mud-colored costumes that the king and his courtiers wear as he divvies up his kingdom between his two eldest daughters and their husbands, disinherits the youngest for not flattering him enough and then quickly rues those decisions, all of which unleashes a chain of disasters.

Director Daniel Sullivan’s attempts to trim the text and leaven it with humor have made the action confusing, particularly for people unfamiliar with the play. Even with the cuts, it still went on for almost three and a half hours the night my theatergoing buddy Bill and I saw it.
And almost everyone onstage (the park’s usual summer salad of theater vets, Hollywood names and eager up-and-comers) seemed to be declaiming their lines instead of embodying their characters. The villain isn’t dastardly enough. The contradictorily named Fool isn’t wise enough.

Two exceptions are Clarke Peters as Lear’s chief minister Gloucester and Chukwudi Iwuji as his legitimate son Edgar. Peters is best known as the world-weary detective Lester Freeman on the HBO series “The Wire” but he has spent most of the last 40 years living and working in London and he seems comfortable enough with the Bard's language to speak it naturally and to imbue it with some emotion.
Iwuji, too, brings Brit cred as an associate artist with the Royal Shakespeare Company. I didn’t care for his interpretation of Poor Tom, the mad man disguise Edgar assumes after his villainous half brother Edmund's false charges cause their father to banish Edgar. But Iwuji is touching during Edgar’s bittersweet reconciliation with his father.

The problem is that I hadn’t come to see either of them but to see Lithgow’s interpretation of Lear and Annette Bening, making her return to the New York stage after a 30-year absence, as Goneril, the eldest of the king's two duplicitous daughters. Alas, neither star lived up to my expectations.
Lithgow is usually, as Glass tweeted, amazing. He’s at home on TV, in the movies and onstage. And he is equally adept in comedies ( The Front Page) dramas (M.Butterfly) and musicals (Dirty Rotten Scoundrels).

He's a good writer too. I had followed the journal he’d been keeping about the production (click here to see some of his entries) and I was excited to see what he would do with the role. My buddy Bill who’d sworn off seeing another Lear, is such a Lithgow fan that he broke his vow so as not to miss this rendering of the king.

Lithgow is too fine an actor to be bad but there’s no there to his Lear.  Pivotal lines like “O, reason not the need!” and “O! let me not be mad” pass by unnoticed. He works hard but the labor has too little effect.
Bening, on the other hand, seemed miscast right from the start. At 56, she’s only 12 years younger than Lithgow but I suppose her playing his daughter might be excused by the fact that those medieval folks started procreating early.

What can’t be excused is the fact that Bening is so tentative in the role. She tripped over her lines several times at our performance and kept moving her hands erratically as though she didn’t know what to do with them. During the climactic sword fight between Edgar and Edmund, she ran back and forth in front of the stage like a rookie soccer goalie.

Sullivan has said he wanted a visceral production and fight director Rick Sordelet has choreographed some convincing moves (click here to read about how he did it). But Sullivan pushes things too far during the scene when Gloucester's eyes are gouged out: he has designer Susan Hilferty put a white dress on Lear's second daughter Regan (played by Jessica Hecht with her trademark, but here ineffectual, flibbertigibbet mannerisms).

The idea is clearly to shock the audience with the red blood stains on the stark white dress but I was just bemused by why the character would change into something so impractical.

To be fair, Lear is a notoriously difficult play to pull off. This is the third one I've seen in just the past five months and none of them have worked. But, unlike Ira Glass, I'm not giving up on Shakespeare or on this play. In fact, I'm so eager to see a good production of it that I've been poking around the King Lear website (click here to check it out) looking for a version to download. If you know one, I'd appreciate your letting me know about it.