Between Riverside and Crazy is the Place to Be 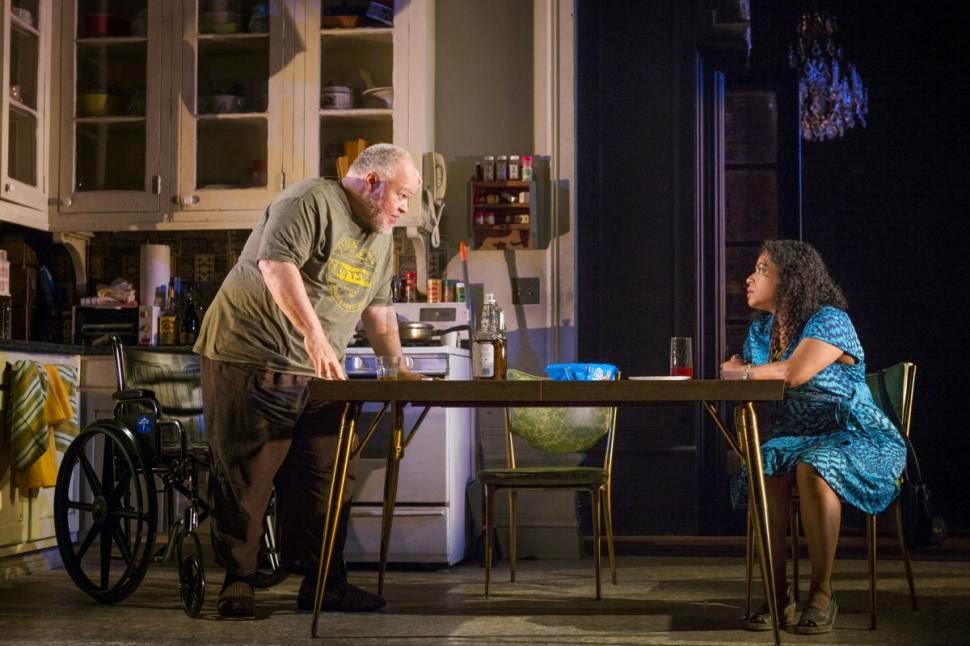 Between Riverside and Crazy, the new play by Stephen Adly Guirgis, ends its six-week run tonight. And that’s a shame because the Atlantic Theater Company's Linda Gross Theater space only seats about 200 people and a whole lot more should have had the chance to see this flamboyantly entertaining play.

My husband K and I only caught up with it this week and are so glad we did. For like Guirgis' previous play, The Motherfucker With The Hat (click here to read my review) this one realizes that poor people are primarily just people without money and so it treats them and their concerns with the kind of respect, humor and affection that far too many other plays usually reserve for the well-off.
The story centers around Walter Washington, a former cop with more problems than Job (the religious allusions are entirely appropriate since faith is a constant undercurrent in Guirgis’ work, which includes Our Lady of 121st Street and Jesus Hopped the 'A' Train).

Walter’s beloved wife has recently died. He’s drinking all day and struggling through weekly visits from a proselytizing Church Lady. His grown son Junior, recently released from prison, has moved back home and brought along a floozy girlfriend and an ex-con pal with daddy issues.
Meanwhile, Walter’s landlord, eager to gentrify, wants to evict him from the rambling rent-controlled apartment on Riverside Drive that has been Walter’s home for years. And, most egregiously, the NYPD still refuses to pay the settlement that Walter, who is black, has been demanding ever since a white cop mistakenly shot and disabled him eight years earlier.

That’s a whole lot of plot and, to be honest, narrative is not Guirgis’ strong suit (lots of ends remain loose at the play's conclusion). But he is a master at creating robust characters whose rough surfaces belie their rich inner lives and dialog that seamlessly mixes scatology and philosophy, street talk and poetry.

These are the kind of rare parts that all actors yearn to play and that tend to be in even shorter supply for actors of color. Which is why Guirgis, a longtime member of the LAByrinth Theater Company, probably the most diverse company in the city, if not the country, has made a habit of creating roles specifically for African-American and Latino actors.

And the entire Between Riverside and Crazy cast, under the nimble direction of Austin Pendleton, shows its appreciation for the gifts they've been given by turning in one bang-up performance after another.
Leading the pack is Stephen McKinley Henderson, the rotund character actor who has leant invaluable support to dozens of plays, particularly those by August Wilson. But this time out Henderson gets to command center stage. Guirgis is reported to have written the role of Walter for him and Henderson’s natural and yet nuanced performance proves that he deserved the honor (click her to read a profile of the actor).
And although she doesn’t arrive until the second act, Liza Colón-Zayas goes toe-to-toe with Henderson as a mysterious woman who helps Walter achieve an epiphany (click here to listen to a short interview with her).

I could go on but as I do, I get more and more annoyed that there's been no talk of transferring this show. Hello producers and artistic directors out there: someone should give Between Riverside and Crazy the full respect—and longer run—it deserves.

Labels: Between Riverside and Crazy