"Stop Hitting Yourself" is Too Self-Indulgent 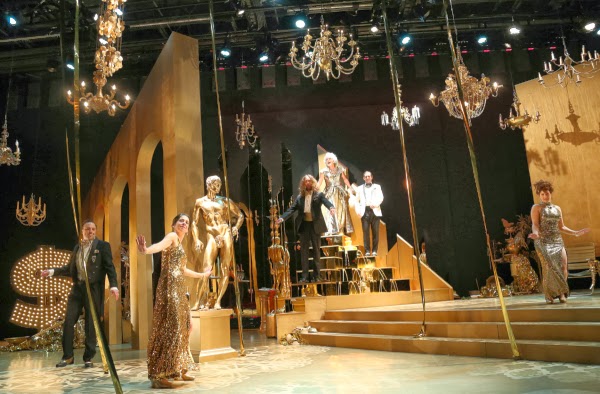 Mincing words would be a waste of time so I’m going to get right to it:
I don’t know what the hell the folks at LCT3 were thinking when they booked Stop Hitting Yourself, a theatrical hodgepodge created by Rude Mechs, the experimental theater collective from Austin, Texas.

LCT3, the part of Lincoln Center Theater that champions new plays, has made its name with shows like 4000 Miles, Slowgirl and the Pulitzer-Prize winning Disgraced that all center on intimate familial relationships that provide a prism through which to view larger societal issues. To say that Stop Hitting Yourself is a departure from those dramas would be like saying Lady Gaga likes to dress up.
Maybe the LCT3 folks were swayed by the group's reputation. Over nearly 20 years, the Rude Mechs have devised works collaboratively and their eccentric productions have played around the world. The company was one of the first to receive a grant when the NEA launched its New Play Development Program three years ago. They have a hip rep (click here to read about the group).

For Stop Hitting Yourself (I'm assuming the title has some masturbatory meaning) the company has thrown together songs, tap dancing, deadpan humor, diatribes about global warming and income disparity, some slapstick and a heavy dose of audience participation.

But although the Rude Mechs clearly pride themselves on being idiosyncratic, the production employs several tropes that have been popping up with increasing regularity.  The set features a collection of thrift-store items, albeit in this case all gold-gilded. There’s a lot of direct address to the audience, in this case, ad-libbed confessionals. The result is a self-indulgent mess.
Now I’ll admit that I tend towards the traditionalist end of the theatergoing spectrum but I’ve been known to enjoy venturing outside my comfort zone. Here, I just kept wondering if anyone in the company (perhaps Kirk Lynn, listed as the show's writer, or Shawn Sides, credited as director) had the veto power—or even the inclination—to say “No, this isn’t working.”
Stop Hitting Me’s plot, such as it is, revolves around a talent contest that will be judged by the queen (here played by a guy in drag who gets around on a motorized scooter) of the mythical country in which the show is set.

One of the contestants is Wildman, a Christ-like figure who represents altruism. He is lying on the stage when the audience enters and after he persuades an audience member to help him get up, he announces that the coming events will end with his death.
Wildman's sole opponent is listed in the Playbill as The Unknown Prince.  He represents greed. The prince will end the play with cheese on his face. Literally. One of the centerpieces of the set is a fountain that, for some unknown reason, spews a Velveeta-like goo.

According to the program notes, the show was inspired by thoughts about “charity and money and personal extravagances” as seen through the prism of Ayn Rand’s dystopian novel “Anthem,” about a Big Brother-style society that oppresses individualism. Workshop productions were held in Austin before the show migrated to Lincoln Center.

Stop Hitting Yourself still carries the air of show put on by a smug group of college kids, conspicuous with their intellectualism and more concerned with entertaining one another than the audience. Several cast members cracked up as their colleagues tried to top one another with their revelations during the confession sequences at the performance my friend Ann and I attended.

Still, there may be an audience for this kind of showing off. During one of the audience participation sections, a cast member brought a guy up onstage and offered him a dollar if he’d strip. The guy did it.

I thought he might have been a plant but when Ann and I rode down from LCT3’s roof-top Claire Tow Theater, the stripper was on the elevator.  “I thought you were part of the show,” another rider said.  “No,” replied the stripper before he and his date walked off into the cold winter night. “I guess I’m just a wild kind of guy.”

I guess he's also the kind of audience the LCT3 folks were thinking of when they scheduled the show.