"Machinal" is a Finely-Crafted Piece of Theater 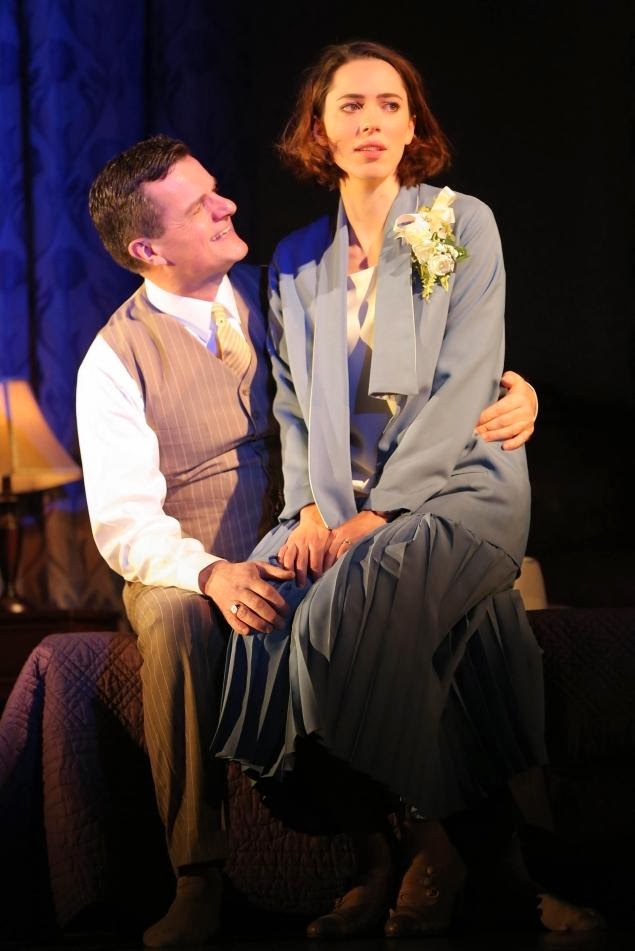 Machinal, the 1928 drama inspired by the real-life story of a woman who murders her husband, is not an easy play to like. And so I can’t really use the word "like" to describe how I feel about the revival that recently opened at the Roundabout Theatre Company’s American Airlines Theatre. But I can say that I greatly admire this production. And since I’ve so often complained about the shows the Roundabout has chosen to put on, let me also say that I applaud the company’s decision to give this play its first Broadway production in 86 years.

Plays by women still have a tough time making it to Broadway let alone into the canon of works that get revived there. But Machinal was written by Sophie Treadwell, a journalist (she covered the Mexican Revolution and interviewed Pancho Villa) playwright (she wrote over a dozen plays between 1906 and 1967, three years before her death at 85) and feminist who marched for women’s suffrage (click here to read more about her).
In a kind of precursor to the ripped-from-the-headlines approach of TV procedurals like “Law & Order,” Treadwell based Machinal on the sensational 1927 case of Ruth Snyder, a Queens housewife who killed her husband and was the first woman to die in the electric chair at Sing Sing.

The real Snyder took up with a lover and took out a life insurance policy on her husband before the murder. But Treadwell, echoing the theme of alienation in Elmer Rice’s The Adding Machine, turned the story into an expressionistic character study of how an everywoman trapped in the gears of the Machine Age might resort to desperate means to break out.
Opportunities for women today are obviously different from what they were in the '20s but Treadwell’s writing is still surprisingly fresh. There are sharp references to homosexuality, abortion and an ambivalence about motherhood that must have shocked the play’s original audiences. And Helen remains a juicy part for an actress.

This production boasts the Broadway debut of Rebecca Hall, the gifted British actress who is also the daughter of the celebrated director Peter Hall. And Hall commits fully to the role. Using her impressive height (she looks to be almost 6 ft.) she turns Helen into a figure who physically can’t fit into the confines of marriage and motherhood that society has set for her (click here to read a Q&A with the actress).

It’s an impressive performance. And director Lyndsey Turner stages the play with an even more impressive flair that includes syncopated speech and choreographed gestures (click here to read more about their approach to the play).

But I wasn’t onboard with all the choices Turner and Hall made. I would like to have seen a bit more of Helen's falling apart instead of just the deadening end result of her repression.

On the other hand, I totally bought the choices made by the always admirable Michael Cumpsty who makes the husband neither odious nor overly sympathetic, which, in turn, makes the wife’s inability to accept him all the more symbolic and tragic.

Also good is Morgan Spector, who brings the right mix of hunkiness and wariness to the role of the lover, the part that marked the Broadway debut of Clark Gable (click here to listen to cast members talk about the show).
But it’s the design that’s the true star of this production. Es Devlin has created a monochrome box that revolves on a turntable to create the play’s different settings, making literal the cramped feelings Helen suffers. The nine brief scenes are strikingly lit by Jane Cox and Matt Tierney’s sound design is outstanding, evoking both the relentless noises on the street and the similar cacophony inside Helen’s troubled mind.

The box's machinery broke down on opening night and reportedly stopped the 95-minute show for nearly an hour (click here to read how stagehands rescued the evening by using muscle-power to turn the box). But everything worked perfectly when my friend Jesse and I saw the show a week later.
Machinal may not be for everyone and there's even a Gud-oh/God-oh debate over how to pronounced its name.  I've always said it "Mack-in all" but some posher folks are now saying "Mache-in all. However, you say it, true theater lovers should make the effort to see it.