"I Could Say More" Tries to Say Too Much 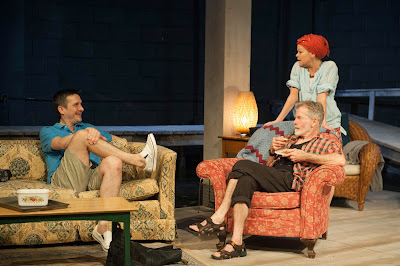 Gay plays usually fall into three categories: the coming-out story, the AIDS drama, the cri de couer for acceptance from the wider society...or from the self.  So I was intrigued when I heard about I Could Say More, which bills itself as the tale of a modern family, centered around the long-together-but-recently-married couple Carl and Drew, their adopted teen son and the friends and relatives who visit them at a beach house in the Hamptons.

I thought it might be kind of like Terrence McNally's Lips Together, Teeth Apart or Love! Valour! Compassion!, only without the underlying existential angst. But it turns out that angst, or at least the right kind of angst, is useful when it comes to making a sturdy play.

Playwright Chuck Blasius has stocked his tale with plenty of anxieties and many of them are ripe for dramatic exploration: the gay couple struggling to figure out what marriage means for them, the challenge of romantic love between a gay man and a straight woman, the adolescent confusions of a straight kid raised by gay parents.

But Blasius, who directed the play and stars in it, doesn’t develop any of those themes. He does include a few nice speeches and an audience-pleasing supply of bitchy lines (plus a few groaners) that keep things moving along.  But he never makes it clear where it's all supposed to be moving toward.

Story lines are picked up and dropped, characters behave one way and then another without apparent reason, except for the overused crutch of too much drink. Then, after almost two and a half hours, the play simply stops. Ironically, the only people who seem to have reached any kind of resolution are the sole hetero couple.

The production, particularly Clifton Chadick’s comfy-looking set, is nicely put together and although the acting is uneven, there were some nuanced turns by Keith McDermott and Monique Vukovic as two of the houseguests and Brandon Smalls as the son (click here to watch the cast talk about the show). But these parts don’t add up to a satisfying whole.

My intrepid theatergoing buddy Bill and I happened to attend Monday’s opening night performance at the Hudson Guild Theatre and so the audience was filled with folks eager to be supportive. But although they whooped when each member of the nine-person cast took a bow at the curtain call, most of them looked just as confused by what we'd just seen as Bill and I were.

I don’t necessarily need, or even want, a play to spell out everything for me but it doesn’t really work when one just throws a bunch of stuff at you.  In the end, I Could Say More is just as frustratingly opaque as its doesn't-say-anything title.

Labels: I Could Say More