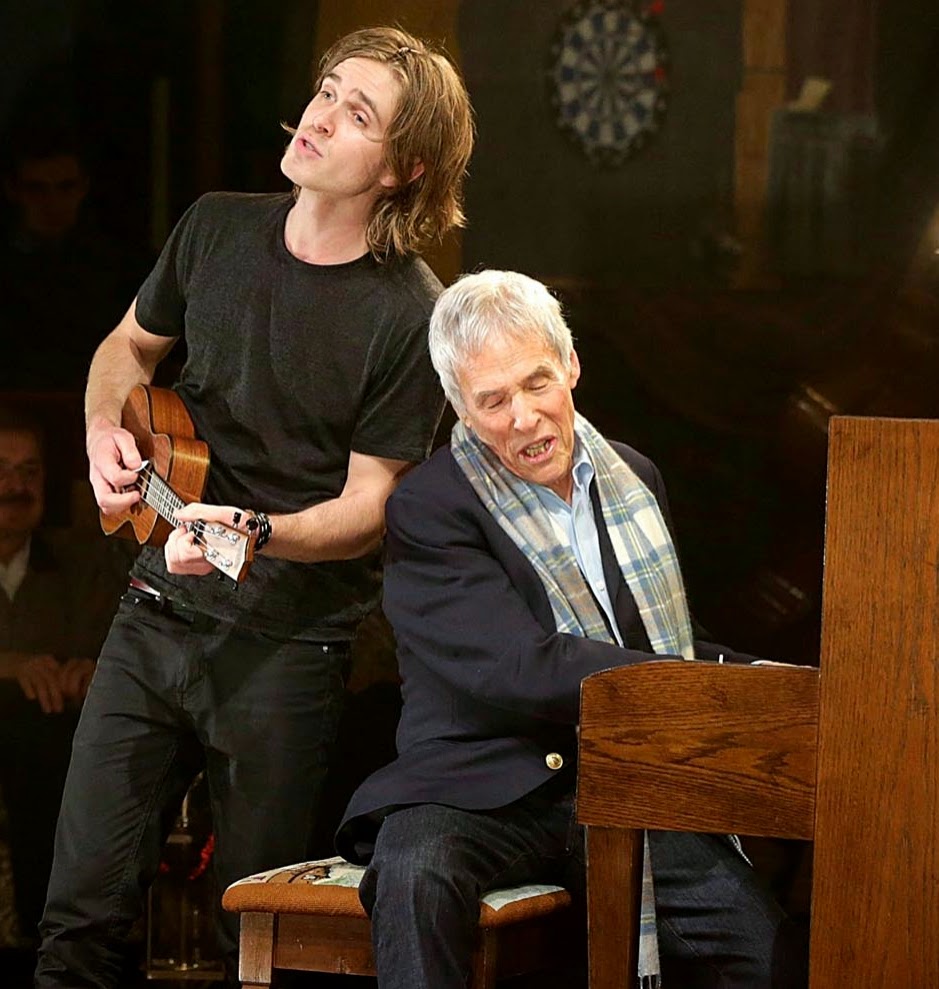 If you’d asked me to name my favorite songwriters, the composer Burt Bacharach and his frequent lyricist Hal David wouldn’t have made the list (in case you’re interested, Cole Porter, George and Ira Gershwin, Stephen Sondheim, Laura Nyro, Carole King, James Taylor and The Beatles would have). But my disregard of the Bacharach-David songbook was before I saw What’s It All About?, the new musical revue that subtitles itself “Bacharach Reimagined.”

My epiphany occurred as I sat in New York Theatre Workshop swaying to Bacharach’s melodies, silently mouthing the words to the 30 or so songs in the show and smiling at all the memories they evoked. For as I look back, Bacharach provided the “Mad Men” vibe to the soundtrack of my youth.
HIs songs convey a sophistication about love, its disappointments and the cool stoicism necessary to survive them that my younger self longed to have. And those same yearnings are present in What’s It All About?, which Kyle Riabko, a 26-year-old actor-musician with rock-star looks and front-man charisma, has turned into a 90-minute romantic song cycle  for the hipster generation.

As the story goes, Riabko, who appeared on Broadway in Spring Awakening and the Diane Paulus version of Hair, met the now octogenarian Bacharach at a studio recording session three years ago and eventually persuaded the composer to let him reorchestrate some of his old songs for a more contemporary sound, which basically means no strings, no horns, just acoustic guitar and a thumping rhythm section (click here to read more about the development of the show).
What’s It All About? has no plot. Riabko has simply recruited a multi-culti and multi-talented band of six other young musicians (click here to read about the casting process) and they all take turns—solo, in duets or larger groups—performing the Bacharach tunes.

The playlist includes such pop classics as “Walk on By,” “Anyone Who Had A Heart,” “A House Is Not a Home” and other songs first made famous by Bacharach and David’s favorite interpreter Dionne Warwick, along with tunes like “Raindrops Keep Fallin’ On My Head,” “What’s New Pussycat” and the title song from the movie scores the duo wrote.
Some of the singers are stronger than others but they’re all great to look at and each projects a latter-day-Brooklyn-style hipness (pork-pie hats for the guys, vintage tops for the gals) that’s kind of irresistible.

And director Steven Hoggett augments the aura with his trademark choreographed gestures—the flick of a wrist, a syncopated stomp—to underscore the subtext of each song.
My theatergoing buddy Bill was totally charmed by the show but the overall response has been divided. A few critics were knocked out by What’s It All About?; others simply knocked it (click here to read through some of the reviews).

I fall in the middle. I'm grateful to the show for reintroducing me to Bacharach and David but I did find parts of it to be a wee bit precious.

When the audience enters, the performers are already onstage, lounging on chairs and couches that have been suspended—for no discernible reason—on the walls of a set that’s been decked out to resemble a chic thrift shop. I kept worrying someone would fall as they clambered up and down for various numbers.

Still you’d have to be more of a grouch than I’m willing to be to naysay this affectionate tribute to old-style songwriting.  I'm not sure it delivers on the promise of reimagining Bacharach but that may be because Bacharach's music is fine just as he originally imagined it.

And there's time for you to make up your own mind about that cause the show has been extended to Feb. 2. And if you go, stick around cause after the show the entire cast races outside (or at least they did before the frigid weather set in) to serenade audience members as they leave the theater.

Labels: What's It All About?