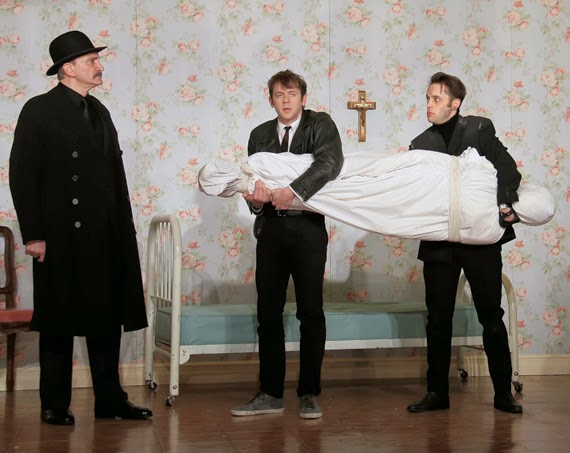 The challenge of reviving a game-changing work is that the game has already been changed and so it’s really tough to recreate the titillating shock of the original. The challenge of doing a farce is akin to that of making a soufflé, you need the right touch to transform its ingredients into an airy treat; in less deft hands, what’s in the pan falls flat.

The Red Bull Theater company takes on both challenges with its revial of Joe Orton’s dark comedy Loot, which opened this week at the Lucille Lortel Theatre, but the result is no puffier than a reheated pancake.
To be fair, Loot has always been a difficult show to pull off. Britain was just emerging from its dour post-War period and The Beatles were still wearing shag haircuts and matching outfits when the play premiered in a Cambridge theater in 1965 and closed a month later.

It scandalized audiences with its tale of bisexual bank thieves who hide the titular money they’ve stolen in the coffin of the mother of one of them; a shady detective who pretends to be from, of all places, the Water Board; a larcenous nurse whose seven husbands have all died under mysterious circumstances and a corpse that gets stuffed in a closet. The play lasted just 22 performances when it eventually migrated to Broadway.

Still, Loot has always had its fans. Its West End production, shortly after the Cambridge failure, won the Evening Standard Award. In 1970, three years after Orton’s longtime lover bludgeoned him to death in a jealous rage, a movie version of the play starring Richard Attenborough, Milo O’Shea and Lee Remick was a hit at the Cannes Film Festival.

Later in 1986, a Manhattan Theatre Club production won the Outer Critics Circle Award for Best Revival and introduced Alec Baldwin to Broadway when the show transferred there. And just this past summer, the New York Times proclaimed a production at the Westport Country Playhouse to be “comic perfection.”
Alas, the comedy in the current revival is far more heavy-handed. The six-member cast, under the direction Red Bull’s artistic director Jesse Berger, seems at times too timid to be as zany as the material demands and at others to be pushing too hard for laughs.

Several of the actors repeatedly tripped over their lines at the performance my friend Priscilla and I attended. Which is really a sin because although Loot may not be able to shock as it did five decades ago, it is still wickedly funny enough to make a modern-day audience laugh.
Only Jarlath Conroy, who plays the grieving and pious widower of the corpse, seems to get that. He manages to strike just the right note of serious inanity that the rest of this production sorely misses.

I saw the Westport production, and unlike the NYTimes critic I found it far from "comic perfection." Rather, the comedy seemed to me labored and, well, just not funny-- this despite what I thought were fine performances. I left the theater wondering iI "Loot" is simply an example of an avant-garde play that has passed its expiration date.