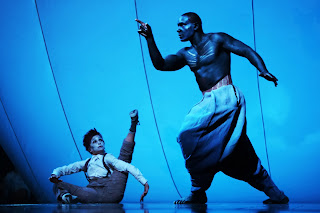 If you've seen the opening number of The Lion King or even some of the outlandish set pieces in Spider-Man: Turn Off the Dark (which turns off for the final time on Broadway tonight) you know that you don’t go to a show directed by Julie Taymor for the acting or, that matter, for the narrative. You go for the visual splendor and the other wondrous things that pour out of Taymor’s bountiful imagination.

And they’re all on brilliant display in her production of A Midsummer Night’s Dream, which is playing through Jan. 13 at the shiny new home of Theatre for a New Audience, down the street from BAM in Brooklyn’s growing Cultural District (click here to read about the new building and the changing neighborhood).
Shakespeare’s tale about four mismatched lovers who wander into a fairyland forest is the perfect match for the enchantments that Taymor likes to create (click here to listen to her talk about the show). The result is that this Midsummer Night's Dream is a buoyant mix of Commedia dell’Arte meets Cirque du Soleil.
Actors disappear right before the audience’s eyes. Puppet creatures prance across the stage. Yards of gossamer material undulate to the ethereal music composed by Taymor’s husband and frequent collaborator Elliot Goldenthal. A band of 20 youngsters, illuminated by candlelight, serve as the story’s chorus and its fairies.
And yes, there is flying.  But instead of the high-tech apparatus that caused so many problems (and a few serious accidents) at Spider-Man, the lifting here is done the old fashion way: with men using muscle power to pull ropes.
And while it takes a back seat to the spectacle (special shout-outs to Constance Hoffman for the sexy costumes, Sven Ortel for the mesmerizing video projections and Donald Holder for the nimble lighting) the cast isn’t bad either. Although in typical Taymor fashion, they’re generally more fabulous to look at than to listen to.
Tina Benko is a reigning goddess of the downtown theater scene and she’s never been more majestic than she is here as the fairy queen Titania. The British actor David Harewood, best known as the equivocating counterterrorism chief on TV’s “Homeland,” not only speaks his speeches well but is marvelously virile as her husband King Oberon.
Also worth singling out is Max Casella, who brings an hilarious wiseguy sensibility to Bottom, the leader of the workingmen who are preparing a play to entertain the noble people of the realm, and Mandi Masden, amusingly flustered as the lovelorn Helena, who can’t win the affection of the man she loves and then, through fairy mischief, finds herself pursued by him and another suitor.
But most invaluable is the pixieish Kathryn Hunter, reminiscent of Linda Hunt in both size and androgyny, who is a classicist (having performed at Shakespeare’s Globe in London) an avant-gardist (having won an Olivier Award for her work with Theatre de Complicite) and an amazing contortionist who is one of the sprightliest (in every sense of the word) Pucks I’ve ever seen (click here to read how the actress and her director devised the character).
My theatergoing buddy Bill was totally turned off by Hunter’s idiosyncratic and limb-twisting performance and he didn’t care much more for the rest of the production either.  He and several other critics complain that Taymor was so busy creating her beautiful stage pictures that she paid too little attention to Shakespeare’s equally beautiful language.
Which is true.  But I was still dazzled by everything she concocted for this fantasia.  And I can hardly wait to see what she will come up with next.