"The Glass Menagerie" Really Does Glitter 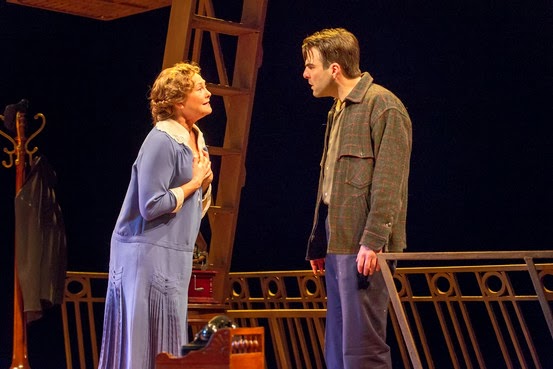 From its out-of-town run at The American Repertory Theater in Cambridge last spring right through to the news this week that the Broadway production has recouped its investment, the current revival of The Glass Menagerie has been praised as a revelatory production that will be remembered for the ages.  And you’re going to hear no differently from me.

As regular readers know, Tennessee Williams sits high in my pantheon of great playwrights. And this memory play, based on Williams' own wrenching decision to abandon his overbearing mother and emotionally fragile sister in order to fulfill his artistic destiny, is his most poignant work and one of my favorites in the entire canon.
Then there's my ongoing adoration for the great Cherry Jones, which was only intensified by her interpretation of the mother Amanda. While she's often been portrayed as a hapless harpy, Jones' Amanda is a Mother Courage fighting in the best way she knows for her version of happiness for her children (click here to read a terrific profile of the actress).

And Jones’ powerhouse performance is equaled by that of Zachary Quinto as the son Tom. Quinto’s day job as a movie star (“Star Trek”) and TV star (most recently in the repertory company of “American Horror Story”) may account for some of the ticket sales but, as he proved in Signature Theatre’s 2010 revival of Angels in America, he is a superb stage actor and his portrayal of Tom limns both the deep love for his family and the desperate need to get away from them that the young Tennessee, still then called Tom, so clearly felt (click here for a Q&A with the actor).
Finally, the show is directed by John Tiffany, who with the Tony-winning musical Once and the National Theater of Scotland’s magnificent performance piece Black Watch has shown himself to be one of the most creative directors working in the theater today.

I’ll confess that I did find some of the stylized gestures choreographed by Tiffany’s frequent collaborator Steven Hoggett to be distracting but the entrance of the sister Laura, affectingly played by Celia Keenan-Bolger, is an amazing coup de theatre.

Meanwhile, Bob Crowley’s spare set, surrounded by a moat of water, creates a poetic visual metaphor for a family adrift and a playwright forever haunted by his memories of them (click here to read how the designer evoked it all).

And yet for me, the most memorable thing about this production is the performance of Brian J. Smith in the comparatively small part of Jim O’Connor, the gentleman caller that Tom, in response to Amanda’s relentless urging, brings home as a prospective beau for Laura (click here for a profile of Smith).
The scene between Laura and Jim is the heart of the play. Jim’s a former jock whose glory days are behind him and most actors play him as such a blowhard that it’s instantly clear Laura doesn’t stand a real chance. But Smith finds the humanity in the man, teasing out his disappointments and dreams in a way that make him just as vulnerable as Laura and the tiny animals in the glass collection that gives the play its name.

Despite my having seen the play half a dozen times, Smith made me believe that Jim and Laura might make a good life together. And I felt all the more heartbroken when the spell was shattered (click here for an excellent deconstruction of how he and Keenan-Bolger did that). Smith has appeared in other Broadway productions I’ve seen but I don’t remember him in them. I doubt though that I will ever forget his performance in The Glass Menagerie.