"Séance on A Wet Afternoon" Is Haunting 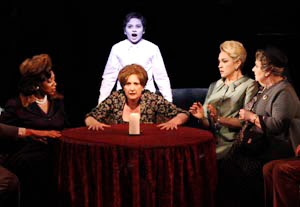 It was, by chance, a rainy afternoon when I saw Séance on A Wet Afternoon, the haunting new opera that is playing just through this weekend at the New York City Opera. Because seeing theater is always my first choice, I don’t usually have much time left for opera but I confess to a weakness for new ones.
Over the years, I’ve seen the original productions of Nixon in China, The Death of Klinghoffer, The Great Gatsby, Margaret Garner, Dr. Atomic,  and The Ghosts of Versailles, which, at the time, was the first new opera to debut at  The Metropolitan Opera in 25 years. But not one of them moved me more than Séance on A Wet Afternoon, the first opera by Stephen Schwartz, the composer of the hit Broadway musicals Godspell, Pippin and the megahit Wicked.
Alas, my admiration isn’t shared by the opera critics. They give Schwartz, who did both the libretto and the music, an A for effort but drag down his overall grade by condemning Séance on A Wet Afternoon for being too accessible.  That, of course, is precisely what I love about it.
Schwartz based his opera on an existential mystery novel and the subsequent 1964 film adaptation that starred Kim Stanley. In both, an unhappy and unstable psychic named Myra concocts a plan to kidnap the daughter of a wealthy family so that she can gain glory by leading the police to the missing child. Myra’s accomplices are her milquetoast but devoted husband Billy (played by Richard Attenborough in the movie) and the ghost of their own dead son Arthur.
It’s a great scenario for an opera, filled with moments of heightened, over-the-top emotion that can be put to good melodramatic and musical use. And, in Schwartz’s retelling, the tale unfolds with compelling intensity, a marvelous mash-up of Passion and Next to Normal, catnip for any lover of serious musicals.
But, of course, even more than in musicals, it’s the music that makes an opera. The trend in modern operas has been for complex, atonal scores.  Schwartz has consciously gone in another, more ear-pleasing direction. “That is not to say the music is not more harmonically complex than much of my theatre work,” he explained in a fascinating Playbill interview (click here to read all of it). “But it is still melodic and accessible. I may get criticized for that, but that's the way it is.”

And, indeed, critical bashing is the way it has been.  The New York Times has dismissed Schwartz’s score as “a gloss on Bernstein, or tepid Copland” while New York Magazine puts down his arias as mere tunes. But the music sounded lushly melodic to me and there were passages that actually made me swoon with pleasure.
Even the naysayers agree that the production is first rate.  Schwartz says he wrote the part of Myra for the soprano Lauren Flanigan, who has specialized in contemporary operas and can act as well as sing. And her performance validates his decision. Her “mad” scene at the end of the first act is both wrenching and riveting.
Flanigan's cast mates are equally good. The baritone Kim Josephson is in fine voice and poignant as Billy. The child singers Michael Kepler Meo as Arthur and Bailey Grey as the kidnapped girl are also excellent. And the soprano Melody Moore drew cheers as the girl’s grieving mother.
They are all deftly directed by Schwartz’s son Scott, whose previous credits range from Golda’s Balcony on Broadway to Bat Boy: The Musical off-Broadway. Here, his sensitive staging gives nepotism a good name.
Kudos must also be reserved for Broadway vet Heidi Ettinger who has created a magnificent set –a revolving two-story house with eerie translucent walls—that is beautifully lit by David Lander.
New operas can be like spring rain storms.  They blow in, drench the cultural landscape and then evaporate. Only four more performances of Séance on A Wet Afternoon are left. There are no current plans to record the opera and no future productions scheduled. So go, whatever the weather over the next few days, and see this one while you can.

Labels: Séance on A Wet Afternoon