"The School for Lies" Is a Lesson in Erudite Fun 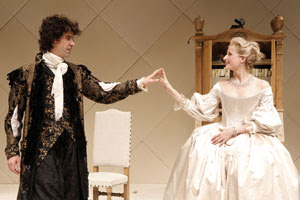 It’s been a hectic few weeks as the spring theater season drew to its official close on April 28.  And that’s a large part of the reason that I missed my usual posting day on Saturday. I’ve seen so busy seeing 10 plays and musicals over the last two weeks that I haven't had the time to write about them. There have been hits and misses among the things I’ve seen but it’s hard to think of one that’s been more fun than The School for Lies, which opened last night at Classic Stage Company.
For the playwright David Ives has whipped up a brilliant riff on Molière’s classic play The Misanthrope. That play, widely considered Molière’s best, offered trenchant commentary on the follies of court life.

The situation in The School for Lies (the intellectual and romantic interplay among a set of 17th century French aristocrats) and the characters (the haughty Alceste who is disdainful of everyone he meets, the flirtatious widow Celimene who is desired by every man she meets, the bitchy scandalmonger Arsinoe, who can’t wait to gossip about everything she hears) remain the same as in the original.
But Ives, who is probably best known for being the in-house book adapter for the Encores! productions, has shuffled the plot around and added relationships and other bits of business (some brazenly borrowed from Shakespeare) that put even more air in Molière's satirical soufflé, while still managing to make some pointed observations about 21st century life.
The rhyming couplets distinctive to the French plays of Molière’s day are there too but Ives has given them a contemporary flavor with hilarious references to things like cell phones, Pilates and hip-hop. (Click here to read a terrific piece on how Ives put the whole thing together.)

Anachronisms can often clang the ear but these are so laugh-out-loud witty that I wish someone would do an original cast recording so that I could just hear the lines over and over again. The Backstage critic David Sheward was so inspired that he wrote his entire review in couplets (click here to read it).
The nine-member cast that the CSC assembled is sheer perfection. Everyone deserves to be singled out.  But I’ll unfairly focus on just three. The first has to be Hamish Linklater, a regular on the TV series “Ugly Betty” and “The New Adventures of Old Christine,” who plays Alceste, whom Ives has slyly renamed Frank to underscore the character’s obsession with truth-telling.

I last saw Linklater as Bassanio in the Public Theater production of The Merchant of Venice that played in the park last summer and thought he was wrong for that part but his puppy-dog quality works here and he’s thoroughly charming as Frank.
Meanwhile, Mamie Gummer has never looked lovelier and seems to be having a ball as Celimene (click here to read a Q&A she did with Theatermania that includes answers to a couple of questions about her mom Meryl Streep.)  But my personal favorite is the actor Hoon Lee, who plays the pragmatic-minded Philante who greets the audience at the start of the play.  Hoon may be the most lucid speaker of classical-style language this side of the Atlantic.
The all-star creative team, expertly lead by director Walter Bobbie, has brought it’s ‘A’ game too. John Lee Beatty’s all-white set is simple but elegant and with just a few pieces of furniture and a quilted backdrop manages to capture the opulence of a 17th century salon.

William Ivey Long’s costumes, particularly the women’s puff-pastry gowns, are magnificent (click here to see a video in which he discusses how he came up with the designs). And Peter Kaczowrowksi’s lighting makes all of it sparkle like a glass of good champagne.
As always, CSC’s artistic director Brian Kulick and his staff have put together an informative insert that puts the production in perspective. The opening article offers a fascinating explanation of how Ives’ innovations fit into the tradition of “lively turning,” in which playwrights like Molière and Shakespeare combined familiar material with their own aesthetic sensibilities to create the masterpieces we still treasure.

The School for Lies isn’t in that league but it’s a delightful mash-up that any true theater lover should make time to see.