"The Shaggs" is Quirky But is That Enough? 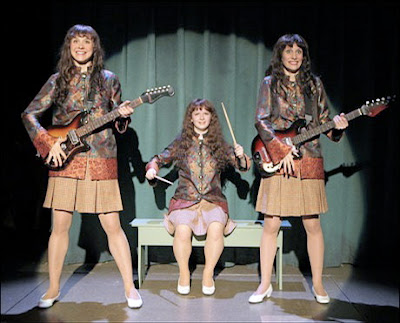 Over the years, Playwrights Horizons has developed a reputation for being an incubator of ambitious musicals that dare to be different. William Finn’s In Trousers and March of the Falsettos got their starts there.  As did Adam Guettel’s Floyd Collins.  When Stephen Sondheim temporarily soured on Broadway, he found refuge at Playwrights Horizons where he developed Assassins.  Later, Scott Frankel, Michael Korie and Doug Wright nurtured Grey Gardens there.
And now, the company, in partnership with New York Theatre Workshop, is presenting The Shaggs: Philosophy of the World, a quirky show based on the real-life story of a blue-collar dad who sought fame by forcing his daughters to form a rock band and record an album that is considered by many to be the worst ever produced—but by a few like Frank Zappa and Kurt Cobain to be a unique work of genius.
You can see why the folks at Playwrights Horizons would be drawn to The Shaggs.  Like Grey Gardens, the Tony-winning musical version of the riches-to-rags tale of Jacqueline Kennedy Onassis’ eccentric relatives, it’s about outsiders whose story reveals the underbelly of the American dream and yet who are loopy enough in their own right to be entertaining.
Creators Joy Gregory and Gunnar Madsen are musical first-timers but they've spent the last 10 years developing The Shaggs, which has had previous productions in Los Angeles and Chicago. Their challenge has been to turn a quirky pop cultural footnote into a compelling show and to convey the band’s music without simply reproducing the group’s odd sound (click here to read a piece about the making of the show).
Upping the degree of difficulty for the collaborators is the fact that they've had to put the show together without totally ridiculing the real-life Wiggin sisters, two of whom are still alive (click here to listen to a BBC interview with them). Alas, the show my theatergoing buddy Bill and I saw in an early preview is only partly successful.
A full half hour in, I still didn’t know exactly what story Gregory and Madsen wanted to tell. The plot covers all the high points in the Wiggin’s life—the palm reading that prompted the forming of the band, the dad’s decision to home school the girls, a secret romance with a neighborhood boy, the session in which the band recorded the infamous album (click here to see the New Yorker's terrific 1999 profile about the family)—but just recounting these events isn’t enough.
The dad Austin, a mill worker in New Hampshire, is clearly the driving force but, despite an intense performance by Peter Friedman, we never get under Austin’s skin. Gregory and Madsen may have envisioned him as a male version of Gypsy’s Mama Rose but, despite a song called “Austin’s Howl,” they fail to give him the clarifying catharsis of a “Rose’s Turn.”
Shaky New England accents aside, the portrayal of the sisters is nicely handled by a trio of talented young actresses, one of whom is graduating from the Yale School of Drama this month. But they, too, are hobbled by the one-note characters they’ve been given to play: one sister is meek, another rebellious, the third has mental problems.
One indication of the book’s own problems is that in this fictionalized version of the story, the mentally ill sister has affected muteness but is allowed to break her silence without explanation whenever a speech from her is needed to help move the plot along.
The score is a blend of power ballads and sunshine-pop tunes (think The Association’s “Cherish”) that flourished in the brief interregnum between the Beatles’ U.S. arrival in 1964 and the harder-edged psychedelic rock of 1967’s Summer of Love. There are also a few side trips into The Shaggs own limited repertoire (the group’s sole album, also named "Philosophy of the World," has been reissued and is available on sale in the lobby or you can click here to listen to its most famous song).  But none of the music stood out—well, the Shaggs song kind of did but you know what I mean.
Still, I can’t say that I had a bad time either. And I confess that I’ve now become obsessed with the story of the real-life Wiggins and have read and listened to everything I can find on them (click here to see a piece the New York Times did). So I salute Playwrights Horizons for, once again, refusing to play it safe but I’m not sure that it’s a good sign for a musical, when you’d rather read about it than listen to it.