A "King Lear" That May Be a Bit Too Foolish 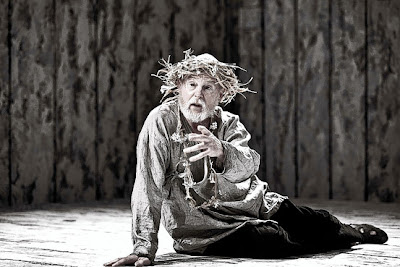 The Donmar Warehouse’s production of King Lear with Derek Jacobi as the addled monarch closes at BAM this weekend but I still want to get in my two cents about the show.  Besides, it really wouldn’t have mattered much if I’d managed to add them four weeks ago when Lear opened because the run has been sold-out nearly from the start.
Some theater lovers collect Shakespeare productions, hoarding as many versions of one play as they can and then hauling out references about them to laud over their friends. I’m not as ambitious as some (click here to read about one avid collector) but I’ll confess to a weakness for Hamlets, Macbeths, Richard IIIs and, recently, I think I’ve average a Lear just about every other year.
At the risk of sounding like Goldilocks, I found Kevin Kline’s at the Public Theatre back in 2007 to be too young and robust and Christopher Plummer’s at Lincoln Center in 2004 to be too old (unable to carry his Cordelia in at the end of the play, he had to drag her on stage).  But, alas, I can’t say I found this one, directed by the Donmar’s acclaimed but departing artistic director Michael Grandage, to be just right either.
It has, however,  been a hot ticket for a discerning kind of theatergoer. My friend Joy, a confirmed Manhattanite, didn’t hesitate when I asked if she wanted to tramp out to Brooklyn to see this Lear with me. And outside the theater, we ran into another friend of ours whose busy schedule keeps her from seeing much theater but made time to see this.
Inside, I spotted Jon Meacham, the former editor of Newsweek chatting with Calvin Trillin, the longtime writer for The New Yorker.  We all seemed pretty pleased with ourselves for being there.
I’ve been a Jacobi fan since I first saw him in the miniseries “I, Claudius”  back in the ‘70s and I got a kick out of his Archbishop of Canterbury in this year’s Oscar-winning movie “The King’s Speech” (click here to read a revealing profile of the actor). But t I found his take on Lear as a perpetual toddler to be odd and ultimately unsatisfying.
However, I can see the logic of his choice. Like indulged children, imperious potentates are used to having their way. Certainly a decision to give up a throne and divide up one’s kingdom is as childishly whimsical as the belief that closing one’s eyes will make the world disappear.  But Jacobi’s Lear seems so petulant and loopy right from his entrance that there isn't a lot of room left for further unraveling as the plot unfolds.
With just a few exceptions, the supporting players strain to come up with distinctive spins on their characters as well. Alec Newman seemed so intent on making Edmund, the Earl of Kent's bastard son who tries to steal the patrimony from his legitimate brother, the most dastardly villain that even the most ardent Shakespeare collector has ever seen.  So much so that he might just as well have pasted on a Snidely Whiplash moustache and twirled it.
I breathed a sigh of relief each time Michael Hadley’s Kent appeared because he seemed not to have gotten the do-it-different memo and just turned in an unembellished but impressive performance. I also liked the ultra-chic look of the production designed by Christopher Oram: all black and white, except for the splotches of red blood in the gory scenes. I'd almost kill for the coat Goneril wore.

Now, I must say that my carping puts me in a distinct minority.  The show is currently one of the highest rated on StageGrade, the website that aggregates and averages the reviews of the top New York critics. Moreover, the New York Time’s Ben Brantley gave it his thumbs up, always a good thing for a production but particularly so for one aiming at the literati, as this one does. (Click here to read his and some other of those rave reviews.)
Maybe I’ve just OD’ed on Lears and I probably should just see some other Shakespeare for a while. Which I’d do, except that I’ve read that Sam Waterston is going to give the role a go at the Public this fall.  And I think he might make an interesting addition to my collection.

I agree -- I love Derek Jacoby, but in this performance he often seemed to be declaiming rather than acting. Thank you for this perceptive critique. Someone needs to speak truth, respectfully, to the King. Thank you!!!

Hey Kathy, thanks for leaving a comment. Challenging the king isn't nearly as hard as challenging the critical consensus. So your kind and encouraging words are much appreciated.