Shows to See, Whatever Happens at the Tonys 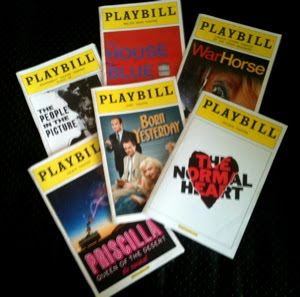 It’s finally Tony time and people who see only a few shows a year often use the Tony broadcast (on CBS this Sunday night at 9 p.m. eastern time) to decide which ones they should see.  That makes sense to me, particularly for the folks who’ll be vacationing in the city this summer and want to get some bang—or at least some bling—for their bucks.  But this has been a really fine year for Broadway (lots of original musicals, lots of original plays, lots of terrific revivals) and the Tonys can’t tell you everything you need to know about the season’s shows so I’ve decided to throw my two cents in on not just what you should see but why—and on which of you might enjoy each choice the most.
I’ve already given my shout-outs to:
The Book of Mormon, the sure-fire winner for Best Musical but it’s sold out for months

Jerusalem, with its sensational people-will-be-talking-about-it-for-years performance by Mark Rylance


Anything Goes, for Kathleen Marshall’s sensational dance numbers and Sutton Foster’s game performance, both also frontrunners in their Tony categories


And Sister Act, not a big Tony contender but big on good old-fashioned fun.
Now, here are six more that you should at least consider, and, in some cases, consider pretty quickly because Tony losers tend not to stick around too long after the ceremony:
Born Yesterday. This revival of the old Garson Kanin comedy about the political education of a not-so-dumb blonde isn’t doing that well at the box office but it should be selling out for Nina Arianda’s terrific performance. Whether she wins a Tony or not on Sunday, Arianda's performance has made the young actress a star and if you love great acting, you’ll want to be able to say that you saw her in the show that made it happen.
The House of Blue Leaves.  John Guare’s black comedy about a group of misfits on the day of the Pope’s visit to Queens in 1965 is directed by the hot director David Cromer and jam-packed with big names (Hollywood’s Ben Stiller and Jennifer Jason Leigh, Broadway’s Thomas Sadoski and Alison Pill) but the best thing about it is a heartrending performance by Edie Falco.  TV fans who have loved her as Carmela Soprano and Nurse Jackie should treasure the chance to see Falco disappear into the role of Bananas, a sad pill-popping wife who isn’t quite as crazy as her name suggests.
The Normal Heart.  You might think that this revival of Larry Kramer’s cri de coeur about the AIDS crisis in the ‘80s is outdated or too political but that means you’d miss a truly affecting love story, lots of laugh-out-loud moments and the best acting ensemble on Broadway this season.  The final moments alone are worth the price of admission and should be seen by serious theater lovers and everyone who believes that gay rights—be it the right to good health care or to marry and make a life with whomever you love—are human rights.
The People in the Picture.  This musical about a Holocaust survivor didn’t get great reviews and, to be honest, I don’t think it deserved them.  So why, you ask, have I put the show on this list?  Simple answer: Donna Murphy.  She’s giving a knockout performance in the show—actually she’s giving two knockout performances, as she portrays the same character in the 1930s and in the ‘70s.  Murphy's totally convincing in both eras and deserve to be seen. I’ve read that the show regularly brings tears to the eyes of the people who lived through the horrors of World War II. So this show might be just the one to take your bubbe or zeyde to see.
Priscilla Queen of the Desert.  Just about everything in this musical version of the 1994 movie about a road trip taken by three drag queens—the singing, the dancing, the costumes, co-star Nick Adams’ amazing abs—is outrageous.  If you’ve got a sweet tooth for high-calorie camp, then this is the treat for you.
War Horse. Steven Spielberg is already making a movie version of this children’s book about the cruelties of war experienced by a boy and his horse during World War I but no matter how splendid the movie may be, it won’t be as wondrous as this show, which is the odds-on-favorite to take Best Play honors tomorrow night. For all the animals in the stage production are portrayed by life-sized puppets the likes of which you’ve never seen.  This, as the saying goes, is a show for children—or inner-children—of all ages.  It’s what the magic of theater is all about.

I heard from a friend that The Mormal Hest was upposed to be really good. That and Anything Goes are at the top of my list of the next time I go back to NYC.

which won't be for another two years so so i'm hopinh it will still be open at that tine,

Hey Janine, thanks for commenting. The Normal Heart really is good but, alas, very few plays run for two years. However, it's different for musicals and there's a good chance that Anything Goes may be around when you get back to NYC. But even if it isn't, a national tour has just been announced and so maybe you can catch the show when it comes to a theater near you.

I find it interesting that Steven Speilberg has made a movie version of this. To me it says something about the quality of the story.
I looked up the Handspring Puppet Company to see what the creative process was that went into making the puppets. It was really interesting.
I'm glad I found some cheap War Horse tickets so that I could see it on stage.