"Through a Glass Darkly" is Too Murky 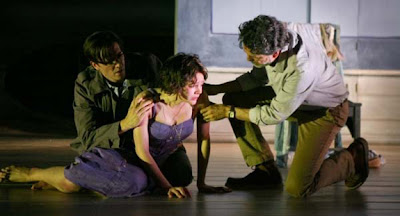 It probably makes me sound like a philistine to say this but I’ve never been a big Ingmar Bergman fan.  Which may make you wonder why I was so eager to see Through a Glass Darkly, the stage adaptation of Bergman’s 1961 Oscar-winning film that the Atlantic Theater Company recently opened at New York Theatre Workshop.  Easy answer: Carey Mulligan.
I can’t remember being more knocked out by an actor than I was when I saw Mulligan in The Seagull back in 2008. That production transferred to Broadway from London because of Kristin Scott Thomas’ movie-powered name recognition and much-lauded performance as the self-involved actress Arkadina. But Mulligan stole the show with a portrayal of the fledgling actress Nina that deftly captured both the fragility and tenacity of the character (click here to read my review).
Hollywood was gobsmacked too and swept Mulligan right up. I’ve since seen several of her subsequent movies—"An Education," "Public Enemies,"  "Wall Street: Money Never Sleeps,"  "Never Let Me Go"—and she’s been good in them too. But there is a more visceral quality to Mulligan’s stage work that makes you believe that this young actress, who just turned 26, has got the chops to become her generation’s Meryl Streep.  Or Judi Dench. (Click here to read an interview with her.)
Mulligan’s portrayal of Karin, the young woman in Through A Glass Darkly who is trying to fight off mental illness, lived up to my expectations.  And that made the theater lover in me happy.  The play fulfilled my expectations about Bergman too.  Which made me less so.
Through a Glass Darkly is set in a vacation house on an island off the coast of Sweden where Karin is vacationing with the three men in her life: her protective husband, her narcissistic father and her immature younger brother. The action centers around the men's efforts to keep Karin well but the battles are mainly interior ones, as all the characters wrestle with the idealistic images of the people they want to be and the cruel realities of who they actually are.
Internal struggles can be hard to show on a stage and Jenny Worton, who did the adaptation, and David Leveaux, who directed the production, seem stymied about how to make it work. The result is a play that seems far longer than its 90-minutes running time.
I must confess that although I usually try to do my homework before seeing a show, I haven’t seen the film. Yet the play still seems like one of those bloodless musical remakes of movies where the characters are the same, the scenes are similar but the spirit is AWOL. As a consequence, the actors, with the exception of Mulligan, struggle too. They act the qualities of their characters instead of the people who inhabit them.
The rest of the creative team seems adrift too. Jess Goldstein's costumes are a mishmash of time periods. And Takeshi Kata has just as hard a time with the set, which is divided into the outside and inside of the family’s beach house. It’s beautiful to look at but parts of the set seemed misplaced (why is the sand dune inside?  why does the attic room seem outside?) and if, like my husband K and I, you’re sitting on the aisle, it can be hard to see what happens on the other side of the stage. Only David Van Tieghem’s sound design hits the spot, conveying the bewildering terror of the madness closing in around Karin.
Mulligan slices through all the murkiness. There is a crystalline precision to her performance as she works through all the stages—giddiness, despair, terror and resignation—of a mind unraveling. It’s hard to take your eyes off her and yet painful to watch. Which, in the end, turned out to be enough for me. But I can’t guarantee that non-Mulligan groupies will feel the same way.

Labels: Through a Glass Darkly

I was blown away by Mulligan in the Seagull too. I had come to the conclusion that Nina's big "I was the seagull" speech was unplayable (for example, Natalie Pullman did a wretched job on it in the Park). But when Mulligan did it, it worked! In fact, it was heartbreaking.

Hey Wendy, I'm an avid reader and big admirer of your reviews on Show Showdown (folks who don't know the site can find it here: http://showshowdown.blogspot.com/) and so I'm really thrilled that you'd take the time to leave a comment and delighted that we share an appreciation of the magnificent Mulligan.