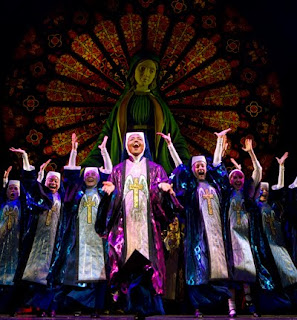 The Tony Awards are just a week away but so many shows opened at the end of the season that I'm way behind in posting about all the ones that are eligible for awards.  I’ll still try to get to some of them later but, right now, I want to give a little love to a show that probably won’t hear its name called a lot next Sunday evening: Sister Act.

It doesn’t have the eye-popping costumes and sets that Wicked does or the familiar sing-along tunes that Mamma Mia! does but, like them, Sister Act is a feel-good show. However you might not be able to tell that from some of the griping reviews (click here to see a round-up of them).

They used to say that shows like Sister Act were for the tired businessman.  Now, they say they’re for the tourists. Both are meant as put-downs.  And I don’t know why. Tourists and business people, tired and otherwise, pay their money just like everyone else (except of course most critics—including me) and they deserve to be entertained too.

Not every show has to be profound or break new ground.  Not every theatergoer wants them to be.  Sometimes, just singing, dancing and a few harmless jokes are exactly what hit the spot.

Sister Act is based on the 1992 movie about a so-so nightclub singer who’s named herself Deloris Van Cartier and has ambitions far beyond her talent. After Deloris witnesses her gangster boyfriend commit a murder, she hides in a convent that is home to a no-nonsense Mother Superior and a pitiful-sounding choir. The eventual outcome is totally predictable.  But that doesn’t mean that getting there can’t be fun.
The movie starred Whoopi Goldberg, who, along with Disney, is a name-above-the-title producer for the stage version. Goldberg has also been the show’s main cheerleader: stepping in for a short time as the Mother Superior during the show’s earlier run in London, talking it up in countless interviews, inviting it to perform on her daytime TV show “The View,” and steadily pushing for changes that would make an already energetic show even more exhilarating.
Unlike the movie, which playfully transformed pop songs into gospel numbers for the nuns to sing ("My Guy" becoming “My God,”) the stage show has all original music. Alan Menken supplies the hummable ‘70s-era soul and disco tunes (click here to read an essay he wrote on the making of the score) and Glenn Slater does the trying-too-hard-to-be-clever lyrics (click here to read a Q&A with him).
Book writers Cheri and Bill Steinkellner (with a later assist from Douglas Carter Beane) have also added a cute love story between Deloris and the cop (a winning Chester Gregory) who has placed her in the convent until she can testify. But the rest of the show hews closely to the movie.
Sarah Bolt conveys a geniality similar to that of Kathy Najimy, who, in the film, played the chubby and cheerful nun who becomes Deloris’ best pal.  Meanwhile Audrie Neenan does a nice variation on the older wisecracking sister that the always-wry Mary Wickes played, plus Neenan raps.
The inimitable Maggie Smith played the Mother Superior in the movie but Victoria Clark brings her own charms to the role, elevating the show to another level whenever she sings. So much so that Menken and Slater added a second-act ballad for her that wasn’t in the London production.
Still, the show has to center around Deloris. Patina Miller, who was originally in the ensemble but moved up to the title role during the London previews, isn’t as effortlessly charismatic as Goldberg but she proves a spunky spoke around whom the show joyfully revolves. And she works her heart out (click here to read an interview with Miller).
In fact everyone does. There isn’t a lot that can be done with a nun’s habit but costume designer Lez Brotherston has come up with just about every funny option imaginable (I think my favorite might be the ones with the glitter-gold crosses) and Klara Zieglerova has been just as wittily audacious with the set, which at one point features a statue of the Madonna as a disco ball.
Anthony van Laast’s choreography may not be all that original but it is spirited. And Broadway vet Jerry Zaks (someone with whom my husband K has worked and remains fond of) deftly pulls the whole thing together. In the end, that whole is entertainingly larger than the sum of its parts.
Now, Sister Act isn’t a show for the ages. But theatergoers too prudish for The Book of Mormon or too straight for Priscilla Queen of the Desert will have a great time.  And getting into the act will be the Obama supporters who will pay up to $10,000 a seat for a performance that Goldberg will host on June 23.