Why "Jerusalem" is Worth a Pilgrimage 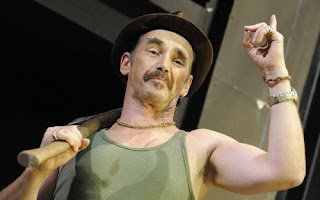 Even before he made his American debut in Boeing-Boeing two seasons ago, Mark Rylance was celebrated in a long New Yorker profile (click here to read it).  He went on to win a Tony for that performance and the critics also went gaga last fall over his portrayal of the buffoonish Valere in La Bête.  But I didn’t get what the fuss was all about (click here to see my review).  That, however, was before I saw Rylance in Jerusalem, the brilliant new play that is currently scheduled to run at The Music Box through July 24.
Jerusalem got six Tony nominations this week, tying with The Motherf**ker with the Hat for the most awarded to a straight play. Both Rylance and Jerusalem are frontrunners in their categories. But however the awards play out Rylance’s bravura performance is one that theater lovers will be talking about for years to come. I don’t say this often: you gotta see it.
Rylance plays Rooster, a banged up and washed out former daredevil who lives in a dilapidated old camper van that he’s parked in the woods, sells drugs to the local teens and throws wild parties that annoy the folks who live in a nearby subdivision.  Understandably, they want him evicted.
Rooster is flagrantly uncouth.  Ten minutes into the play he’s uttered the c-word (which now that the f-word is considered title fodder has become Broadway’s favorite new way to transgress; the c-epithet makes an appearance in at least two other shows this season). But Rooster is also
a charmer and a weaver of improbable tales so tall they soar to the level
of the mythic.
Many critics have described the character as Falstaffian.  And Rylance, who spent a decade as artistic director of Shakespeare’s Globe in London, knows the territory and throws himself into the role with such abandon that (1) you cannot imagine anyone else playing Rooster (in fact, I suspect that actors who take on the role in the future will be haunted by him the way that generations of Stanley Kowalskis have been haunted by Marlon Brando) and (2) you cannot imagine how he has the physical and emotional stamina to play the part eight times a week (click here to read his take on the role).
There’s no slack in the supporting cast either. Mackenzie Crook, familiar to fans of the British version of “The Office,” deservedly got one of the show’s Tony nods for his performance as Rooster’s main sidekick Ginger.  But everyone—and I do mean everyone, including John Gallagher, Jr., despite an on-and-off again British accent—is doing award-worthy work. Still, I really do have to single out Alan David as a drug-addled old professor.
In the end, though, at least for me, it’s the play that’s the truly great thing here. Playwright Jez Butterworth reportedly had doubts about this one.  But he has crafted a masterwork that satisfies on multiple levels.

Jerusalem is a terrific comedy and watching Rooster and the gang is a hoot. It’s also a searing domestic drama about lost souls pushed to the margins of society. And, without being overly pedantic, it is a smart allegory about the struggle—royal wedding aside—to define the contemporary British character.
Butterworth has purposefully set the action on St. George’s Day, the celebration of a time when the English slayed dragons, or believe they did. He’s given Rooster the full name Johnny Byron, summoning up images of one of the most romantic periods of the old Empire. And he’s called his play Jerusalem, a direct reference to the beloved hymn that idealizes Britain as a heaven on earth and that opens the play. (Click here to read an editorial about the play in London’s The Observer).
That’s a lot of baggage for one play to carry but director Ian Rickson balances it all beautifully.  And he’s assembled a crack design team, most notably the uni-monikered Ultz, who earned a Tony nomination for a set that deftly walks the line between the realistic and the expressionistic; and lighting designer Mimi Jordan Sherin, who has lit it to perfection and also picked up a Tony nod in the process.
They’ve all combined their talents to create what is the best play of the season, lead by Rylance who has now become the actor I'll be happy to see in any season.

Jerusalem was funny and Mark Rylance was terrific but this play just did not speak to me.

I thought it was too long and I wasn't sure of Jez Butterworth's point. Is Rooster a blot on Britain's "green and pleasant land" or is he the authentic Englishman that soulless modern Britain is determined to stamp out?

But I know I'm in the minority on this one and that's ok. Part of going to the theatre more is figuring out what I like and what I don't like - and why.

Hey Esther, you pose an interesting question. I certainly can't speak for Butterworth but I think Rooster can be both, a blot on the image that modern-day England wants to have of itself and a vital link to its past. I think we sometimes believe that authenticity and nobility are synonymous but I don't think they need be.

However I totally agree with you that it's OK for you not to like this one. I just had dinner last night with another friend—a professional in the theater business—who feels the same way that you do. Luckily—particularly this season—there's enough good stuff around to satisfy all of us.

Thanks for taking the time to leave such a thoughtful comment. Cheers, jan