"The Other Place" Is A Tough Place for Women 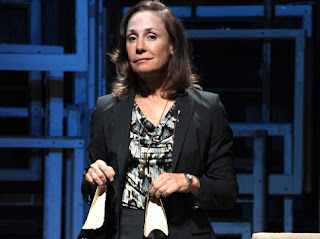 Unlike the movies or TV, the theater prides itself on being an art form that is supportive of women, including what people like to call “women of a certain age.”  Even younger male playwrights seem comfortable writing parts for women in their 50s and 60s. But, as my mother used to say, you’ve got to be careful what you wish for.  Cause the women in these plays often tend to be obsessed with their careers and childless or unfeeling towards the poor children they do have.  In other words, they’re bitches.
The latest one is Juliana Smithton, the scientist who heads up her own biotech firm in the drama The Other Place that opened last week in an MCC Theater production at the Lucille Lortel Theatre.

Like the poetry scholar in Margaret Edson’s Pulitzer Prize-winning Wit, the musicologist in Moisés Kaufman’s 33 Variations, and the construction company exec in Adam Bock’s A Small Fire, Juliana is struck with a devastating illness that reduces her to a child-like state and forces her to give up her sense of control, regret her past ways and learn to depend on other people.
I was terribly moved by this transformative story when I saw Wit back in 1998. And I enjoyed both 33 Variations and A Small Fire.  But now, I’m beginning to wonder if playwrights are pissed off at us Baby Boom women (click here to read about how the same trend is showing up in British theater). Would they be creating nicer roles—or at least more varied ones— for older women if more of us had stayed home, had plenty of babies and been around to serve milk and cookies after school?
Thinking about those questions may have biased my feelings about The Other Place.  Most of the critics loved it (click here to read some of their raves). But I had other problems with the play too.
Its playwright Sharr White is 40 and has been writing plays for the past 15 years but admits that he adopted a more commercial formula for this one. And it's apparently worked because The Other Place is his New York debut (click here to read a profile about him).
White has constructed the play as a mystery with pressing questions of its own: why is Juliana's marriage in trouble? why is she estranged from her daughter? why is she having trouble with her memory? why is she obsessed with a girl in a yellow bikini?  why is she so attached to the beach house, the other place of the title that she never visits?
But instead of letting the story and the clues unfold naturally, White tries to pump up the suspense by jumbling the scenes so that they appear out of order. He also relies heavily on having Juliana narrate the proceedings in direct addresses to the audience and comes up with a contrived ending.
It helps that Juliana is played with ferocious intensity by Laurie Metcalf. But not enough. The character has to be angry at and mean to so many people—her husband, her doctor, her former lab assistant—that it’s hard for someone even as munificently talented as Metcalf to find different ways to express Juliana’s discontent.
The other three actors in the cast are given too much or too little to do.  Dennis Boutsikaris gets off best as Juliana’s long-suffering husband.  But poor Aya Cash has to play three different women.  She works hard to make each of them distinctive but I still got confused. Meanwhile, John Schiappa is given so little to do that his part could have been cut and the money used to hire another female actor to help Cash out.
There was a talkback after the performance my theatergoing buddy Bill and I attended.  But although the show lasted just 80 minutes, we skipped it (even though Bill did think I was being overly sensitive about the older woman thing) and headed down the street for a far more enjoyable dinner at the delicious iSodi.  On the way out of the theater, we passed posters of previous MCC hits. Prominently among them was Wit.

This is a poorly written and ridiculous review.

Blogging is the death of criticism.

Anonymous, I'm sorry that you didn't enjoy the review but I wish you'd said a little about what so pissed you off. Also, it hardly seems a fair critique to dismiss all blogging just because you don't like mine. Still, feel free to leave more comments—positive or negative—in the future. Albest, jan

Poor Aya had to play three parts? That was the point...all the women are jumbled in Juliana's mind. The scenes were out of order? No they weren't. Some were in her mind and therefore not real (in case you couldn't figure that out) and others really were happening. There was a flashback scene...did that confuse you? And the tone of the play changes...And yes, she's speaking to the audience because she LECTURES for a living and so Mr White used that convention to have Julianna break the fourth wall. Different plays use different conventions. Or is that confusing too? You must have had a hard time with SKIN OF OUR TEETH and
OUR TOWN. All those people talking to the audience....whew

Anonymous, thanks for coming back. I'll grant that it made sense for the same actor to play the daughter and the woman in the beach house, but having her play the doctor seemed influenced more by money than dramaturgy. And yes, I did get that many of the scenes were set inside Juliana's mind but I still think there was unnecessary jumbling, done more to artificially pump up the mystery than to satisfy the demands of the storytelling (that's an opinion; it worked for you but not for me). And yes, I also got that she was delivering a lecture, which allowed the character to break the fourth wall; but it seemed to me that the playwright used the lecture conceit because it was easier to tell the audience the information than to dramatize it. Finally, thanks for the reminder that different plays use different conventions (I happen to be a big Our Town fan) but the fact remains that sometimes the conventions work and sometimes they don't.