"Anything Goes" Is Worth Your Going to See 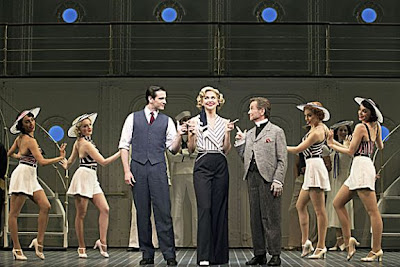 If Broadway were a high school, Sutton Foster would be a shoo-in for class sweetheart.  She’s not a beauty but there’s an endearing quality about her gawkiness.  She’s multi-talented but she isn’t a show-off. She works hard and she’s fun to be around. All those attributes are on vivid display in the Roundabout Theatre Company’s hit revival of Anything Goes, which has already extended its run at the Stephen Sondheim Theatre through next January.
First performed in 1934, Anything Goes is more a revue than a real musical. The book is there mainly to set up the song and dance numbers.  But that’s fine in this case because the music is by the sublime Cole Porter and this score is a greatest hits collection that includes “I Get a Kick Out of You,” “You’re the Top,” “All Through the Night” and, of course, “Anything Goes,” along with “It’s De-lovely,” and “Easy to Love,” which were added in later productions. (Click here for a piece about all its cast recordings.)
The lyrics to some of the songs may be woefully outdated (click here to see a New York Times visual glossary to the references in “You’re The Top") but Porter’s music is so irresistibly intoxicating that people in the audience at the performance my husband K and I attended started nodding their heads, patting their hands and tapping their feet as soon as the orchestra started playing the overture. Everyone had grins on their faces.  Me too.
P.G. Wodehouse and Guy Bolton’s book, which was rewritten by Howard Lindsay and Russel Crouse and later revised by Crouse’s son Timothy and his college buddy, the frequent Sondheim collaborator John Weidman, deals with the varied romances and other goings-on aboard a London-bound ocean liner.
The passenger list includes a young engaged debutante, the stowaway who is her true love, a bibulous old Yalie, an eccentric English lord, a mobster masquerading as a minister, his licentious moll, two Chinese missionaries (so stereotypical that it’s a shame they haven’t been revised right out of the book) and a nightclub entertainer named Reno Sweeney.
Foster plays Reno, the role originated by Ethel Merman and later reinvigorated by Patti LuPone in Lincoln Center’s much-acclaimed 1987 revival. As the Merman and LuPone castings suggest, Reno’s a brassy broad, probably based on the Prohibition-era speakeasy owner Texas Guinan whose trademark greeting to her patrons was “Hello, suckers.”
More perky than brassy, Foster wouldn’t seem a natural choice for the role. But, pulling out all the stops, she remakes it in her own image. Her Reno is everyone's best friend. Director Kathleen Marshall helps out by turning many of the songs into dance numbers that showcase Foster’s agile footwork.
In fact, Marshall’s choreography may be my favorite of the many dance routines I’ve seen over the past few weeks as I’ve been making my way through this season’s many musicals.  Unlike so many of the others, Marshall doesn’t try too hard.  Unabashedly channeling Busby Berkeley and Fred Astaire, her dances transport us to a time when people—or at least people in shows—just danced their troubles away.
Martin Pakledinaz’s costumes are swell too.  The women wear gowns to-die-for and all the guys look dapper. They do it against a terrific shipboard set that Peter Kaczorowski created and lit himself.
And Anything Goes offers lots of chances for actors to shine.  Colin Donnell and Laura Osnes look and sound just like the show’s lovebirds should.  Adam Godley is a hoot as the British fop of a fiancé and John McMartin makes a lovable lush.
The only one who didn’t quite work for me was Joel Grey.  He’s too pixyish to be believable as a mobster, even one in disguise.  But Grey comes with so much goodwill from his past triumphs and, at 79, is still so game that I was more than willing to just sit back and watch him enjoy himself.
In fact, I felt that way about the entire show. Cause like its star, this production of Anything Goes is a real sweetheart.

Actually she does "show off" if you saw Sutton Foster in Drowsy Chaperone. In the Anything Goes performance we were at I thought I saw a slight "you can't do this" smirk as she did the splits in act 2. Not only is it worth seeing once, I am going back to see it again.

You have a point, David. There is often a twinkle in her eye when she's about to pull off a feat. I'm glad you got to see the ones in Anything Goes and hope you enjoy them just as much when you go back. In the meantime, many thanks for leaving the comment and I hope you'll leave more in the future. jan