The Motherf**ker with the Hat is Frickin’ Good 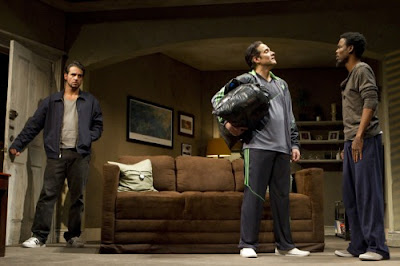 My husband K and I were having dinner at Orso after seeing the new Stephen Adly Guirgis play when a silver-haired couple walked by, spotted our Playbill lying face down on the table and asked what we’d seen.  I smiled, took a deep breath and told them: The Motherfucker with the Hat.
It turned out to be a conversation stopper.
Which is too bad because the show, which opened on Monday night at the Gerald Schoenfeld Theatre, deserves to be talked about. The problem, of course, is how to do that without sounding like a refugee from the equally foul-mouthed but more amiably-titled The Book of Mormon.
The show’s producers have tried to get around the name thing by referring to it on the Playbill, in ads, and on the marquee as The Motherf**ker with the Hat, which is kind of like when the singer Prince changed his name to an unpronounceable symbol, which forced people to refer to him as The Artist Formerly Known as Prince.  Similarly, people have taken to saying “the new Guirgis play,” or “Hat” or “the Chris Rock show” because the comedian is making his Broadway debut in it.
But there’s so much more to say. For starters, I'm going to say that The Motherf**ker with the Hat may be the most entertaining show I've seen this entire season.

It's a romantic comedy, hard-core style. One of its star-crossed lovers is Jackie, a drug addict with anger-management issues who has just gotten out of jail, is struggling to stay clean, and is crazy in-love with his childhood sweetheart.
The object of his affection is Veronica, who loves Jackie just as much but not enough to give up her own more-than-recreational drug use—or other men. The play centers around what happens when Jackie discovers some suspicious male headwear in the apartment they share and sets out to find the man he thinks Veronica is two-timing him with.
Guirgis likes to create oddball characters with street pedigrees and he’s a master of fast, funny and profanity-laden dialogue. His characters sound like the ADD love children of David Mamet and Aaron Sorkin. Casting is clearly key. And Guirgis couldn't have found better actors for his leads.
Bobby Cannavale, always a treat to see, is giving his best performance ever.  His Jackie is a believably complex guy: sweet and scary, sincere and silly all at the same time. And Cannavale is evenly matched by Elizabeth Rodriguez, a longtime member of the LAByrinth Theater Company, where Guirgis is co-artistic director.
Rodriguez plays Veronica with a go-for-broke intensity that is, at times, almost frighteningly real and yet totally relatable.  The two college-aged women in the seat next to me literally gasped at some of the words coming out of her mouth but kept nodding in solidarity at what she said.
Of course, many of the people in the audience—a much more diverse group than usually turns out for a straight play on Broadway—are there to see Rock. He plays Jackie’s AA sponsor Frank and although Rock is no where near as accomplished as Cannavale and Rodriguez, the comedian doesn’t embarrass himself but takes advantage of the similarities between his stand-up personae and the smart-talking character he plays.
Still, both Rock and Annabella Sciorra, who’s also making her Broadway debut as Frank’s wife, seem a little insecure onstage. On the way to the restaurant, K and I debated which stage vets we thought might have matched Cannavale and Rodriguez in those roles. On the other hand, it's hard to imagine who could do better than Yul Vázquez, who is a hoot as Jackie’s devoted cousin Julio.
Anne D. Shapiro, who won a Tony for directing August: Osage County back in 2007, does an admirable job of camouflaging the experience gap between her actors and she keeps the action at a suitably high pitch.
Shapiro is supported by a crackerjack design team, particularly Todd Rosenthal who has put together a clever set that transforms right before the audiences’ eyes into three different apartments with amusingly distinct touches (check out the bathroom door in Julio's home). Jazzman Terrence Blanchard supplies the effective underscore.  (Click here to read a story about how the production came together.)
Last Friday, the New York Post columnist Michael Riedel wrote a really mean-spirited piece about the show (click here to read the crow-eating apology he posted the day after the rave reviews came in). The badmouthing had gotten around.  K and I ran into a friend on the way to the theater and he shook his head sadly when we told him what we were going to see. “I hear that’s not going to last,” he said. It would be a shame if it doesn’t. Because although The Motherf**ker with the Hat is not a particularly deep play, it is pardon my French, a frickin’ enjoyable one.

Labels: The Motherf**ker with the Hat