"The Book of Mormon": A Non-Convert's View 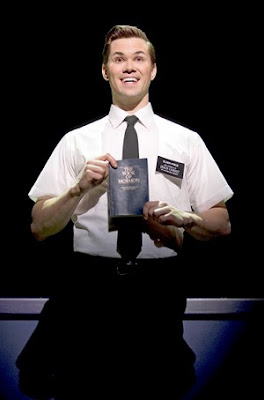 If you love meta musicals—and judging by the ecstatic reviews the show has gotten, a whole lot of people do—you’re going to love The Book of Mormon, which opened at the Eugene O’Neill Theatre last week.  You'll enjoy it even more if you have a fondness for potty-mouthed humor and pop cultural references.

For The Book of Mormon is written by Trey Parker and Matt Stone, the guys who created “South Park,” the animated Comedy Central series with the fat little kids who do and say scatological things; along with Robert Lopez, one of the creators of the Tony-winning puppet musical Avenue Q.

The Book of Mormon is just as irreverent and self-consciously ironic as its creators’ other shows. And it's become the hip show to see. Sting was sitting across the aisle from my friend Jessie and me at the performance we attended.
But what really has theater folks cheering is that The Book of Mormon is a classic book musical in the Rodgers & Hammerstein tradition, complete with ballads and novelty songs, tap dancing chorus boys, sight gags and a message about how people from different cultures can find a way to get along together.
I love all that stuff too. And I understand the excitement over an original musical that isn’t based on a movie or TV show—not to mention one that's bringing in the young and male audiences that Broadway craves. So why, you might ask, aren’t I grabbing a shovel to heap even more praise on The Book of Mormon?

Well, I’ve got my reasons. First off—and I know I’m in a shrinking minority—I don’t love meta musicals. Or at least I’m tired of shows that send-up the musical genre by satirizing other musicals.
Not only is the music in The Book of Mormon a pastiche of familiar Broadway styles but the book is a collage of parodied scenes from other shows. You can spot “homages” to The King and I, Bye Bye Birdie, Wicked, Agnes De Mille’s dream ballets, and, as if poor Julie Taymor weren't already eating enough dung, The Lion King is skewered at least three times.
It also always strikes me as childish or cheesy (or both) when a show continually draws laughs just by having its characters say profane words. Sure, I'll admit I laughed. But I don't know if the show would be half as funny without the crude language.

The dialog and lyrics of The Book of Mormon is so littered with f-bombs, d-jokes, c-words, and s-variations that it’s going to be a real challenge for the producers to find a clean-enough number for the Tony broadcast in June, where the show is already predicted to be a big winner.
And, despite its much-ballyhooed benevolence, I’m also uneasy with the show’s treatment of gay people and black people. Stone and Parker, who call themselves libertarians, have always gotten away with a lot of things that would usually turn off most liberals because they bubble-wrap them with funny jokes and cool pop cultural references (click here to read an interview with them).

"Being gay is bad, but lying is worse,” goes one Book of Mormon lyric. “So just realize you've got a curable curse!"  When Richard Rodgers and Oscar Hammerstein preached tolerance, you knew they meant it.  With Stone and Parker, it could be just another joke.
The biggest laughs come at the expense of the Mormon Church in particular, organized religion in general.  So beware, or be prepared to squirm in you seat, if you’re devout. Although Jessie said she would have enjoyed the show even more if it had been meaner. Which, I suppose, is how other true "South Park" believers might feel.
The Book of Mormon tells the story of two young Mormon missionaries who are sent to a small village in Uganda to convert the people there.  They are the usual odd couple—in this case, a golden-haired Mormon poster boy who would rather be in Orlando and an overweight outcast who just wants people to like him.
The Ugandans they encounter are plagued by poverty, AIDS, and an evil warlord who forcibly subjects women to female circumcisions. But despite all their woes, the villagers are good-hearted if simple-minded (one keeps referring to an old battered typewriter as her “texting machine”) and dubious about religion. The musical tells the tale of the missionaries’ campaign to win them over, with the help of Frodo, Yoda and Darth Vader.
Whatever reservations I may have about the show itself, I’ve none about the production.  Parker and Casey Nicholaw are listed as co-directors and they keep everything popping along. Nearly every one of Nicholaw’s dance numbers is a show-stopper. Scott Pask’s set and Ann Roth’s costumes  pull off the neat trick of being simultaneously cartoonish and believable.  But the real MVP on the design team is lighting designer Brian MacDevitt, who never loses focus amidst all the frenzy.
The cast is first-rate too.  Andrew Rannells and Josh Gad (click here to read an interview with him) are pitch-perfect as the mismatched missionaries.  Michael Potts brings a wry bemusement to the village elder and Nikki M. James is thoroughly enchanting as his daughter.
I wish them all well.  And I hope you, too, have a good time if you can get a ticket to see them.  As for me, I think I'll worship elsewhere.

You're not alone. I also laughed some, and liked the cast, but always felt the show was keeping itself at arm's length from me, emotionally. And did we need three big dance numbers in the first 20 minutes?

I appreciate your comments about the show. I felt a little like this was The Producers all over again - undoubtedly a good show, with a top notch cast, but it wasn't the "Greatest Show Ever Written!!!!!!".
Perhaps, I'd had too many friends on Facebook fawning and gushing about it, so my expectations were too high. I certainly did laugh, but I didn't even find it as subversive as South Park. I have certainly gasped in shock at some of the things they get away with on that animated series, but I agree with Jessie - it could have gone meaner.
I still sit and wonder what I was missing. I like potty-humor as much as the next guy (South Park/Family Guy, etc). But the show didn't seem as smart as the those tv series.
I applaud your bravery in going against the grain on this one. After expressing my opinion and being looked at like a 3-headed Philistine, I've decided I'm in a tiny minority, and its best to nod and smile when it comes to talking about the show. It WAS a good show, and I do wish them well and long success. It just didn't convert me.

I won't skewer someone for not liking a show that I liked. I'll just say it was funny, it was entertaining, it was irreverent. BUT, I wasn't looking to be moved emotionally. Given their TV show, it appears clear to me that the "Turn it off" song was a parody of those who think that one can turn off ones sexual preferences, not simply "another joke". These guys bring up topics, similar to the way Jon Stewart does, to point out the absurd nature of people who say absurd and/or misguided things, not to applaud them. "I Believe" points out how the Mormon Church's G-d "changed his mind about black people" in 1978. Get it?

I think I did "get it." I just didn't think it was as funny as you did. But I'm glad that you enjoyed it. And I'm even more delighted that you took the time to leave a comment saying that you did.