"This Is Our Youth" Seems Kind of Old 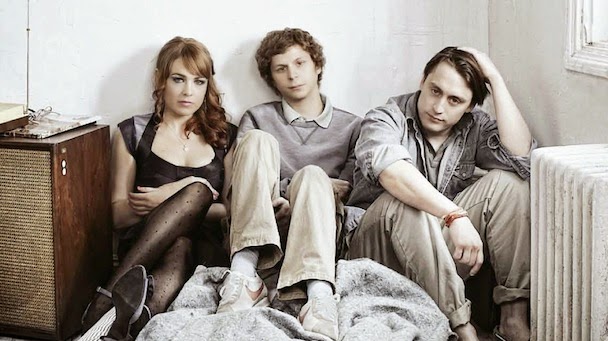 The four young men sitting in the row in front of my husband K and me were exactly the dream demographic the producers must have had in mind when they decided to do a revival of Kenneth Lonergan’s This Is Our Youth and cast it with the Millennial Generation icons Michael Cera (of the cult movies “Superbad” and “Juno”) Kieran Culkin (of a bunch of cool indies and the acting clan whose most famous member, at least until now, is “Home Alone’s” Macaulay Culkin) and Tavi Gevinson (the 18-year-old wunderkind fashion blogger and editor-in-chief of the online teen magazine “Rookie”—click here to read more about her).

And the play, which is running at the Cort Theatre through Jan. 4, apparently scored with our preppy fellow audience members, who, with their navy blazers, shawl-collared sweaters and carefully-tousled hair, might have been fugitives from a Ralph Lauren ad or the better behaved classmates of the characters in Lonergan’s dramedy about Reagan-era rich kids obsessed with sex, drugs and the lack of control from their clueless parents. But it fared less well with K and me.
Our somewhat muted response was certainly not the fault of the cast, who, despite their relative lack of theater experience, were terrific, especially the guys. Cera employs the awkward-but-endearing mannerisms that have become his trademark but he makes an impressive stage debut, seeming as comfortable on the boards as he is onscreen.

Culkin, who has more stage credits, won an Obie back in 2005 for his performance as the survivor of a shooting tragedy in After Ashley but he is even better in this play’s flashiest role. Gevinson may not be quite up to her cast mates but she’s also much younger and less experienced than they are and her winsome performance is nothing for her to be embarrassed about.

Nor can I shake a disapproving finger at director Anna D. Shapiro (who just last week was named the new artistic director of Chicago’s Steppenwolf Theatre Company). Shapiro keeps the action focused and the energy high (although I hated the haranguing incidental music by Rostam Batmanglij from the indie-pop band Vampire Weekend) but her direction also mines the play's undercurrent of melancholy (click here to read about how she did it).

So why was I so lukewarm about the overall production?  Well, I’m not sure. It could be that I’m just not a Lonergan gal.

I missed the original 1996 production of This Is Our Youth that made a star of Mark Ruffalo and an-easier-to-get-a-job name out of Josh Hamilton. And I was somewhat mystified by the praise that greeted Lonergan’s Lobby Hero but completely in sync with the disapproving reception for his Medieval Play which debuted at Signature Theatre two years ago (click here to ready my review).
The problem could also be that I have a high bar for plays about the 1%. This Is Our Youth is centered around Warren (Cera) a rich kid who steals $15,000 from his wealthy dad after the old man has kicked him out of the house, and Dennis (Culkin), a low-level drug dealer who is also the son of a famous painter. Gevinson plays Jessica, an equally privileged young woman who has been set up on a date with Warren.

The play unfolds over a 12-hour period in which the guys indulge in emotional and physical one-upmanship, Warren and Jessica joust over whether they can have a relationship and Warren and Dennis try to figure out how to replace the money that Warren has taken from his dad.

But, as one of the characters admits, these are rebels with safety nets, cushioned by family wealth and status. And although, there’s a whole lot of yelling and running around in the first act, I found myself drifting off.

And it apparently wasn’t just me. I saw a gray-haired couple fleeing toward the exit during the intermission. But they might—as K and I did—have felt somewhat differently if they had stayed. Lonergan reveals his purpose in the second act of this two-hour-and-twenty-minute play, even if he also mars it with two monologs that spell out his intent a bit too clearly.
I can imagine how daring all this youthful disaffection must have seemed back in the Morning-in-America era of the ‘80s but a play about rich kids whose parents focus more on their own personal satisfaction than on that of their kids seems off in this era when helicopter parents are hovering everywhere and many kids now include their moms and dads high on the list of their best friends.

Or maybe, unlike the preppy foursome who sat in front of me, I'm just the wrong demographic for this show.

Labels: This Is Our Youth