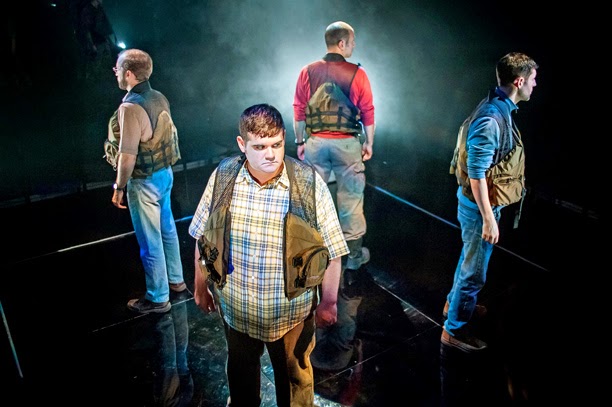 Like the flashier Elevator Repair Service, the Godlight Theatre Company specializes in adapting literary works for the stage. But instead of putting on the word-for-word text as ERS likes to do (as with Gatz, its eight-hour rendition of “The Great Gatsby”) the Godlight folks tend toward stylized dramas. Their latest is Deliverance, a 90-minute adaptation of the James Dickey novel that is playing at the 59E59 Theatres through Nov. 9.

I'll admit that I was wary when my friend Jessie and I entered the small black box space on the third floor at 59E59 to see a recent Saturday matinee of the show. I’d seen Godlight’s production of In the Heat of the Night, which although earnestly performed didn’t make the case for its page-to-screen-to stage conversion (click here for my review of it).
And, of course, I’d seen the now-classic 1972 movie version of "Deliverance," in which four suburban guys get more than they bargained for when they take a river-rafting trip through rural Georgia and encounter a couple of malicious locals. I couldn’t imagine the story being done on a stage. At the very least, wouldn’t they need a river?

Turns out they didn’t; a shiny black floor stands in for the water. There’s no banjo music either, as there famously was in the film, although someone does play guitar.

There aren't even props. The actors mime them. Which, frankly, looks silly at the beginning of the play when the men are planning their trip and waving around imaginary cocktails. But it becomes surprisingly effective, almost poetic, when the the river journey gets underway and everything the men do becomes a metaphor.

The infamous scene in which one of the rafters is forcibly sodomized is there (and poignantly played) as are the subsequent crimes it sets off and the overall theme of how far a man will go to survive.
And the narrative's tension, thanks to the taut direction of Godlight’s artistic director Joe Tantalo and the moody sound and lighting of his design team, is there too. I knew how the story was going to work out
and yet there were moments when I was on the edge of my seat.

Part of the credit for that also goes to the seven-man cast, who commit themselves to their roles with fierce intensity, made even more impressive by the fact that they perform in the round and within inches of the audience, including an apparently drunk guy in the front row who kept loudly commenting on the action at our performance.
I’m still not sure there’s a need for a stage version of Deliverance but both Jessie and I left convinced that we were glad we'd seen this one.