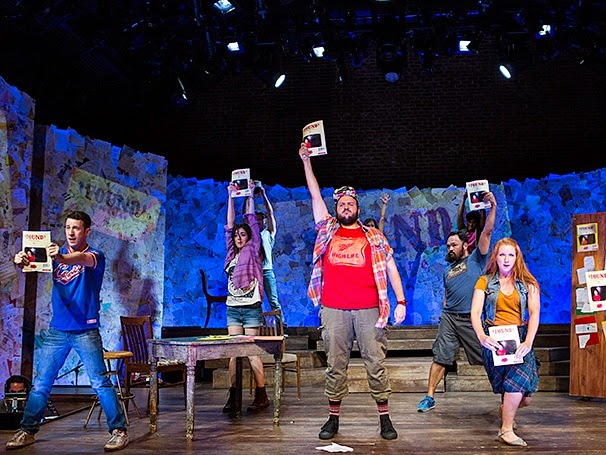 The amiable musical Found, now playing at Atlantic Theater Company’s Linda Gross Theater though Nov. 9, wasn’t made for people like me.

Don’t get me wrong; I had a good enough time but the show’s target audience is people under 40, more specifically those of them who read “n+1” instead of “The New Yorker,” have the “WTF with Mark Maron” podcast on automatic download and barely know Rodgers & Hammerstein from Hammachler Schlemmer.

Found is based loosely on the life of Davy Rothbart, founder of the "Found" magazine and website, which publish discarded letters and other random writings that are funny, touching or otherwise supposedly endearing (click here to read some of them). Think of it as "America's Funniest Home Video for People Who Prefer Words."

In this fictionalized version of his tale, Davy and his roommates (Mikey, the gay pal he’s known since they were six, and Denise, the gal pal on whom he has a secret crush) turn his idea into a media phenomenon that grows into a book, a road show, and a gig on public radio.

The plot, as they say, thickens when Davy meets Kate, a TV exec who dangles the possibility of a reality show, a rich payday and romance. Will Davey go for the big Hollywood bucks or stay true to the DIY concept with his friends back home in Chicago?  Will he end up with Kate or Denise?

The book for the show was put together by Hunter Bell, one of the creators of the metamusical [title of show] and Lee Overtree, artistic director of the children’s theater group Story Pirates. The main conceit is that most of Found’s dialog and nearly all of its lyrics have been taken verbatim from the discarded writings Rothbart has collected over the past decade (click here to read more about the making of the show).

Members of a six-actor Greek chorus regularly pop out to perform excerpts. They’re all terrifically talented. Among them is Danny Pudi, who is best known as the pop-culture geek Abed on the cult comedy series “Community,” but my personal favorite was Orville Mendoza, a small guy with big stage presence and a mean twerk.
The leads deliver too. Nick Blaemire sings well, dances well and has a nerdy sex appeal. And the wonderfully-named Barrett Wilbert Weed, who was the best think in last spring's Heathers: The Musical (click here for my review of that), is great here too. Broadway is bound to kidnap her soon.

Overtree directs them all with madcap flair and some of the show is laugh-out-loud funny. An antic scene about the children’s book hero Johnny Tremain has been thrown in just for the hell of it and sends the cast capering through the audience.

It’s all silly fun but I wish the writers had relied less on fart jokes and the f-word. And so many of the lines fit so snugly into the main storyline that it’s hard not to think that what we’re hearing is a good deal less than verbatim from the found writings.
The music, composed by Eli Bolin, who also serves as music director for Story Pirates, is pop-rock pleasant but generic, although there are a couple of ballads—particularly one called “Stupid Love”—that aren’t bad.

Still, as I said, this isn’t a show for everyone. It certainly wasn’t for the two seventysomething couples sitting in front of me. “I could tell within the first five minutes, that I was going to hate it,” said the alpha female of that group as she marched the others out at intermission.
But judging by their guffaws, the Millennials in the audience at the performance I attended were having a great time. And my blogger pal The Mick over at the Craptacular raved that the show spoke to her “in a language that felt absolutely and utterly authentic to my life...There was no pandering to some idea of the Golden Age of Theater that’s long gone and maybe never really existed at all anyway. (click here to read more of what she had to say).”

So there you have it.  The lines are drawn. And what you think of this show may well hinge on which side of that generation gap you sit.