"Indian Ink" Traces Links to the Elusive Past 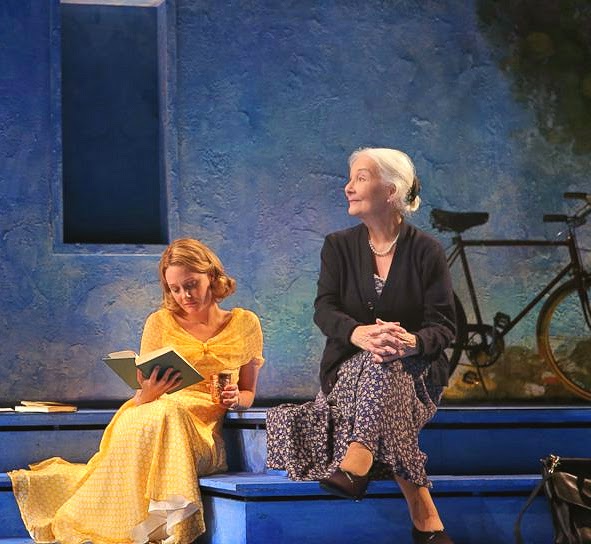 Tom Stoppard has a rep, deserved or not, for writing plays that are brainy but cold-hearted. The wonderful thing about Indian Ink, which the Roundabout Theatre Company is giving an elegant revival at its Laura Pels Theatre, is that it is both intellectually challenging and emotionally rewarding.

In fact, there are so many appealing facets to this play, which originally opened in London in 1995 but is just getting its first major New York production, that I hardly know where to begin talking about it.
Like Stoppard’s more famous play Arcadia, Indian Ink is set in two interrelated time periods and deals with some of this playwright's favorite subjects: love, art and the elusiveness of the past.

It opens in 1930, the same year that Ghandi began his Salt March to protest colonial rule in India, as Flora Crewe, a free-spirited British poet who specializes in erotic verse, arrives in the country and meets Nirad Das, an Indian artist who loves all thing English.
A companion narrative is set in the 1980s, primarily in England, where the sister of the now-late poet is keeping protective watch over Flora’s legacy as an American literary scholar and Das’ Anglicized son attempt to uncover secrets about her life, especially the true nature of her relationship with Das.
During the play's nearly three-hour running time, the narrative flows back and forth between the two eras. The letters Flora composes to her younger sister Nell back home supply the exposition and the connective link, with characters from the past and present occasionally occupying the stage at the same time.

I’ll confess to being more enchanted by the earlier period but I fell for the whole thing. That could be because although Stoppard was born in Czechoslovakia and has spent most of his life in Britain, he also lived in India for several years as a boy and the warmth of this play is infused with the passion he retains for that country on the cusp of change.
Director Carey Perloff has put together a production that captures the magic of that time and place, from the vibrant colors of Neil Patel’s set and Robert Wierzel’s lighting to the subtle behaviors that mark the caste and class differences between the British and the Indians—and amongst the Indians themselves.
The production also benefits from the performances of its leading ladies. Romola Garai, probably best known for the movie “Atonement” and the TV show “The Hour,” plays Flora. Garai seems to specialize in playing women who resist the constraints of society while maintaining the sensuality that draws the very men they’re challenging.
A tall and commanding presence, Garai makes it easy to see why everyone is so enchanted with Flora.  But the poet is also supposed to to be suffering from tuberculosis and Garai is too robust to convey that fragility. She also sounded a little shrill in some early scenes.

Still, Garai's overall performance is one of layered poignancy. She also looks fabulous in the beautiful costumes Candice Donnelly has created for Flora (click here to read more about the actress).
The rightly-revered Rosemary Harris plays Nell, now elderly and called Eleanor. Harris, who is now 87 but looks two decades younger, has lost none of her impressive skills. Her Eleanor is smart, prickly and because Harris, too, spent her girlhood in India where her father was stationed with the Royal Air Force, radiates an aura of authenticity that reflects Eleanor’s own complex feelings about that country.
The men in the show are good too. But it’s really the sum of all the parts that creates the magic. Some critics have found Indian Ink to be too melodramatic and call it second-tier Stoppard. They probably feel that way because it’s more accessible than some of his other plays. But its willingness to be open-heartedness is precisely why this one so works for me.