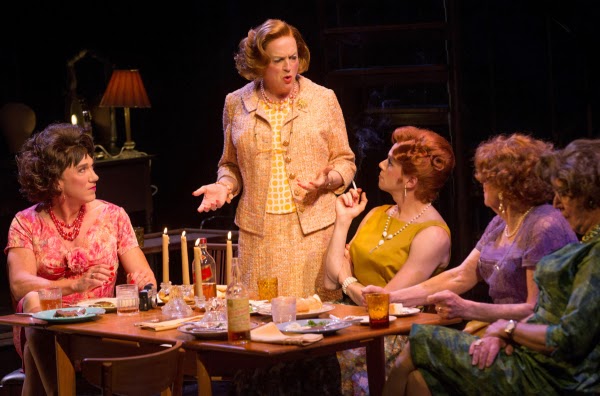 The last time I tried to rally support for an underappreciated show, I failed miserably. Despite my appeal for The Bridges of Madison County (click here to read what I wrote) the show failed to grab a spot on the list of Best Musicals when the Tony nominations were announced last week. Two days later, its producers announced that it will close May 18.

Undaunted, I’m going to wave the flag for another show: Casa Valentina, the new play by Harvey Fierstein that is playing at Manhattan Theatre Club’s Samuel J. Friedman Theatre. For it is one of the most thought-provoking and beautifully rendered productions of this past season.
Casa Valentina tells the stories of a group of men who like to dress as women. Now Broadway has had more than its share of shows with men in drag and Fierstein has been involved with a good number of them (breaking through with Torch Song Trilogy back in 1982, appearing as Edna Turnblad in Hairspray, writing the books for La Cage Aux Folles and Kinky Boots). But his Casa Valentina is different from those others.

Fierstein was inspired by the real-life story of a community of men in the uptight "Mad Men" era who identified as straight and yet found comfort in getting together at a Catskills retreat where they could dress openly in pointy bras, high heels and shirtwaist dresses (click here to read more about the place).
There are laughs (Fierstein is a congenital quipster) but this is a very serious show. Fierstein sets up a number of challenges to the men’s haven: the resort's owners George and Rita, a cross-dressing husband (his female alter ego is the titular Valentina) and his accepting wife, are almost bankrupt; a postal inspector has called George in for questioning about a package filled with illicit photos; and a crusading activist is urging the couple’s guests to come out of the closet.

Before the evening is over, George and Rita’s marriage will be threatened, the guests will be pushed to draw a line between being girly and being gay and the outer, less understanding, world will force its way in.
That's a lot of stuff and, unfortunately, Fierstein isn’t able to juggle all of it as well as one would wish he could and he occasionally resorts to speechifying. A couple more drafts through the word processor might have made for a stronger play. But it’s hard to imagine a better production.

I don’t know how it is possible that none of the awards groups have recognized Joe Mantello for his brilliant direction. From the sensitively choreographed opening sequence in which the men silently put on their makeup and don their wigs and dresses to his steadfast refusal throughout to play anything for just a campy laugh, his work is deft and incisive.
He’s also cast the show impeccably. Reed Birney has deservedly picked up a Tony nomination for playing against the mild-mannered roles in which he usually specializes to portray the ruthless activist who believes that rooting out gays will make it easier for the wider society to accept heterosexual cross dressers.

But I don’t know how the committee overlooked Patrick Page’s portrayal of a man quietly torn between being George and being Valentina (click here to read how the actor shaped his performance). Or Tom McGowan’s wry turn as a rotund, wisecracking military hero with a fondness for housedresses. Or Larry Pine’s poignant rendering of a gun-totting judge with secrets. Or Gabriel Ebert’s as the group’s high-strung newbie (click here to see how they all assumed their dual personae).
And I don’t know how I almost left out Mare Winningham who beautifully portrays a plain woman grateful to be loved by a handsome man and frightened of losing him to a world that she struggles to understand. Thankfully, both the Tony and Outer Critics Circle nominating committees have recognized her work.

Another Tony nomination has gone, also most deservedly, to costume designer Rita Ryack, whose outfits show off each man as the kind of woman he yearns to be without making fun of any of them.
Still, like The Bridges of Madison County, Casa Valentina has been doing only so-so at the box office. Unlike Bridges, it has been nominated for a top-prize Tony and that has goosed ticket sales a bit.

And yet when my theater-savvy college roommate wrote to say she was coming in from California to see some plays, Casa Valentina wasn’t on her list. I wrote back and told her she should see it. I’ve written this post to say you should too.