"The Anthem" Marches to An Oddball Beat 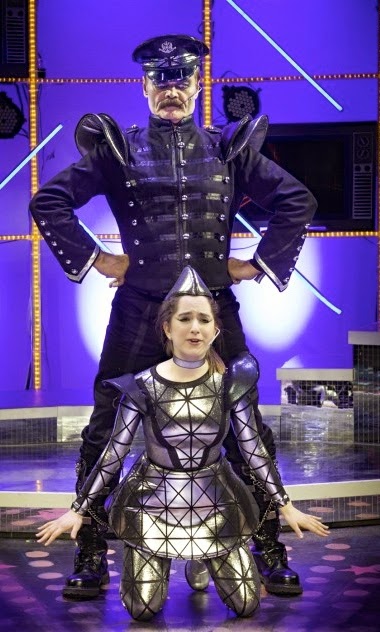 Cheesy musicals aren’t my thing. Unless, of course, they’re good cheesy musicals. Which is an apt description for The Anthem, the new Culture Project production that opened at the Lynn Redgrave Theater on Wednesday night.

It’s based, improbably enough, on Ayn Rand’s 1937 novella about a dystopian future in which nearly all individualism—including the right to choose an occupation or a lover—has been squashed by the state. The only holdouts are a band of renegades who live in the woods and a restless freethinker named Prometheus (get it?) who breaks with the collective and hooks up with the rebels to bring down the regime.
In other words, the plot is standard Rand. I think. For unlike just about everyone else who grew up as a bookish teen in midcentury America, I never read Rand’s novels “The Fountainhead” or “Atlas Shrugged.” I think I was too busy reading Sophocles since Antigone was my iconoclast of choice and, to be honest, the plays were shorter.

But I Googled Rand and the novella when I got home. The libretto for the musical, written by Gary Morgenstein, identified in the playbill as the director of communications for the Syfy Channel, seems to hew pretty close to the original plot, which fits right in with the world-has-gone-to-hell meme that now motivates 90% of the movies that come out of Hollywood.
That’s the cheesy part. The good part is everything added by Rachel Klein, who’s responsible for the direction, choreography and design of the production. It’s easy to spoof a story like this one, particularly given the evil-lady rep that Rand has in liberal bastions. But Klein keeps you guessing about where her political affinities lie and puts her energy into whipping up a diverting evening in the theater.

Except for the black-clad rulers of the society (one of them played by the guy who was the original Cowboy in The Village People) all the collective members are dressed in shiny silver outfits that make them look like hipster versions of the Tin Man from “The Wizard of Oz.”  Meanwhile the free spirits in the woods are channeling Cirque du Soleil.  And in more than just a sartorial way.
One of the best features of the production is that a sleek and nimble trio performs aerial acrobatics that are awe inducing. At times maybe too much so because I caught myself mesmerized by them when I probably should have been watching the main players. Although the entire cast is so incredibly toned and great looking that I found myself wondering what the casting notice must have read like.
Now, because this is a musical, I suppose I should talk about the music before I sign off. The score by Jonnie Rockwell (the playbill identifies her as the grandchild of the Czech composer Leoš Janáček) is standard pop-rock that defies you to distinguish one melody from the next.  Some of the lyrics by Erik Ransom made me smile. And the performers seem to be having a good time belting out the requisite “American Idol-style” anthems.

You’ll probably have a good time too if you go before the limited run ends on July 6.

Thank you for this review! I hadn't heard of this, and now I will make sure to get my butt there before July 6!

I'm delighted to have brought it to your attention. Please let me know what you think of the show if you make it there.

Wow! I think this Director, Rachel Klien is getting a mm lot of credit here and in other reviews for simply creating a loom. She fails so utterly and completely in many fundemental areas of directing that I have tp blame her for the wobbly unestablished tone, the laughably inept integratipn of the acrobatics, the pedestrian pacing and narrative thrust and the sloppy contol of actors...none of whom stylistically shared any foundatipnal conti uoty. Her 80 Days a few months had audiences sleeping and so did this one. Though many called ot a night at intermission. This could have been special but was in the wnd just 2plus hpurs of sloppy, self indulgent silliness with little understanding what its humor was truly about.

Anonymous, I'm sorry that the typos marred your comment but I think you still got your points across and I appreciate your taking the time to leave them here. I didn't think this was a great show but I think it would have been even less so without the stuff Klein added. Still, it's differences of opinions like this one that make theater worth seeing and talking about. Hope you have a better time at the next show you see. And I hope you'll comment here again too.