How "The City of Conversation" Spoke to Me 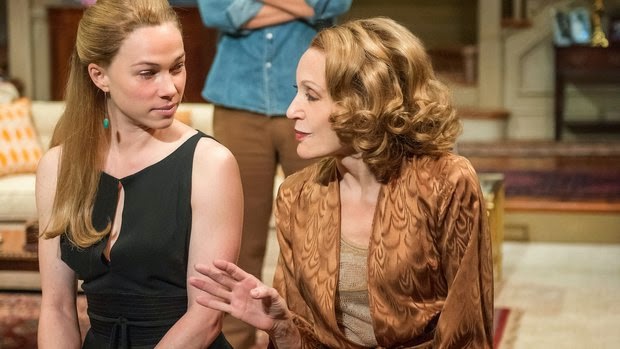 The City of Conversation, now at Lincoln Center’s Mitzi E. Newhouse theater through July 6, is the kind of show I love: a well- made drama about big issues and ideas that isn’t afraid to get a little schmaltzy. But, of course, love is almost never perfect.

Playwright Anthony Giardina has set his political drama in the Georgetown home of Hester Ferris, a celebrated Washington hostess who over the course of 30 years (from the waning days of the Carter administration to the optimistic evening of the Obama inauguration) witnesses—and experiences—the breakdown of civility between the parties that has created the stasis currently crippling our political affairs.
Hester is an unabashed liberal but, to her chagrin, her only child Colin falls in love with a diehard young Reaganite named Anna. The three establish a shaky détente held together by their shared love for the son Colin and Anna eventually have. It’s shattered by the 1987 battle to confirm Robert Bork for a seat on the Supreme Court which forces each of them to decide how much of a personal price he or she is willing to pay for political beliefs.

There’s inevitable soapboxing as the characters lay out their philosophical differences and there are some narrative glitches as Giardina struggles to cram in some familial subplots, including the dynamics between a power-player mother and a weaker-willed son who isn’t as clever or ambitious as she’d hoped he’d be and the symbiotic relationship between Hester and her meeker sister Jean.

But the acting is top-notch. Michael Simpson is appropriately milquetoasty as Colin and Beth Dixon is nicely nuanced in the underwritten role of Jean. But Hester is the juiciest role and Jan Maxwell is magnificent, squeezing every delectable drop from it (click here to read an interview with her).

Maxwell is particularly good at capturing the deceptive flightiness that women who came of age before the women’s movement often used to mask the flintiness of their ambitions. Those of you with memories stretching back to the last midcentury should think of political fundraiser Pamela Harriman or newspaper publisher Katharine Graham.
Alas, Kristen Bush has a more difficult job as Anna. A generation younger than Hester, Anna clearly is ready to break up the old boy’s club, speak for herself and realize her own ambitions. Her real-world cognate seems to be Ann Coulter but I wish Anna had been less of a one-note stereotype. But, perhaps wearing their own politics on their sleeves, Giardina and director Doug Hughes are content to use her primarily as a villain.

It may be fun, particularly for the liberals who make up the bulk of the Lincoln Center audience, to silently boo Anna’s stridency but doing so weakens this otherwise fine play and, here is where my love lessens, turns its arguments into the kind of black-and-white debate that The City of Conversation purports to speaks be speaking out against.

Labels: The City of Conversation