"Heathers The Musical" Is Mistimed Mayhem 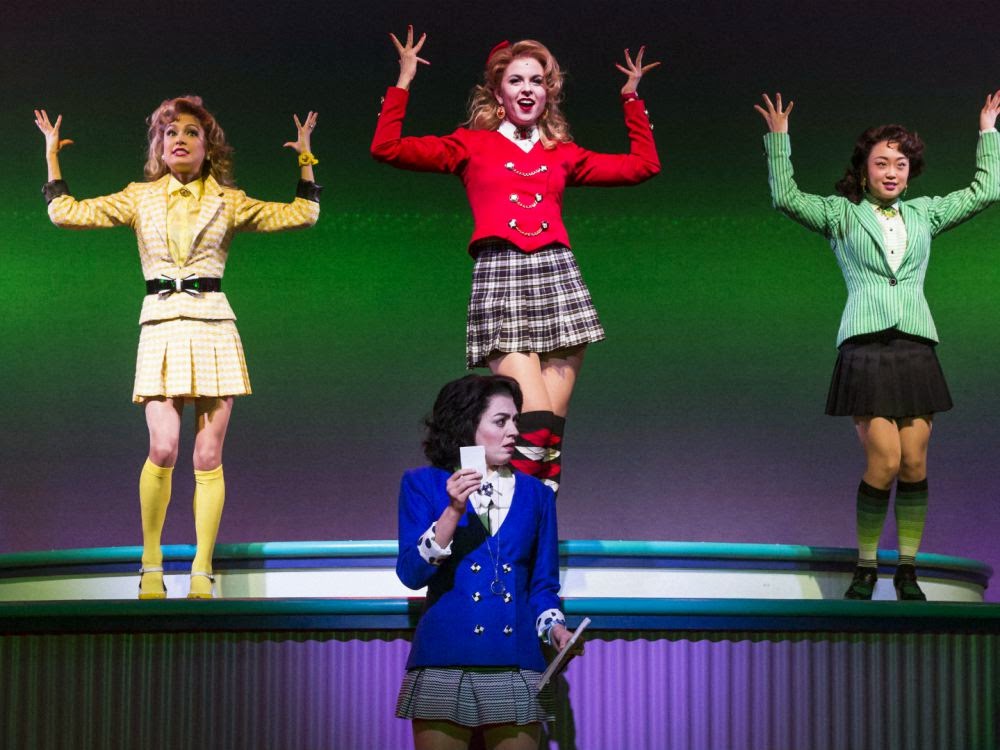 Some people (the Tea Party, the Republicans in the House) don’t mind being scolds but I find no pleasure in it, which is why I’ve taken so long to say anything about Heathers The Musical, which opened at New World Stages around the end of March.

In fact, reluctant to be a party pooper, I'd planned to just keep my mouth shut on this one. But when a couple of friends recently talked excitedly about getting tickets for it, I felt I had to speak out.

Now I should say that lots of people are getting a kick out of this show. The audience at the performance I attended lapped it up, although it was a Friday night and many of them were taking advantage of the theater’s service of delivering booze to people right in their seats. Still several critics, whom I’m assuming were sober, liked it too (click here for the New York Post rave).
Heathers is based on the 1988 cult film of the same name, which starred Winona Ryder as a girl named Veronica who wangles her way into the popular crowd at high school (a trio of pretty rich girls all named Heather) but then falls for Christian Slater’s J.D., an iconoclastic outsider who wants to take down the cool kids. Literally.

Fans of the movie loved its nihilism (click here for an oral history of the film) and fans of the new musical like the fact that it has preserved the movie’s dark undercurrent.

But in the quarter century since "Heathers" came out, there have been the massacres at Columbine, Virginia Tech and Sandy Hook Elementary School. And so I squirmed in my seat, when, between the goofy jokes and gyrating dance numbers, J.D. knocked off kid after kid.

The creative team wasn’t blind to the problem and they give Veronica and J.D. back stories to make them more sympathetic (click here to read more about the changes). But there’s not much they can do with the central revenge premise and it’s still unsettling to see a guy in a long dark trench coat like the ones the Columbine killers wore point a gun at a group of teens in the middle of what’s presented as a feel-good musical.

Still, there is talent involved in this show. Kevin Murphy and Laurence O’Keefe may fall back on the usual high school stereotypes (bitchy queen bees, dumb jocks, dweebie smart kids, a Goth girl who just wanders around the stage with nothing to do) but they’ve written some appealing songs with clever lyrics.
Meanwhile, working with an apparently tiny budget that didn’t allow for much of a set and a big multicultural cast of 19, most of whom are making their New York debuts, director Andy Fickman has created some flashy, audience-pleasing production numbers.

But best of all is Barrett Wilbert Weed, who plays Veronica with the kind of spunky charm that calls to mind a younger Sutton Foster. I’d love to see Weed in something else, maybe as Little Sally in a revival of Urinetown, whose dystopian fantasy is still something that one doesn’t need to feel queasy for laughing at.