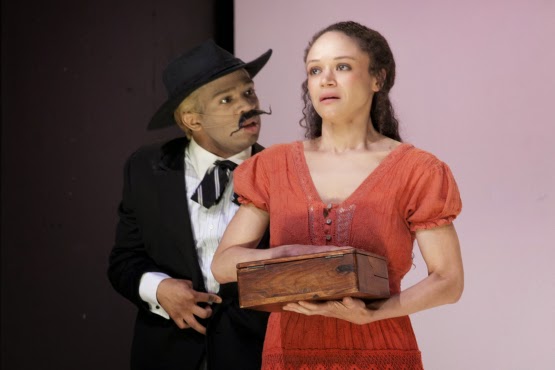 The first time I saw An Octoroon it was a hot mess. Its director had quit the show, then called The Octoroon: An Adaptation Of The Octoroon Based On The Octoroon, two weeks before it was scheduled to open in 2010. Its playwright Branden Jacobs-Jenkins took over even though he had never directed before and, in the process, cut his two-and-a-half-hour play down to a confusing 90 minutes. The result was that embarrassed-looking actors wandered aimlessly around their P.S. 122 performing space and one cast member even sent out an email blast, leaked to The Village Voice, in which he declared the show “a piece of crap" (click here to read the whole thing).

So it took balls, even for an adventurous company like Soho Rep., to mount this new production, which is scheduled to end an extended month-long run on June 8.  Sarah Benson, Soho Rep.’s artistic director, staged it herself. And what a difference a clever and experienced director has made. This production, restored to 2 hours and 20 minutes, is brazenly provocative and totally engaging.
An Octoroon is a mash-up that mixes the 19th century Irish playwright Dion Boucicault’s sentimental melodrama about the forbidden romance between a slave girl who is 1/8 black (hence, the title) and the white man who loves her with the antic, postmodern sensibility of Jacobs-Jenkins.
As he did with Neighbors whose characters include Sambo and Topsy (click here for my review of it) and the more recent Appropriate about a white family that inherits lynching memorabilia (click here for my review of that one), this young African-American playwright takes great delight in pushing his audiences outside their comfort zone and dares them to think in fresh ways about race.

His version of the tragic mulatto story features a black actor who starts off the show pretending to be the playwright (called BJJ in the playbill) and then dons white face to portray both the title character’s noble white lover and the moustache-twirling villain who also desires her.

There's also a disquieting slave auction and a mysterious figure who is silent, wears a Br’er Rabbit mask (he's rumored to be Jacobs-Jenkins, whom I spotted slipping backstage a few moments before the performance my theatergoing buddy Bill and I saw) and serves as the stagehand who cleans up between scenes. Kudos to Mimi Lien’s deceptively simple set.

Mewanwhile, the cast is superb, with black actors performing in white face, white actors wearing blackface and red face to portray Native Americans and a few actors appearing with their own faces.

Chris Myers, who reminded me of a young Jeffrey Wright both in appearance and acting prowess, is a marvel, particularly in one scene in which two of his characters amusingly, and yet convincingly, have a fight with one another.
Jocelyn Bioh and Marsha Stephanie Blake provide much of the sly humor as two female slaves who use contemporary argot to complain about their lives (“girl, you are not your job,” one tells the other) and provide Greek-chorus-style commentary on the plot.
The only hold over from the original production is Amber Gray, who plays the titular octoroon (click here to read an interview with her). Gray’s pointedly sincere interpretation of the character wouldn’t have been out of place in Boucicault’s original production back in 1859, except that back then all the black parts were played by white actors wearing black face.

Like the artists Kara Walker and Fred Wilson, Jacobs-Jenkins takes stereotypes about black people and spins them into perceptive parables on how and why these tales have been told. This is the second of his plays I’ve seen this spring and I'm hoping that he's a fast writer because I can hardly wait for the next one.