"The Tribute Artist" is Stuck in the Past 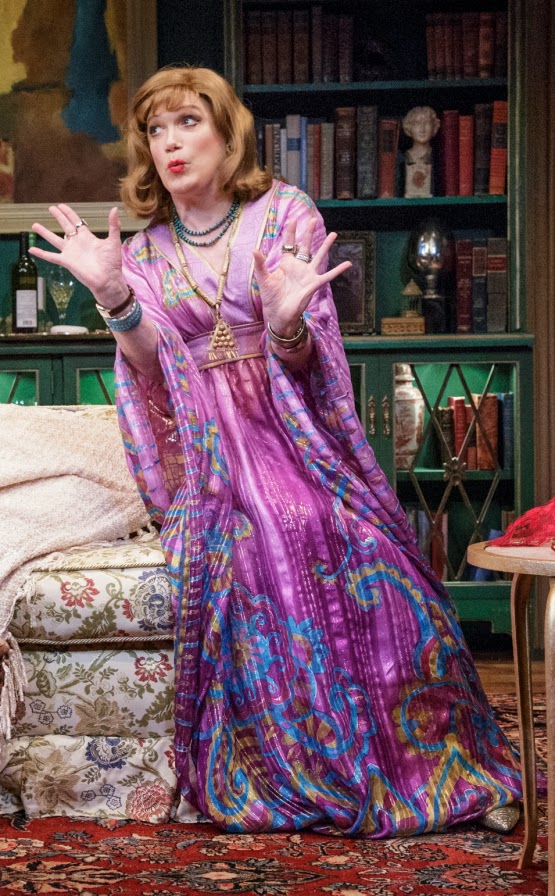 Drag queens have long played a central role in gay life. In the old almost-everybody-in-the-closet days, they provided a way for gay men (those who dressed up as women and those who simply applauded them) to revel in their specialness and defy those who tried to squash it.  And, of course, the queens were on the front lines (and reportedly among the fiercest fighters) at the Stonewall riots that sparked the gay liberation movement.

But the mood is less flamboyant nowadays as more and more same-sex couples in this country can marry, raise families and be as humdrum as everybody else. So I was curious about The Tribute Artist, the new comedy by Charles Busch that centers around the titular drag queen who is fired from a longtime Las Vegas gig because audiences are less and less interested in seeing a man impersonate old movie divas.
But life seemed to imitate art the night my theatergoing buddy Bill and I saw The Tribute Artist, which Primary Stages is presenting at the 59E59 Theaters through March 16. For there were only occasional titters here and there in the audience as Busch and his fellow actors hammed it up in a plot similar to Loot, Joe Orton’s sardonic farce about corpses and cash that was itself limply revived earlier this year (click here to read my review of that one).

In Busch’s even more convoluted version, Jimmy, the recently fired drag queen, or as he prefers to be called tribute artist, assumes the identity—and flowy gowns—of his elderly landlady when she dies in her sleep. He and his best friend, a lesbian real estate broker, figure they can quickly sell the childless woman’s Greenwich Village townhouse (luxuriously designed by Anna Louizos,) split the money and live happily ever after on Easy Street.

Their plan begins to unravel when the dead woman’s estranged niece shows up with her transgender son (née Rachel, now Oliver) to claim the house. They’re followed by a shady ex-lover of the landlady’s who also wants a piece of the action. Hilarity is supposed to ensue. But it doesn’t.

Too many of the jokes depend on the exact kind of campy knowledge about old movies that fewer and fewer people have (even this year’s Oscar montages cut back on clips from movies made in the ‘30s and ‘40s) and too many of the other lines simply aren’t as funny as they must have seemed to Busch when he dashed them off.
The script makes no sense and Busch fills it with clunky exposition as he tries to explain what’s happening. What saddens me more is that he shies away from the issue of whether there is any room for drag queens in today’s gay society. Maybe it’s just too scary a question for a man who has spent so many years putting on dresses to face head-on.

He gets little help from his frequent director Carl Andress, except, perhaps, for the choice of some bouncy interlude music. The cast is filled with Busch regulars too, including his good pal Julie Halston (click here to read a piece about their longtime collaboration). But nearly everyone has played so many previous incarnations of his or her current character that they all seem to be operating on autopilot.

Busch is a charming guy and a beloved figure in certain corners of the theater world and so the professional critics have strained to be kind in their reviews (click here to read some of them). The couple sitting next to me clearly wanted to like the show too. They leaned forward eagerly as it began but before the first act finished, one of them had fallen asleep so soundly that he didn’t even wake up during the intermission.

The man’s partner later roused him and they did seem to get a kick out of the second-act references to Norma Shearer, Rosalind Russell and Mary Astor. If you’re wondering who those women are, you can click here for a handy guide the New York Times has helpfully put together.  Or you could just decide that this show isn’t for you.