How I Fell in Love with "Stage Kiss" 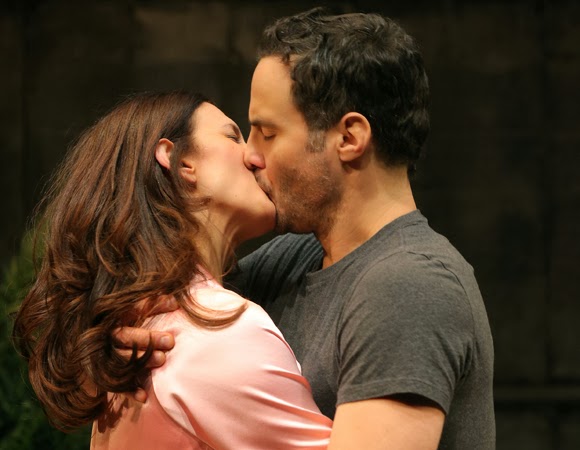 Almost everything—the acting, the directing, the costumes, the set, and most especially the play itself—works in Stage Kiss, the romantic comedy now running at Playwrights Horizon through March 23.

And I couldn’t be happier about that because I’ve been wanting to see this play ever since it premiered in Chicago three years ago. Like most theater junkies, I love a backstage show but I was particularly curious about this one because it centers around a question I’ve long wondered about: what is it like for actors when a play requires them to kiss one another night after night?

That question is further complicated in playwright Sarah Ruhl’s multi-layered rumination on the illusion of love. Here’s her set-up: two mid-career actors, once lovers, are cast in a play about two middle-aged people who were once lovers. The line between their onstage and offstage lives quickly—and hilariously—blurs.
The play-within-a-play is a deliberately ridiculous melodrama set in the 1930s (the costumes and set manage to be simultaneously swanky and silly) and the antics of getting the show on and getting the lovers back together make for great farce, particularly the rehearsal sequences in which an effeminate understudy has to step in for the macho leading man. But Ruhl has more on her mind than just funny business.
Both the erstwhile lovers have moved on to other relationships—she a marriage to a banker with whom she has a teen daughter; he now dating a schoolteacher who would like something more permanent—but they have become restless with their status quo and are seduced into thinking that things might have been different if they’d made other choices.

And here's where the play becomes something more than just an enjoyable trifle because Ruhl knows that such romanticizing of roads not taken is an inevitable side effect of growing older and that it can be easy to confuse the stories we tell ourselves about love with the real thing (click here to read an essay she wrote).
Stage Kiss can be a little too on the nose about all of this. The characters occasionally lay out the themes in speeches that seem as though Ruhl doesn’t trust the audience to put two and two together. But she does so much else well that these lapses can be forgiven.
Ruhl and director Rebecca Taichman have done four plays together and Taichman not only gets what Ruhl is aiming to do with Stage Kiss but enhances it with smart staging that pays equal attention to both the laughs and the longing.
And the casting is just as pitch-perfect. Jessica Hecht has often come off as too affected for my taste but her tics—the little girl voice, the fluttery mannerisms—are just right here and she is totally enchanting.

Dominic Fumusa, familiar as the put-upon husband in TV’s “Nurse Jackie,” deftly balances the bravado and insecurity of a guy who refuses to grow up because doing so will be an acknowledgement that he may not be good enough to realize his dreams.

The supporting players are terrific too. Patrick Kerr is a hoot as the clueless director of the ‘30s melodrama and Michael Cyril Creighton just about steals the entire show in a series of roles, including the fey understudy. This is one case where the doubling and even tripling of roles actually contributes to the show.
The production is punctuated with musical numbers performed by a piano-playing crooner in a tuxedo. His final song is a rendition of Rodgers and Hammerstein’s “Some Enchanted Evening.”  Which pretty aptly describes Stage Kiss.