A Very Nourishing "Dinner with Friends" 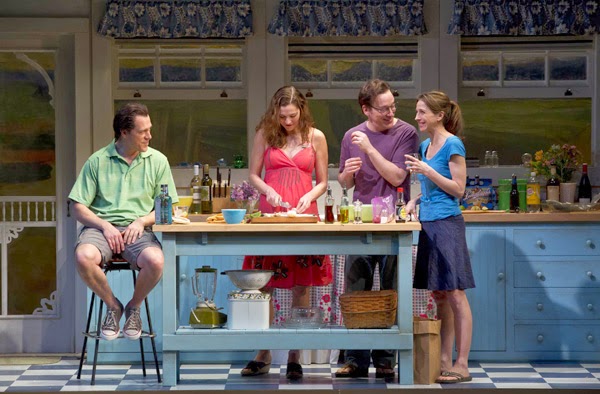 If you asked a random sampling of playgoers to list the best living playwrights in the country today, names like Edward Albee, Tony Kushner and Sam Shepard would come up long before anyone got around to thinking about Donald Margulies, whose play Dinner with Friends is enjoying a superb revival that ends next week at the Roundabout Theatre Company’s Laura Pels Theatre.

The oversight may be because Margulies’ plays aren’t brawny or genre-breaking like those of his contemporaries. And yet his small relationship dramas—Time Stands Still, Collected Stories, Sight Unseen, The Model Apartment—never fail to hit me in the gut.

The story for Dinner with Friends, which won the Pulitzer back in 2000, is simple: the friendship of two fortysomething yuppie couples (a pair of food writers, a lawyer and a would-be artist) is shaken when the husband in one pair decides to leave his marriage for a younger woman.
Of course, that kind of domestic drama plays out in real-life almost every day and some critics have dismissed Dinner with Friends as light fare. But I saw the original production of the play back in 1999 and the movie version made two years later and I was surprised each time by how deeply the story moved me. And this time was no exception.
For Margulies examines the ways in which people relate to one another with an unflinching, honesty. Most of us have, at one time or another, had to decide how much we’re willing to compromise for the sake of our partners, how much we’re willing to give in exchange for the companionship of our friends. Margulies takes those choices seriously and he treats them sensitively.
All four of the characters in Dinner with Friends offer actors the chance to stretch their dramatic—and comedic—muscles. And, under the sure-handed direction of Pam MacKinnon, the four in the current cast are uniformly excellent. The divorcing husband and wife are played by Darren Pettie and Heather Burns, who bring just the right amount of tone-deaf narcissism to people long unhappy with their lives and suddenly liberated by the realization that misery isn’t the only option.

But the soul of the play manifests itself in the way the other couple reacts to the changes in the relationships the foursome have shared. Marin Hinkle, working her way onto my MVP list (click here to read a Q&A with her) and Jeremy Shamos, who is already one of my faves  (click here to read an interview with him) are achingly affecting as their characters struggle to reestablish the complacency that has allowed their own marriage to survive.

I saw Dinner with Friends alone and I could hardly wait to get home and wrap my arms around my husband K. And even though I’ve been known to gripe that there are far too many plays about yuppie woes, I also can hardly wait to see The Country House, the new Margulies play that Manhattan Theatre Club just announced it will produce in the fall. I'm betting it will offer more nourishing food for thought.