"Middle of the Night" Turns Out to Be Timeless 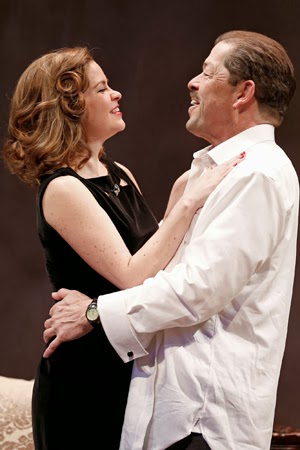 When a revival doesn’t work, people often say it’s because the show has outlived its time.  Well, we no longer live in a time when the marriage of a Jew and a gentile would be a scandal, when men wear hats to work and women put on shirtwaist dresses to play canasta at afternoon card parties or when working class people could afford large apartments on the Upper West Side. And yet, the Keen Company’s new production of Middle of the Night, which opened this week in The Clurman space on Theatre Row, is just as affecting as the original production was when it premiered back in 1956 and ran for over a year.

A large part of the credit for its continuing success goes to the play’s author, the great Paddy Chayefsky, who wrote scores of scripts during the Golden Age of Television, including the teleplay for “Marty,” which he later turned into an Academy Award-winning movie, and the screenplay for “Network,” which picked up four Oscars of its own.
Today's top writers celebrate the antihero, like those on the TV shows "Breaking Bad" and "Mad Men" but Chayefsky specialized in the lives of ordinary men and women, the kind of people he knew when he grew up in the Bronx during the ‘30s. He turned their New Yawkese into poetry, their yearnings for love and dignity into drama.

Middle of the Night tracks the unlikely romance between a 53-year-old Jewish widower named Jerry and the 23 year-old gentile receptionist Betty who works at the factory he owns. Her mother and recently estranged husband (a jazz musician who’s always on the road) want the affair to end. His grown daughter and over-protective sister aren’t crazy about the relationship either.
The audience needs to be won over as well. Which it is by this small-scale but big-hearted production. And a large part of the credit for that goes to the sensitive direction of Keen’s artistic director Jonathan Silverstein and a moving performance by Jonathan Hadary in the leading role originated by Edward G. Robinson.

The rest of the Keen cast is uneven. Although to be fair, they may have been hindered by having to double in roles (even the set does double duty with only the lowering and raising of a chandelier signalling a change in apartments). At one point, I found myself wondering what Jerry’s sister was doing in curlers at the apartment that Betty shares with her mother and younger sister.
I also would like to have seen a little more chemistry between Hadary and Nicole Lowrance, who steps into the Betty role that a young Gena Rowlands played in the original production. But Hadary and Lowrance still manage to be sweet and oddly touching as two lonely people awed to discover that they might have found a soul mate.
Anyone who has watched “Network” knows that Chayefsky had a knack for being ahead of his time and Middle of the Night is surprisingly frank about sex, be it Jerry’s fear that he won’t be able to satisfy a woman so much younger or Betty’s dismay that lovemaking is the only thing that worked in her marriage to the jazzman.

Such open talk probably raised eyebrows back in the ‘50s but it makes this old-fashioned play seem comfortably contemporary, despite the pointy bras and stiff crinoline slips the women wear. Its unabashed sincerity also helps Middle of the Night transcend time.

Labels: Middle of the Night

This look so good, I think I will have to look for some theatre tickets for this most certainly! Thanks for the great blogs -- its really useful

Hi Bob. Thanks for the kind words and for taking the time to leave them. I hope you get a chance to see the show and would love to know what you think of it if you go. Cheers, jan