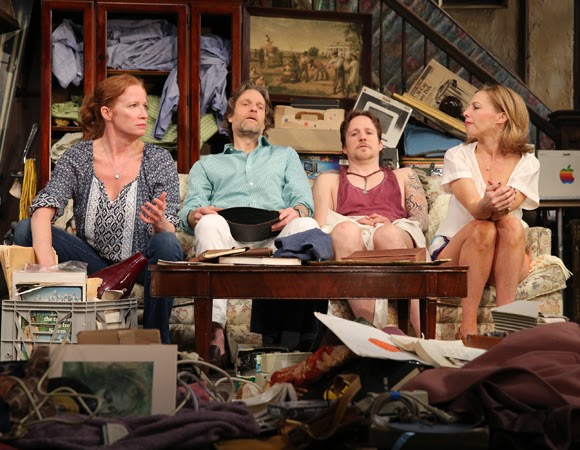 The two previous plays by Branden Jacobs-Jenkins that I’ve seen– Neighbors and The Octoroon: An Adaptation of the Octoroon Based on the Octoroon—featured black actors wearing black face and portraying stereotypical characters like Sambo, Topsy, Mammy and a tragic (is there any other kind) mulatto.

But all the characters are white in Appropriate, Jacobs-Jenkins' new play that opened in The Griffin theater at The Pershing Square Signature Center on Sunday.  And yet, the people in Appropriate are as haunted by this country’s racial past as those in his other works.

Appropriate’s set-up will be familiar to anyone who has seen a domestic drama over the last 50 years: a family gathers at the death of its patriarch and the siblings and their spouses squabble over their financial and emotional patrimony.
Jacobs-Jenkins has acknowledged his play’s kinship with Tennessee Williams’ Cat on a Hot Tin Roof, Horton Foote’s Dividing the Estate, Tracy Lett’s August: Osage County and all the other dysfunctional family classics. Hence, I suppose, the title if you pronounce it "Appropri-EIGHT".

But the roots of the dysfunction here are distinctly different because this time they’re being cultivated by a young African-American playwright. The family Jacobs-Jenkins has imagined is the Lafayettes, an Arkansas clan descended from once-powerful slaveholders. But time has not been kind to them.
Toni, the eldest, is divorced, recently fired from her job as a high school principal and losing the affection of her teenage son. The middle child Bo has escaped to New York but is married to a shrill wife, has two unruly kids and a writing career that’s sliding downhill. The baby brother is a pedophile, long estranged from the family but desperate for redemption.

The only things the siblings now seem to have in common are a desire to sell the decrepit plantation home in which they grew up and a discomfort with the collection of racist photographs they find among their father’s belongings. None of them seems to know what to make of—or do with—the unexpected discovery.
Jacobs-Jenkins, a Princeton grad who grew up in an affluent family (click here to read more about him) clearly wants to show how racism can have as corrosive an effect on the children of former slaveholders as on those of former slaves.

His approach is more nuanced than one might expect—or than some critics have given him credit for. Almost every character’s bad behavior is balanced with some good: even the father who may have been a bigot is remembered as a loving parent, at least by his eldest child who deeply grieves his passing.

But the play is not all gloom, doom and white guilt. Many of the interactions between the family members are laugh-out-loud funny. Director Liesl Tommy has smartly cast actors who look as though they might actually be related to one another and she has skillfully guided them to create the kind of lived-in familiarity common to people who know one another so well that it breeds not only contempt but also caring.
The performances are all good, from stage vets like Michael Laurence and Patch Darragh to newcomers like Mike Faist and Sonya Harum, even if Johanna Day’s Toni at times too closely resembles Amy Morton’s unforgettable performance as the eldest sibling in August: Osage County.

And the work by the creative team is just as accomplished, particularly Lap Chi Chu’s supple lighting and Broken Chord’s resourceful sound design, which ranges from the grating stridulation of crickets to the almost perceptible whispers from the graveyard that sits just a few yards away from the old house.
Appropriate is messy in spots (Jacobs-Jenkins struggles a bit to keep up with the myriad story lines of his eight characters) and it's sometimes overly noisy (“Get ready for a whole lot of shouting,” a friend told me before I saw it). But the walk-up to the sesquicentennial of the Emancipation Proclamation has been surprisingly quiet and so it seems totally appropriate (pronounced appropri-ette) to have this play making some noise about the work all of us still have to do to liberate ourselves from the legacies of the past.